What's the current thinking on arch support in shoes?

I’ve never really understood the logic behind arch support in shoes. Based on my understanding of how arches in general work, it seemed counterintuitive. Some years ago, the whole barefoot running thing seemed to validate what I’d always thought, but that seems to have fizzled out.

The foot does not naturally support pressure in the arch region for obvious reasons, and supporting the arch can actually result in more problems beyond not addressing the fundamental issue which is a lack of strength in the arch, and specifically in the Tibialis posterior which is the primary muscle tensions the foot while standing or walking. Because in industrialized societies most people spend a significant amount of time sitting or standing in place, and because we generally wear shoes with a rigid sole that does not allow the foot to flex while walking, the muscle is often underdeveloped leading to “floppy foot” (e.g. fallen arches or “flat feet”).

The problem with barefoot running is twofold; one, people often try to start running barefoot or in thin-soled shoes without developing the muscles and tendons of the foot, which is like trying to start weightlifting by doing a heavy military press without first developing your squat and clean. If you want to get into barefoot running, you need to first start walking in progressively longer segments barefoot/thin-soled shoes, and once you’d developed enough to go a few miles at a walking stride, start all over again with running while learning the sprinter’s pose rather than the flat-footed style that joggers run with (and definitely avoid heal striking if you do that in running shoes). The second is that most people run on hard pavement surfaces, which have no give and can be very hard on the ligaments of the foot, eventually straining or tearing them. The solution to this is to run on softer ground (running track or dirt trail) rather than on a paved surface, just as you do not jump rope on concrete.

Improving foot strength and flexibility is largely a matter of doing things that…well, strengthen the foot in different body positions and movements. Some of the best ways of doing this are bodyweight squats, jumping rope, and kettlebell swings, all of which force you to use your feet to counteract dynamic imbalances. As long as there are not other pathologies affecting the foot (missing or undeveloped bones and ligaments, permanent damage, et cetera) fallen arches can almost always be remediated by strengthening exercises, and a good occupational therapist or certified physiotherapist can help with setting up a program for this.

Here’s a podcast on the topic. 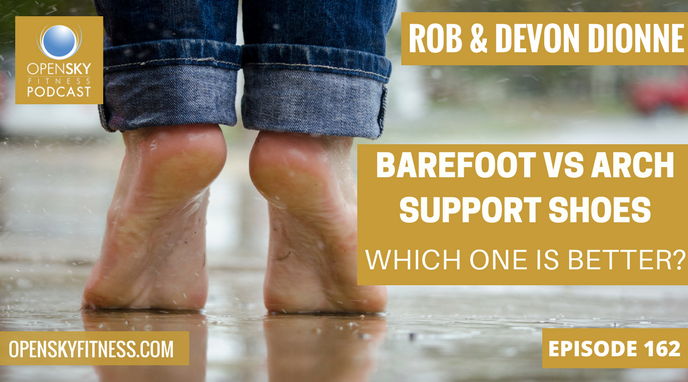 Why Barefoot or Arch Support Shoes? On today’s episode of the Open Sky Fitness Podcast, Devon and I are tackling the ultimate clothing question: Is it better to walk or exercise while wearing barefoot, minimal shoes are shoes with tons of arch...