I saw a car yesterday that they didn’t even sell here in the US: a Nissan Figaro. I can guarantee that car gets a lot of attention.

Yesterday, driving down highway 1 I passed an MG A heading the other direction.

Today probably the most interesting was a 1958 Impala that drove by while I was sitting on the motel patio having breakfast.
Other honorable mentions are a 2nd gen VW bus with Mercedes hubcaps, including on the front mounted spare tire, and a mid 1960s Rambler American. The Rambler was rather rusty for a California car, but it was 2 blocks from the beach.

A 55 Chevy wagon (not a Nomad), with patina’d paint and a ladder tied to the roof.

It wasn’t a full-on rat rod (thank goodness), but I’m not sure what they were going for. If I owned it, if nothing else I’d give it an Earl Schieb job to tide it over until a real paint job.

Yesterday on my bike ride I saw a red Viper with a large wing, looked like one of the special packages or a really nice aftermarket addition.

Later in the ride I saw a canary yellow Lamborghini Huracán, at least I think that’s the right model. I don’t think it was an Aventador.

I forgot to post earlier, but the day before yesterday I saw a 1990s Acura NSX (with the pop up headlights) in my rear view mirror as I was driving into Monterey.

Last night, a Ferrari, I’m pretty sure a Portofino, parked on the street. It appeared to be brand new as it still had the temporary paper license plates.

I’ve not seen a lot that’s interesting lately, having still been out a lot less than usual (and not thought to post much of what I have seen). But I live in an area where I tend to see (in normal times) quite a lot of “exotic” sports cars, enough that even if I were posting a lot I’d still not mention all of them.

To illustrate this, I popped to my corner shop last week - two minutes’ walk from my flat, ten minutes trip total, probably. As I turned the corner of my road, I saw from the corner of my eye something red and interesting-looking coming off the nearby roundabout into a cul-de-sac off the main road, but thought nothing of it. Shortly afterwards it came back out and was a Ferrari 488. Which, by standards round here, is not necessarily that interesting, but the fact that I saw a Ferrari 488 during the very short walk from my flat to the corner shop illustrates the sort of cars one often sees round here. (The best car I’ve seen while walking to the corner shop was an Aston Martin DB6 Volante once… I’d seen what must have been the same car in the area, although several miles away, before, but wasn’t expecting to see it drive past the end of my road.)

(Hmm, is this “guest” business plus the suffix to my user name connected to the board upgrade? This is probably the first time I’ve posted since then… it might explain why the board didn’t recognise my password, and then when I tried to change it to what I thought it had been anyway, told me I couldn’t do that because that was already my password…! Oh well.)

Saw a white Sunbeam Alpine last weekend, it was a warm day and the convertible top was down. I’ve just started watching the “Good Karma Hospital” tv series and one of the lead characters drives the same car, so it was a double-double take for me.

I spotted a rust colored (and rust covered) Porsche 944 with antique license plates. I thought the 944 was much older, but the last production year was 1991.

But I live in an area where I tend to see (in normal times) quite a lot of “exotic” sports cars, enough that even if I were posting a lot I’d still not mention all of them.

I’m jealous! I live in an area full of university profs, and they’re not known for wild cars. Anybody want to hear about the twenty Subaru Outbacks and thirty Priuses I saw today?

It took going on a road trip last weekend to see anything interesting, and I was surprised by all the hot hatches and GTOs and Fast ‘n’ Furious cars in the far north… Maybe there’s not much else to do?

Back home, the best I could spot was a Saab 900 Turbo…

Two days ago I saw this beautiful Mercedes 190SL in Santa Barbara, California. I’d seen it being driven earlier that evening as I was heading to dinner, and was delighted to find it parked as I was walking back to my hotel after dinner. Too bad the lighting wasn’t all that great. 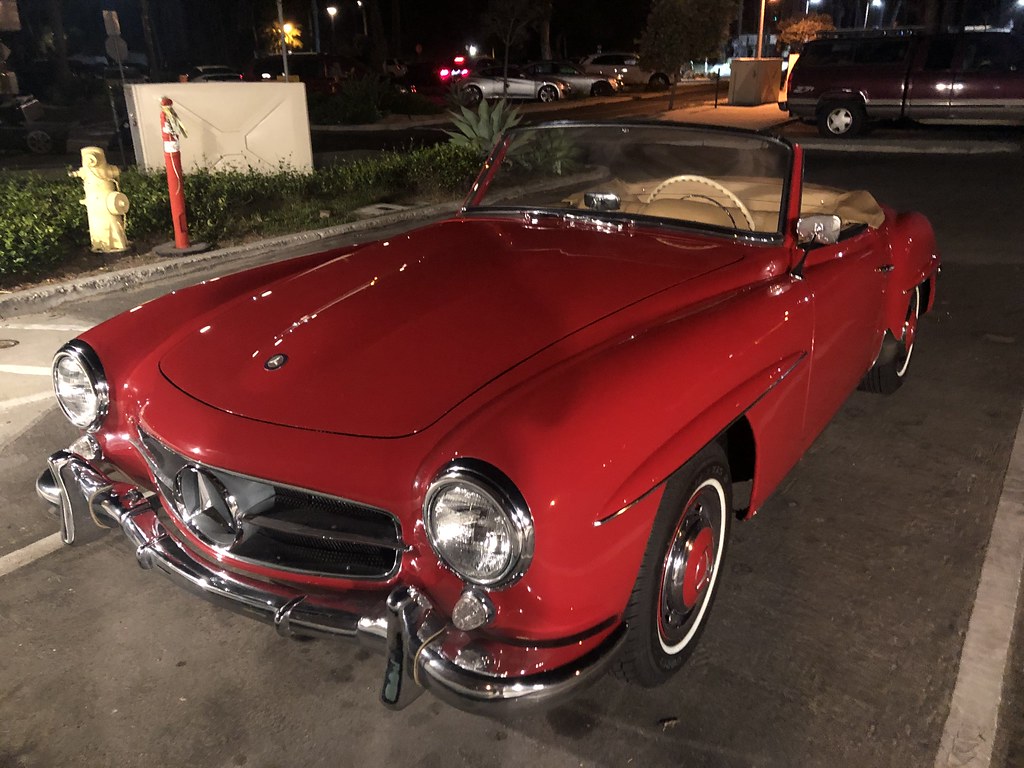 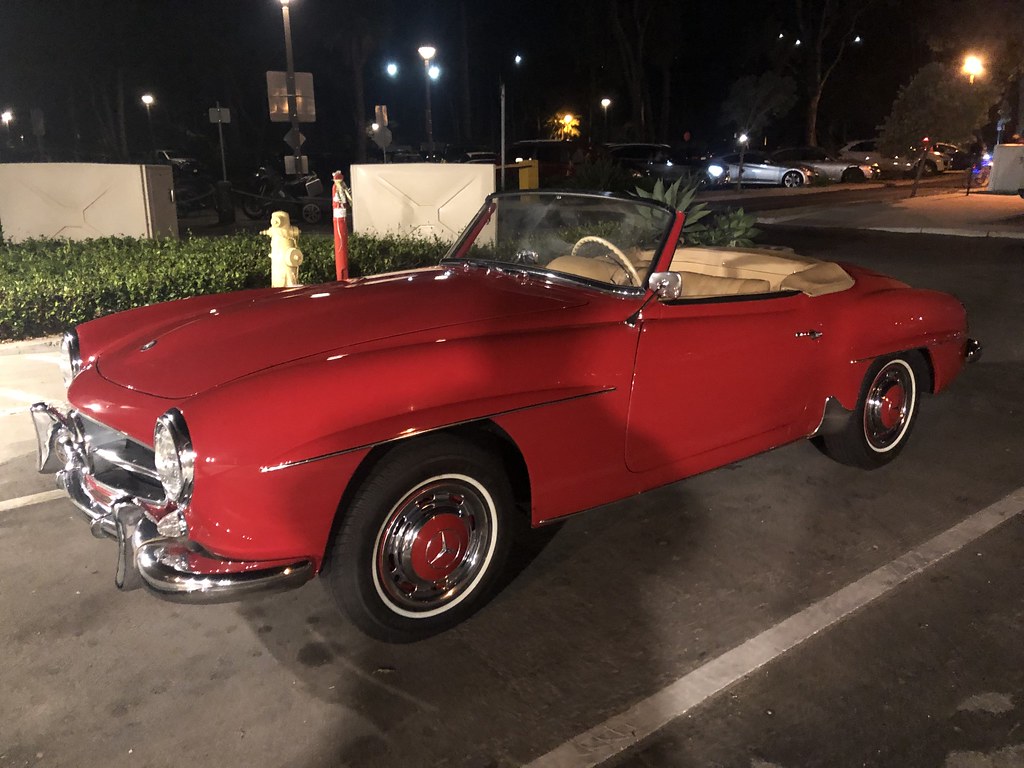 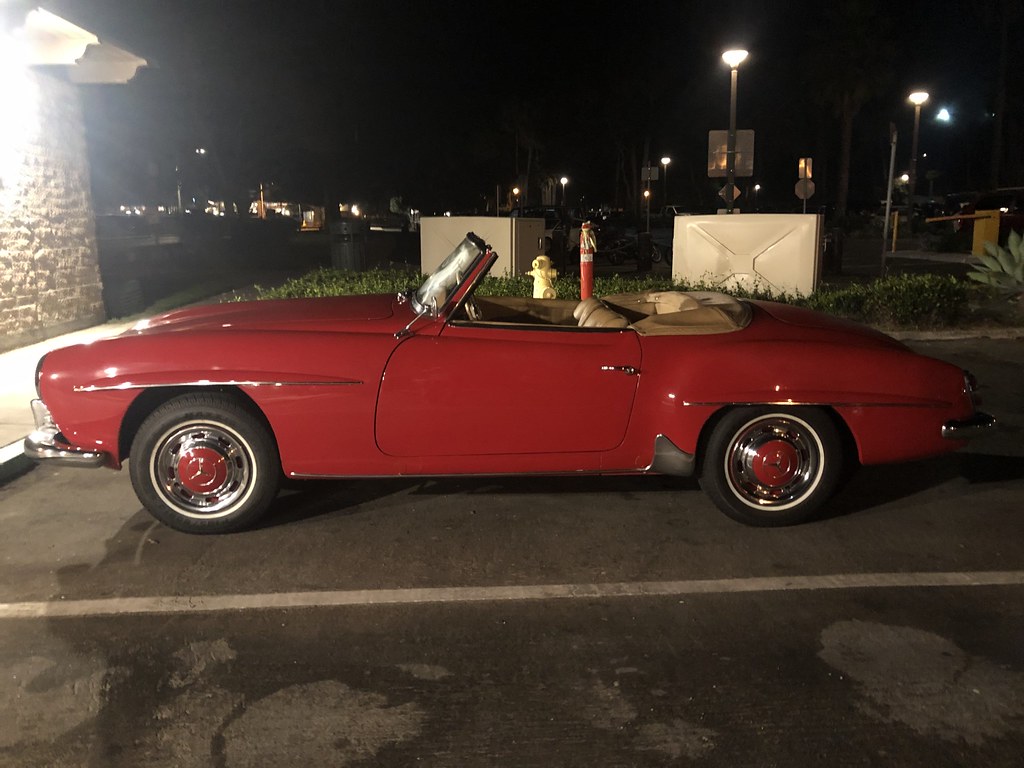 On the route I take when I walk my dog Reno in the morning, there’s been an old Blue Bird school bus parked in the street for the last few weeks. The bus is painted blue and features the word DEPARTED on the marquee space in front. Over the rear door, the phrase STELLA BLUE 2 appears. The vehicle gives off a “Halloween party bus” vibe, so I’m curious to see if it’ll be gone once October turns to November.

University professors not noted for wild cars? That’s news to me.

I’m not saying that they drive Hypercars or anything, but I’ve seen more than one E-Type Jaguar, the only Citroen SM I’ve ever seen in person, various ‘60s-era Mercedes and BMWs, and a Bertone (not Fiat) X1/9, and that list is hardly exhaustive. Of course, I live next to a reasonably prestigious college, so that might have something to do with it.

I’m jealous! I live in an area full of university profs, and they’re not known for wild cars. Anybody want to hear about the twenty Subaru Outbacks and thirty Priuses I saw today?

Ha, well I might be exaggerating a bit perhaps… although I used to post on a different board with a similar thread and really did stop mentioning every Lamborghini or Ferrari I saw on that one…! And Aston Martins (modern ones anyway) were cars that I saw almost every day - if I go out, they still are.

The most interesting car I saw this week during my three short trips to the supermarket was a Reliant Scimitar, I think…!

The best car owned by somebody in my road is a gold-coloured Porsche 944. He recently had it refurbished with chrome rims and had the suspension lowered, and also that annoying modern thing where they turn the front wheels in at a noticeable angle at the top… that last aspect spoiled it a little for me, but it’s still a great car. (I wouldn’t usually approve of its being in shiny gold, either, but since it’s a 944 and not a modern supercar I think he gets away with it - it’s more “I like cars and this is my fantasy!” rather than “Look how rich I am!” It’s gold paint, not gold foil plating!).

The most exotic modern car I’ve ever seen on the street was a LaFerrari in Mayfair once - and that was a special trip I’d taken to deliberately look for nice cars during the “summer supercar” season in London; that isn’t where I live.

Although that’s not quite the most exotic - I’m still not entirely sure about the most exotic myself, so I’m not expecting others to believe it: I was in Munich for Oktoberfest in 2018 with some friends, and we took a tourist bus trip one day (Monday 5th October, early afternoon) out to the former Olympic Park and then to the Allianz Stadium. Between those two, we stopped at a junction, and from the top of the bus I saw something very exotic, low and yellow with a black roof going past on the cross road. I couldn’t identify it as anything I knew or could think of at all.

Eventually, after looking at lots of obscure supercars, I found the Apollo Arrow and thought “Aha, that was it! It was an Apollo Arrow!” The wikipedia picture was even the same colour as the thing I’d seen, as well as correct in every detail I could remember (although I didn’t remember the rear wing - I might just have missed it). Then I looked a little closer and realised that was a one-off prototype, not a production car, and thought “Oh, back to the drawing board then… it can’t have been that”.

Then I looked a bit more and realised that the Apollo factory was in Denkendorf, a hundred kilometres (sixty miles) or so up the autobahn from Munich, and the car I saw was heading towards the autobahn in that direction. So if one was to see that car on the road anywhere in the world, I was in one of the most likely places to do so. And if it wasn’t that, then it must have been a custom bodywork job that somebody had made to look like that on a similar exotic chassis and was then driving about within easy distance of the factory that had made the original - which almost seems less likely than just seeing the original in the first place.

TLDR version - I think I saw the Apollo Arrow prototype out on the road once on the north edge of Munich, but am not expecting anybody else to believe that because I am not convinced myself either.