What's the use of non-double-acting baking powder?

I saw it in the store and I didn’t even realize it existed. What would you use it for?

I saw it in the store and I didn’t even realize it existed. What would you use it for? 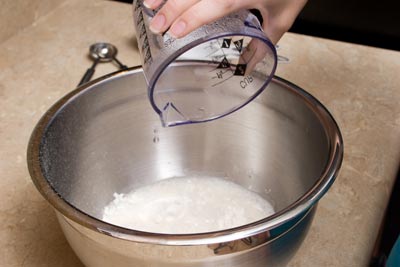 What Is Baking Powder, and How Does it Work?

Baking powder is an essential ingredient when preparing and making baked goods. As a leavening agent it gives volume and a fluffy texture to muffins, breads and cakes.

When using “Single Acting” baking powder, the chemical reaction, once again, takes place in the bowl at the mixing stage, with the catalyst being any liquid as opposed to an acid, so the same applies as to the speed at which you get the mixture into the oven. Remember, the acid is already present in the baking powder usually in the form of Cream of Tartar: it just needs to be triggered off by the addition of moisture (water, milk etc).

“Double Acting” baking powder adds another dimension. Not only does it start reacting in the bowl as with baking soda and “single acting” baking powder, but it also reacts a second time when it is cooked. This is achieved by the addition of slower reacting acids to the single acting baking powder, which hardly react at room temperature. These only become active once they achieve higher temperatures. So it has a double action - once when subjected to moisture in the bowl and once when subjected to heat in the oven. This quality means that the rush to mix and get it into the oven is avoided, which is especially useful if there are many ingredients which need thorough blending.

So… if you want it to rise, but not a whole lot?

So whats the difference between single acting powder and just plain cream of tartar?

Cream of Tartar is just an acid (Tartaric Acid). Single Acting Baking Powder has an acid (cream of tartar) and a base (baking soda - sodium bicarbonate.) You need both an acid and a base in a recipie to get rise. (Unless you have compounds that create air when heated, such as the sodium aluminum sulfate stuff in Double Acting BP.)
Most modern recipies call for double acting (without mentioning it). So SABP would be useful if you had an older recipie (say, from the 1800’s or so).