Is it just me, or does it seem like Don Bluth was obsessed with people being strangled or crushed to death by tentacles or snake-type-things?

The first arcade game I ever saw or played was Death Race 2000. It wasn’t fancy or all that fun, and the theme might be questioned slightly more these days. Since it was first, can’t call it worst.

Among the classic arcade games I remember a game called Satan’s Hollow that just seemed like a dingy Space Invaders or Galaxian ripoff. I put a few quarters in it, but I never liked it very much.

There were also games like Kangaroo and Pengo that just didn’t appeal to me.

I loved Satan’s Hollow. IIRC there were something like 1000 levels. Naturally, I never beat the game.

1000 levels? How was that possible? Even Pac-Man didn’t have 255 unique levels, it just repeated the hardest one over and over.

It was an endless game, like every other game from the era (and everything released by Bally Midway). It got really hard really fast and the “bridge” mechanic really put a crimp on the players’ ability to avoid getting blasted, which is probably why this isn’t remembered too fondly. Still, in hindsight I find it interesting that a 1981 arcade game could have the word “Satan” in the title and have actual devils with zero outcry (as opposed to the NES era, when a damn cross was taboo for some companies).

Sinistar is a great concept, but it’s damned near impossible to play. 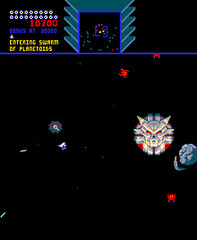