If any one of trump’s kids was involved in a scandal, you know what they’d say “Well, that’s not the Prez, it’s a adult child. Nothing to do with trump.”

If it weren’t for double standards, Trump-fans would have no standards at all.
.
.
.

What would happen if, rather than conceding, Trump goes full-on paranoid and the 25th Amendment is invoked? .

It doesn’t matter how full-on paranoid Trump goes. Mitch McConnell and the Cabinet are all-in on Trump, it would seem.

I’m one of those who hoped for months that the major donors would cry ‘enough’ to Mitch, and he’d then get the ball rolling on the 25th, issuing instructions to the Cabinet, as he is able to do because of his level of power. But this late, this close to November 3, I don’t see it happening. The GOP won’t want the chaos that would cause.

So Donald can come out with his underpants on his head tonight, and no Republican will utter a word about the 25th.

Mitch McConnell and the Cabinet are all-in on Trump, it would seem.

Republican senators, including Moscow Mitch, are starting to notice the writing on the wall.

McConnell warns Democrats are 'on fire' as GOP falls behind on fundraising...

Republican candidates are increasingly worried about President Donald Trump's unpopularity and the drag it might be having on races down the ballot, as Democratic candidates rack up stunning fundraising numbers in the final weeks of the campaign.

Republican senators, including Moscow Mitch, are starting to notice the writing on the wall.

However, I’d be shocked if they made any attempt to remove him–even through bribery, by urging him to “retire due to family health issues” or such–before November 3. It would create an uproar; if they thought such an uproar would help win Senate and House seats, they might go for it. But that seems unlikely.

So Donald can come out with his underpants on his head tonight, and no Republican will utter a word about the 25th.

[Album] State of the Union 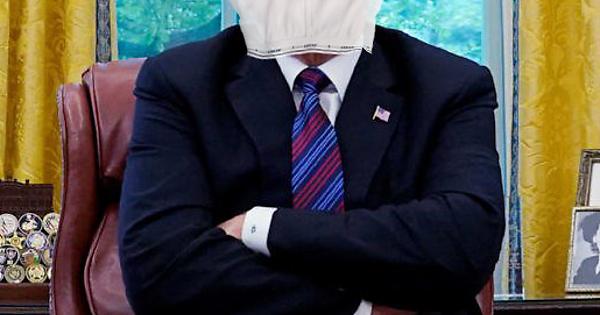 Too little too late, but some folks are at least admitting they are smelling the coffee now:

Republican Sen. Ben Sasse criticized President Donald Trump earlier this week during a phone call with constituents, saying a number of unflattering things about the President, including that he's "flirted with White supremacists" and "kisses...

Too little too late, but some folks are at least admitting they are smelling the coffee now:

Ben Sasse doesn’t have the courage to say any such thing on-camera. He wants to play it both ways.

A pox on these cowardly collaborators.

The Hunter Biden story was completely ignored by Trump at his town hall tonight. Not a single mention. And after all that work by Rudes!

The Hunter Biden story was completely ignored by Trump at his town hall tonight. Not a single mention. And after all that work by Rudes!

What, Trump’s town hall is over already? It’s only 18:40 (PDT) here. What time did it start? How long did it run? Did Trump run out of steam and keel over in mid-sentence?

Nope, he got through the hour. Problem is the Biden townhall went two hours and DJT only went for an hour. Most of it arguing with the moderator. And being clearly annoyed with some of the questions the plebes had the nerve to ask.

and the counter-factual stuff

OK, so if he votes not to confirm Amy, then i will say he has some spine and ethics.

the counter-factual stuff like ‘Trump is protecting pre-existing conditions’ just makes me roll my eyes.

You meant “LIES,” right? It’s too late in the game for euphemisms.

You meant “LIES,” right? It’s too late in the game for euphemisms.

I mean that they’re the direct opposite of the truth - there are usually lies in political campaigns, but they’re also ‘true, from a certain point of view’ or vague enough to warrant an eye roll but not much more. “Trump is protecting pre-existing conditions” is the direct opposite of what he’s actually doing, it’s not a vague statement like “Trump is improving healthcare for all”.

Trump had “shrugged his shoulders” at O’Brien’s warning, the former official said, and dismissed concern about his lawyer’s activities by saying, “That’s Rudy.”

The president made the remark during an interview with “Fox & Friends,” after days of caustic criticism of Biden, the moderators of the presidential debates, the news media and, increasingly, Barr. He recently said the attorney general would go down in history “as a very sad, sad situation” if he did not indict Democrats like Biden and former President Barack Obama.

“We’ve got to get the attorney general to act,” Trump said Tuesday when asked whether he wants to see investigations into unverified information about Biden and his son Hunter that the president’s personal lawyer, Rudy Giuliani, claims he recently obtained. …

Trump called on Barr to appoint a special prosecutor or similar official, saying: “He’s got to act. And he’s got to act fast.”

“This is major corruption, and this has to be known about before the election. And, by the way, we’re doing very well. We’re going to win the election.”


Voters across Brevard County Tuesday afternoon received threatening emails purporting to come from the Proud Boys, a far-right group that espouses militant authoritarian ideology, telling them to vote for President Trump, or else.

The emails appear to follow a similar format, and come from the email address “info@officialproudboys.com.”

“Hi (name) We are in possession of all your information You are currently registered as a Democrat and we know this because we have gained access into the entire voting infrastructure. You will vote for Trump on Election Day or we will come after you. Change your party affiliation to Republican to let us know you received our message and will comply. We will know which candidate you voted for. I would take this seriously if I were you. (Voter’s address),” it read.

The "October Surprise " will happen just before Halloween and will be the horror-show of Drumpf, heavily over-medicated on his lethal combo of Adderall & Steroids & infant-stem-cell derived COVID treatments, exposing his stubby mushroom on national television during a presser exclaiming “I’m bigger than alla you!!!” before being forcibly subdued and dragged away from the podium by Secret Service agents. Keighleigh McIneighneigghhh goes on Fox the next day to complain about “leftist members of the secret service who didnt allow our president to express his magnificent manhood,” and the next day a brigade of Proud Boys & 3%ers all march with their dinkuses out and all the closeted child-molesters in QAnon all expose their well-grabbed schvankmeisters in public solidarity.
Wait for it. It’s coming.

But who has to wipe it up?

It’s pretty sad that this doesn’t have the nation up in arms. Trump has so flooded the public arena with bullshit that this hardly gets mentioned.

After watching Trump over the last few days and hearing about his hissy fit concerning the 60 minutes interview with Leslie Stahl, it seems that Trump’s October surprise will be a spot on, perfect Kanye West impersonation.

It doesn’t seem to matter that West was unable to be on the ballot in all those states, his message and personality seem to be well represented by the Republican candidate in this election.

I gotta say, I think I’m going to watch 60 Minutes this Sunday for the time in 30 years, and I thank Donald Trump for drawing my attention (and millions of others) to his performance well in advance.