When wasn't this guy well-known?

I personally don’t think ancho was used (see my earlier comment) but ancho is only a step above paprika in that percentage. Paprika missing from that recipe, though, also raises my eyebrows, as that’s an ingredient I would fully expect (and is seen in generous quantities in the notebook recipe.)

ETA2: And this is the Chicago Tribune one (lots of white pepper there, too.)

This appears to be the list I saw. The other one appears outrageous – vanilla? ancho peppers?

As Poundstone says, there’s precedent for the corporates changing the recipe. Sanders himself claimed his original recipe for the gravy was wonderful – “so good you could throw out the chicken and eat the gravy”. The gravy that the Heublein people came up with instead he compared to “wallpaper paste”

When I put the question to Google, the top result said:

Other hits give up to 2,000. Still not Jalapeños but not negligible.

But I’d like to hear from people who were eating KFC back in the 1970s.

He and I were talking on the phone about it one day, and he mentioned them going back to the Colonel’s old formula. I quipped, “Let me guess, it’s hand-written on a yellowed piece of paper, in a safe, in the Colonel’s old office.” My old boss was quiet for a moment, then replied, “You don’t know how close that is to the truth.”

Just to push this thread even further off topic, how does a company even keep something like this a secret? Kentucky Fried Chicken must have mixed up thousands of tons of this “secret recipe” over the decades. I’m sure the Colonel didn’t go into his office every January 1st, take the hallowed slip of paper out of his safe, and personally mix up enough herbs and spices to last the whole year. They say that two people can keep a secret if one of them is dead; well, thousands of people must have had access to the KFC recipe over the years. Somebody in the accounting department must have seen invoices for railcars full of ancho chili powder or paprika. How has nobody blabbed over the years, especially if they’re not even using the original “original recipe” anymore?

I have the same question about Coca Cola. How do you make millions of gallons of something and no one knows what’s in it?

I have the same question about Coca Cola. How do you make millions of gallons of something and no one knows what’s in it?

Coca-Cola’s official line is that only two people, at any one time, know the complete formula. From Wikipedia:

According to the company, only two employees are privy to the complete formula at any given time and they are not permitted to travel together. When one dies, the other must choose a successor within the company and impart the secret to that person. The identity of the two employees in possession of the secret is itself a secret.

Honestly, it sounds like a just-so story to me, and an effort to keep the mystique going.

At a quarter teaspoon per cup of flour, it will be undetectable heat wise. Ancho and paprika are the peppers I use for chili my five and seven year old could eat and they are spice sensitive and I use it at far higher levels than that recipe. Even if that were the recipe — which I don’t think it is — I expect everyone to say they did not detect any head, even if we go by your Scoville number (my first hit from The Spice House reports 500.) The black and white peppers would contribute more to the perception of heat.

The identity of the two employees in possession of the secret is itself a secret.

How is that even supposed to work? If, for some reason, they need to get the recipe, they don’t know who to ask. That’s like burying your money in a forest and then burning the map that shows where you buried it. Sure, the money is safe, but if even you can’t find it again what’s the point?

How is that even supposed to work? If, for some reason, they need to get the recipe, they don’t know who to ask.

In theory, I think the idea is, “the identities of the two are secret information, known only to people within the company.” But, yeah, it’s almost undoubtedly just marketing.

From books I’ve read about Coke, they have separate ordering facilities and and several factories making partial components of the syrup, which are then combined at a different plant to make final composite that goes out to bottlers. Or did a few decades ago.

And if you want the formula you can find it in Mark Pendergrast’s 1993 book For God, Country and Coca-Cola. Or at least formulas he found in Coke’s archives and formulas that have been printed elsewhere. He says that the analysis Poundstone did in Big Secrets is very close.

He also reports a conversation with a Coke executive who told him the company didn’t care if he published the formula. What would anybody do with it? They can’t legally make it, can’t legally call it Coke, can’t get anyone to believe them, and their process couldn’t be as refined over a hundred years of expertise. Just because you have a recipe doesn’t mean your result will taste as good. The ingredients won’t originate in the same places, won’t have the same purity, won’t go through the same heating or cooling, etc. etc.

The mystique is more important than this point than the formula. Pepsi undoubtedly knows it. Coke doesn’t care. Given the disaster of making New Coke that taste tests said tasted like Pepsi, they probably would like a competitor to try.

As Poundstone reports, the basic “cola” formula is very well known. It’s in the Merory Flavoring guides, and lots of independent bottlers have made Cola soft drinks for years. One in my home town used yo, until they closed.

(“Cola” drinks are, as Poundstone points out, a “fantasia” blend – a made-up flavor. Coca Cola originally used it to cover up the bitter flavor of the coca leaves and the Kola nut extract. Kola nut extract tastes nothing like a cola soda, That all "cola: drinks taste basically the same is proof enough that everyone stole from or imitated a common source, probably Asa Candler’s reformulation of Pemberton’s original Coca Cola formula)

The basic of “cola” flavoring are a mixture of vanilla (or vanillin), cinnamon (or cassia), and citrus oil from peels (not citrus juice0. Now that I know that, I can’t help noticing it in each drink of cola soda I take. I also observe that flavored meads containing cinnamon and vanilla taste an awful lot like colas.

The differences are in the proportions and the exact other flavorings used. Coca Cola is thought to have more orange peel oil, Pepsi to have more lemon. you’ll notice that a lot of the “added” flavors both companies have come out with in recent years – vanilla, orange, lemon – simply add on what’s probably in there already. There are rumors of lavender oil, exotic flavors like ylang-ylang, and the like. Again, as Poundstone says, anyone with access to a modern analytical laboratory (with mass spectrometers and gas chromatograph) can quickly enough analyze exactly what’s in either Coke or Pepsi.

From books I’ve read about Coke, they have separate ordering facilities and and several factories making partial components of the syrup, which are then combined at a different plant to make final composite that goes out to bottlers. Or did a few decades ago.

I don’t particularly care what’s in the recipes for KFC or Coke; even if I knew what was in them it would be a whole lot simpler to just by it rather than try to make it myself. And I find the whole “only two people in the world know the secret” stuff to be rather hokey.

But I am curious how companies think they can maintain that secrecy while factories are spewing stuff out by the boatload. What you describe above, with different factories all making some component of the final product, sounds like it would work. Some diligent detective work, or a conspiracy of people from different factories, could still put the pieces together.

I don’t know if the French Resistance went to this much trouble to keep a secret.

How many billions was the French Resistence pulling in?

The mystique is more important than this point than the formula. Pepsi undoubtedly knows it. Coke doesn’t care. Given the disaster of making New Coke that taste tests said tasted like Pepsi, they probably would like a competitor to try.

No cite, I’m relying on my memory of 35 years ago, but I had heard that Pepsi, during the short few months that new Coke was the only Coca-Cola available, was going to duplicate the original Coke formula and bottle it under the name of Savannah Cola but canceled it when Coke brought back Coke Classic.

How many billions was the French Resistence pulling in?

KFC introduced their “extra crispy” formula circa 1971, give-or-take a year or two. From that day to this, I have only rarely partaken of their “original recipe”, so I only vaguely remember it. I’ve suspected that the recipe has changed over the years.

I can tell you from personal experience that it takes longer than 7 minutes to cook KFC chicken.

Here’s a training video (14 mins) from 1985. A mild accent (words like process, out, the colour guide) suggests a Canadian origin. Here, the chicken is already coated in The Colonel’s 11 herbs and spices; the video is just for the chicken fry cook. 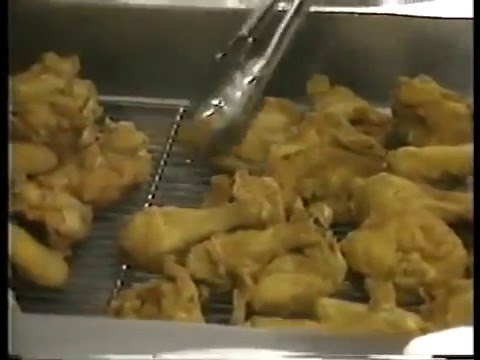 Summary: The chicken is cooked with the fryer open (unpressurized) @375F until the right color is achieved which looks like maybe 2-3 minutes, then pressure cooked for 8 minutes, then racked in a prescribed manner. Interestingly, the legs get an extra 10 seconds of precook. The amount of air released when venting is surprising as well as the hand-held legs.

It’s interesting that the cookers have variable timers and temperatures which can lead to mistakes but time & temp seem to be set in stone from corporate. Maybe they used other settings for other products?

It’s actually a pretty interesting video, even perhaps entertaining. Sure makes me hungry for fried chicken. Aaaand, I’d be remiss if I didn’t link to the South Park scene (1 min) where Cartman does the boys real wrong. South Park - Cartman Eats All the Chicken Skin - YouTube Kenny bursting into tears, lol.

No cite, I’m relying on my memory of 35 years ago, but I had heard that Pepsi, during the short few months that new Coke was the only Coca-Cola available, was going to duplicate the original Coke formula and bottle it under the name of Savannah Cola but canceled it when Coke brought back Coke Classic.

As I recall, John Sculley tells that story in Odyssey: Pepsi to Apple - Wikipedia

Interesting that shortening was used for frying in 1985. I wonder if it was in the early days and/or now.

From Wikipedia: “KFC began to advertise nationwide from 1966, with a US television budget of US$4 million. In order to fund nationwide advertising campaigns, the Kentucky Fried Chicken Advertising Co-op was established, giving franchisees 10 votes and the company three when deciding on budgets and campaigns. In 1968, the budget was increased to US$9 million (around US$60 million in 2013).”

The What’s My Line episode took place several years before KFC began that national TV ad campaign. Which is probably why the contestants had never heard of Colonel Sanders…and why he was on What’s My Line in the first place (for KFC to advertise his image at little to zero cost).