Where does biologically active nitrogen come from

The nitrogen in the atmosphere is N2 which is very difficult to break apart, but nitrogen is abundant in biological life. So where did life get the nitrogen that is suitable for biological activity? Especially considering that life seems to have originally evolved in the oceans near thermal vents and was restricted to the oceans until maybe a few hundred millions years ago.

What you’re looking for are “nitrogen fixers”. A class of oceanic algae are nitrogen fixers, as well as (more recently, geologically speaking) legumes.

The process is called diazotrophy. Beyond that, my memory’s a bit rusty, biochemistry was a set of courses I didn’t pay as much attention to as I should have as an undergrad.

That is a succinct summary. Nitrogen is crucial for life as we know it, forming the basis for nucleotides,
and the specifics of how diazotrophs (nitrogenous bacteria and archaea) evolved is an active area of research in the early development of life on Earth as well as being of interest to astrobiologists. How the process of nitrogen fixing originally developed will probably always be speculative but there are many species of bacteria (including some cyanobacteria, which much later in the evolution of life, evolved to produce free diatomic oxygen) which have the ability to be diazotrophs, often selectively depending on the abundance of fixed nitrogen.

Specifically, symbiotic bacteria in the legumes (and a few other plants, apparently.)

I understand in modern times there is the process of nitrogen fixation, but terrestrial plants have only existed for something like 500 million years, while life itself is about 4 billion years old. Is the nitrogen in the soil in the form of NO2 or NH3 naturally occurring, or did it require biological fixation from N2 to become those forms?

Usable nitrogen has been a necessity for 4 billion years, but a lot of the biological processes of nitrogen fixation seem much newer than that. Even cyanobacteria are about 2 billion years old, and I’m not sure how long they’ve been able to convert N2 into usable forms.

I’m reading parts of a paper now, it claims that lightning or naturally occurring processes that used transition metals as catalysts to break apart N2.

Plants don’t fix nitrogen; even legumes and other plans known for being good at producing nitrogenous compounds, it is actually bacteria living in the plants that fixes nitrogen and delivers it into the rhizosphere (the substrate which plant roots feed nutrients from). Nitrogen is absolutely key to the formation of any nucleic acid-based life, so nitrogen had to be readily available in very accessible forms for life to have formed.

Although there is no direct evidence going back far enough to know what the primal, pre-biotic atmosphere of Earth was, it is speculated to be a reducing atmosphere that would be thick with ammonia and other nitrogenous compounds, and the oceans were a thick chemical soup of carbon and nitrogen compounds rather than the fairly clear saline water they are today. Where the nitrogen came from is actually something of an open question; earlier theories of planetary formation held that nitrogen must have come from bombardment of the Earth by nitrogen-rich comments from the outer solar system due to disruptions during planetary migrations but more recent research indicates that at least some of it formed with the planet.

The production of ammonia and other bioavailable nitrogenous compounds by atmospheric electrical activity today is almost negligible but the early reducing atmosphere of the Earth may have been very different; the very hot atmosphere rich with nitrogen and carbon compounds could likely have produced and recycled nitrogen compounds quickly. Today, the atmosphere is so cool that virtually all of the nitrogen forms its characteristic diatomic form that is virtually inert and requires considerable energy to break apart or form compounds with oxygen or hydrogen.

Is the nitrogen in the soil in the form of NO2 or NH3 naturally occurring, or did it require biological fixation from N2 to become those forms?

The quantity from lightning, discussed later, is over an order of magnitude smaller than any of the estimates of BNF

Estimates of the overall global source strength vary from 2 to 10 Tg N yr−1, with the more recent values closer to 5 Tg N annually. For this review a value of 5 Tg N yr−1 has been adopted.

The global nitrogen cycle in the twenty-first century

Global nitrogen fixation contributes 413 Tg of reactive nitrogen (N[r] ) to terrestrial and marine ecosystems annually of which anthropogenic activities are responsible for half, 210 Tg N. The majority of the transformations of anthropogenic N[r] ...

Could there be a need for more sciences dedicated to nitrogen fixation purely for the reason of increasing biomass and capturing carbon?

there was a study recently that showed that planting a trillion trees will cancel out about 20 years worth of carbon emissions (until the trees die or burn), I don’t think they mentioned nitrogen being a bottleneck in the process.

Could there be a need for more sciences dedicated to nitrogen fixation purely for the reason of increasing biomass and capturing carbon?

Didn’t the reasons against that just get pointed out in your other thread? 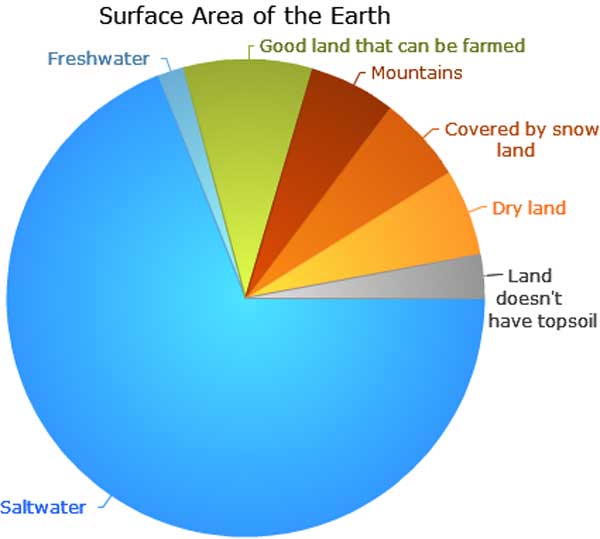 The surface area of the Earth is about 510 million square km (5.1 x 10 8 km2) or 196,900,000 square miles. About 71% of our planet is covered by water and 29% by land and according to the graph above between half and one third of the land area can be planted. Let’s be generous and say half, then we have ~75 million square km (7.5 x 10 7 km2), which converted to square meters is 7.5 x 10 13 m2. A trillion is 1012, so as per simple division we need one additional tree per 75 m2 for every twenty years we have been emitting too much and then some for the future years we will still be emitting too much? We are doomed. As was mentioned in the thread thorny_locust kindly linked to, so I don’t have to search it.

It showed reasons why nitrogen has to be controlled and use sparingly the nitrogen does speed up growth there’s no question about that. And there’s different types of nitrogen

And other reasons why attempting to deal with excess atmospheric CO2 by piling on more nitrogen would be likely to be a bad idea. I’m not going to rehash that whole thread here. People can go read it.

@HoneyBadgerDC - Around 2 decades back, I used to work on water sampling in the Everglades in Florida. Sugarcane (primarily needs a lot of water and nitrogen fertilizer) was grown a lot near the everglades and had heavy runoffs into the everglades.

Nitrogen fertilizers wreak havoc on wetlands and water bodies. They result in growing algae and weed - and thereby oxygen goes down which results in fishes etc. dying.

If you have ever setup an aquarium, you’ll quickly find that removing nitrogen (ammonia and nitrates) is most necessary for the aquarium’s health.

Bottomline : Pumping Nitrogen fertilizers (which btw is easy/cheap to make) has an overall effect on the ecosystem, which needs careful consideration.

Okay we have established at pumping nitrogen could create ecological havoc. But we also lnow the nitrogen you needed to grow plants faster and plan to the primary collector of carbon. It looks like most of the problems with nitrogen have been because there was too much. Using plants that will fix nitrogen in the soil for support the bacteria that fixes it I should say doesn’t seem to be near as damaging as the synthetically produced nitrates. It doesn’t take a lot of nitrogen when water is available to start collecting carbon. So maybe the answer is just using it more responsibly and heavily restrict some types of nitrogen sources and sensitive areas.

Well, yeah. But then you’re not going to soak up lots more CO2 than is already being soaked up by plant life.

We’re really going to have to get out of this mess (if we do get out of it) by other techniques, including reducing use.

Well then there is politics and lobbies.

And TADA : We have green corn ETHANOL. And 10% of your gasoline at the pump is green corn ethanol.