Where have all of the cruise ships gone to if they are no longer making cruises?

I wonder if they still have ghost crews on board in some strange land, plus I feel sorry for all of the people that made money off of the cruise industry.

Parked here and there, most of them in a state of “warm layup,” in which they have skeleton crews keeping the systems running so that they can be returned to duty relatively quickly. 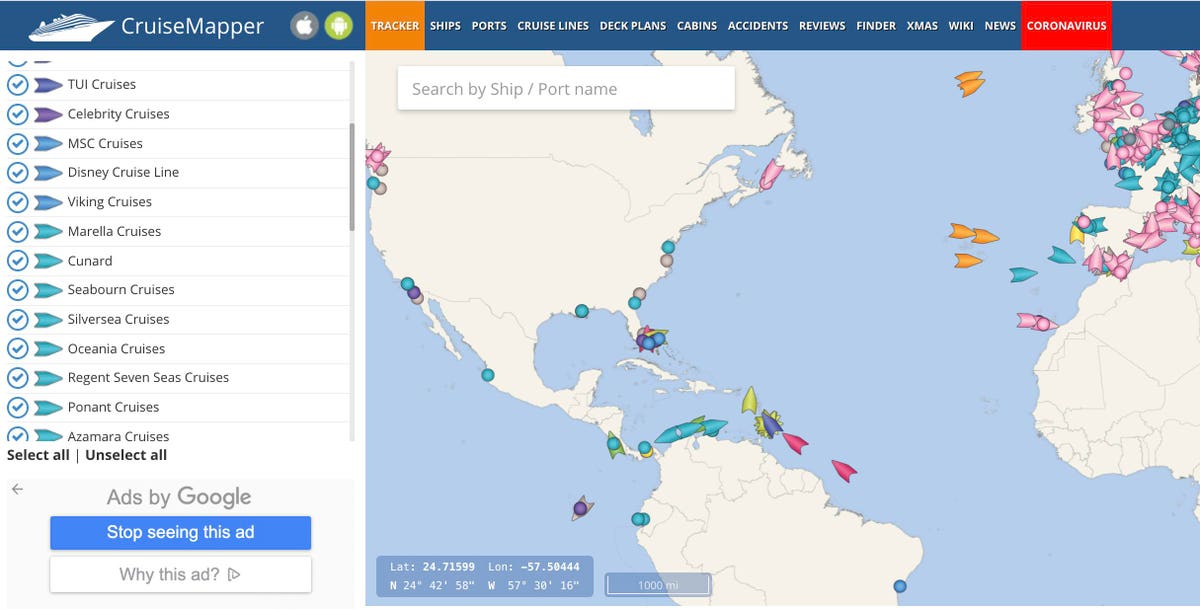 Where Are All The Cruise Ships?

While we see the images of parked airliners lined up on taxiways and wing-to-wing at various airports around the world, where are all the cruise ships?

There is one parked in my little coastal town of Astoria Oregon.

I think the crew ran out of spending money a long time ago, and now what little crew remains is just stuck there.

plus I feel sorry for all of the people that made money off of the cruise industry.

The “ people that made money off of the cruise industry” are primarily executives who cut corners on operating safety and registered ships and their companies as foreign “flag of convenience” to avoid both paying taxes and adhering to US labor regulations, as well as dumping trash, exploiting tourist businesses in the their ports of call, and mistreating or refusing to pay full wages to crew members. If this pandemic severely curtails the megaship ocean cruise industry, it will be a positive outcome.

Where have all of the cruise ships gone to if they are no longer making cruises?

They’ve all gone to a happy little sea upstate where they can cruise around forever.

The “ people that made money off of the cruise industry”

Ok, I feel sorry for the people who work in the cruise industry to buy food to eat.

When will they ever learn?

Many cruise lines have accelerated their ship retirement plans, selling off the older, smaller, less efficient ships either to other cruise lines or the scrappers. It will be interesting to see if they can fill the larger (7000+ passenger) boats in the post COVID world with some increased restrictions.

When will they ever learn? -

Where have all the cruise ships gone…?

We see bunches of them parked or floating around here near South Florida. Often just out of sight of land.

Though some are operating again.

Well, for the short term at least, they’re still sailing in port as others have posted. The latest: Almost every cruise line has a phased in ship relaunch plan for this summer. Updated June 15.

Indicates that most operators are delaying until at least the end of May. I was originally thinking that after waves of ship borne illness and then COVID, that they might slowly waste away, but after reading about the throngs in Florida to celebrate spring break… well, it seems that people are dying (perhaps literally in the future) to throw all this behind them to travel and have fun.

So I suspect there will be a big boom and that the operators are going to try to make sure that they comply with the letter at least of the new regulations, and hope that the passengers will be vaccinated. After all, a cruise ship is pretty much the definition of a high-risk environment. Thankfully (for the owners, not the customers) they are largely owned/flagged in more permissive jurisdictions, so their vulnerability to lawsuits in the event of a large scale outbreak is limited.

There’s no cruising from US ports until November under the CDC order. It’s not clear if that order will be extended.

I can’t find a cruise to Hawaii till Dec/Jan and then it is from Vancouver not SF or Long Beach or San Pedro and San Diego has been removed period.

One good plus is that you can now book a one way trip to Hawaii or a round trip. Good for those that don’t fly due to you can then book a trip back to the mainland going one way too.

Many are laid up off the coast of the Philippines. They had largely Filipino crews and getting the crews home via other countries at the height of Covid proved almost impossible. So taking the whole vessel to the Philippines was a solution.

Additionally, the Philippines has the largest workforce of relatively cheap but excellent seafarers in the world. Cruise vessels need a relatively large crew even when on “warm” lay up, so laying them up in the Philippines made sense.

Many are laid up off the coast of the Philippines. They had largely Filipino crews and getting the crews home via other countries at the height of Covid proved almost impossible. So taking the whole vessel to the Philippines was a solution.

This is no longer true as the crew were allowed to go home months ago. Where the ships went, I cannot say, but they are no longer in Manila Bay.

Some crew recently were called back to service in anticipation of the cruise industry starting back up, but then repatriated (again!) when it became clear that no one was going to go cruising any time soon. They got flown back to Manila this time.

Weymouth is a small seaside town in a sheltered bay on the South Coast of England. There are at least 10 there
Cruise ships at Weymouth

Many others are parked along the coast and it seems that the locals are cashing in doing tours - good luck to them.
More ships