Which brace position is safest on commercial jets?

I’ve been listening to an audiobook on the crash of Flight 232 in Sioux City, IA in 1989. You may remember this crash: the plane lost an engine and all hydraulics. The crash was horrific, and 112 people died, but the flight deck crew, headed by Al Haynes, did an heroic job of steering the plane with brute force, and the fact so many survived (184) is due to them. The movie Fearless is based in part on the actions of Jerry Schemmel, a passenger who escaped from the plane but reentered the burning wreckage to save a baby.

In the book, a flight attendant says she doesn’t like the brace position commonly used today, wherein a passenger crosses her wrists on the seat in front of her, grabs the seat back, and rests her head between her arms. (We’ll call this A.) She said people’s heads have broken their hands.

The alternate position, B, where passengers grab their ankles, makes more sense to me. However, it’s been a long time since I’ve seen B featured in safety instructions. I understand British airlines recommend C, which involves passengers putting their heads between their knees and placing their hands over the backs of their heads.

Which brace position is safest? Is B no longer standard, and if it’s not, is it because seat rows are too close together now? With A, wouldn’t the force of the crash force arms and heads up and generally expose passengers to more flying debris?

Also, I’ve noticed that flight attendants’ jump seats have safety harnesses that cross the torso. Obviously, there are no seat backs to grab, but is the harness safer than a bent-forward brace position? If so, why don’t passenger seats have shoulder harnesses? If not, why aren’t flight attendants wearing a lap belt only and assuming the brace position?

Either position is used depending on your seat.

Why don’t passengers where shoulder harnesses? Same reason we don’t wear helmets in cars, the benefit is not worth the inconvenience and extra weight.

Remember that the seatbelt is mostly used to prevent injuries in turbulence, and a lap belt is just fine for that scenario.

If you have a Sioux City type crash and come away with broken wrists then that is a good outcome!

I’ve always heard (no cite) that the best thing would be to have the seats facing the rear of the plane, but that too many passengers would be freaked out (and I suppose not fly?).

Is the “Flight 232”, by Laurence Gonzales? Great book!

I’ve always heard (no cite) that the best thing would be to have the seats facing the rear of the plane, but that too many passengers would be freaked out (and I suppose not fly?).

Two things that would save a lot of people in survivable crashes is rear-facing seats and fireproof interiors. But it’s cheaper to pay out after a crash than to retrofit every plane, Plus, as you note, freak people out.

The alternate position, B, where passengers grab their ankles, makes more sense to me

Good luck with that position when the seat in front of you is very close and you are over 6’ tall. I believe the key idea is to minimize movement of your body with respect to the interior of the plane, more specifically, the seats. I’d grab the seat back ahead of me, force my forehead into it as best I can, and place my hands to either side of my head (not grabbing the seat, in case it violently twists away, I won’t go with it).

Sort of like, if you are the driver and you know you will impact something from the front and have a second or two to prepare, I am told you should un-grip the steering wheel and place your palms onto the edges, so if the wheel violently twists you don’t break your thumb(s). You can still steer this way but lower the risk of damaging your hands.

Everyone get in crash positions! 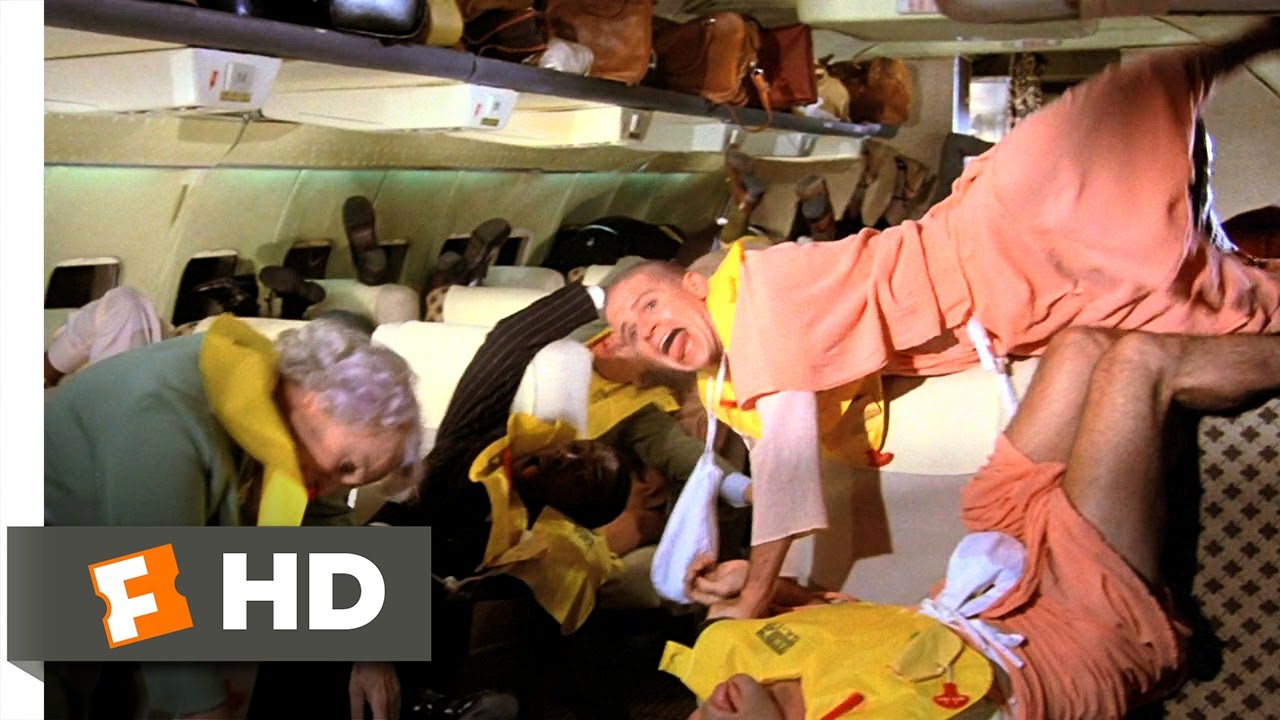 Now, you cut that out!

Is there enough space for B or C in a typical economy class seat, unless you’re a child or very short adult? From what I recall most safety cards show A for economy class and B for first class seats.

Either position is used depending on your seat.

That makes sense, but in older books I’ve read and from my own (fallible, of course) memory, B (grabbing the ankles), was the recommended brace position no matter where you sat. I have to get back on an air

Why don’t passengers where shoulder harnesses? Same reason we don’t wear helmets in cars, the benefit is not worth the inconvenience and extra weight.

After I posted, I started wondering if the reason was that the criss-cross shoulder harness might be too complicated to escape in a hurry. (Which brings up another question: why do plane seat belts use a different release mechanism than car seat belts, i.e., why lift a latch instead of pressing a button?) But I can see how “less weight” and “most likely use” make a certain grim sense.

Is the “Flight 232”, by Laurence Gonzales? Great book!

Yes! And while I’m not done yet, I have to agree.

Good luck with that position when the seat in front of you is very close and you are over 6’ tall.

This is why I asked, “Is it because seat rows are too close together now?” in the OP. I wondered if the switch came about because airlines started cramming in more seat rows, so it became impossible for even average-sized people to grab their ankles. (My head brushes the seat in front of me when I stow a bag under the seat ahead, and I’m only 5’2.) If, as I recall and books have recounted, passengers could and did grab their ankles, seat rows must have been far enough apart to allow it.

In Flight 232, survivors recall their limbs flying upward with the force of the crash. It seems to me the A position would be more dangerous in this regard. And with the B position, you’re not grabbing a part of the plane that may not remain stationary.

I’d always heard that drunk drivers often tend to survive crashes with minimal injury because they are relaxed and just allow themselves to be ragdolled around, whereas people who can foresee the impact will brace themselves, resulting in more severe injuries. Granted, in an airplane you’re dealing with much larger forces, but it seems like the same principle would apply.

After I posted, I started wondering if the reason was that the criss-cross shoulder harness might be too complicated to escape in a hurry. (Which brings up another question: why do plane seat belts use a different release mechanism than car seat belts, i.e., why lift a latch instead of pressing a button?)

I happen to know at least part of the answer to the second question. The red pushbutton on car seat belts is mandated by the NTSB to make it easier for rescue workers to find the buckle and release passengers after an accident. (I learned this because the much more secure six-point harness I used in my track car – similar to the flight attendants’ harness – was not considered street legal because, even though it had a quick-release mechanism, it didn’t have the red button.)

I presume that airliner buckles don’t have this because 1) there won’t be rescue workers going through the cabin releasing people, 2) the buckle needs to be strong, simple, and cheap, and 3) the red plastic button is probably weaker and more prone to break than the basic buckle used in planes.

As for what you call the criss-cross harnesses (in racing they are called four-point harnesses; five- and six-point systems add one or two straps from the buckle to the floor between the legs), although they could be made with a quick-release mechanism like the red button, the biggest drawback would probably be getting people into them in the first place. That process is much more complicated and time consuming than a simple lap belt, and would delay take-offs, costing the airlines money. And yes, in an accident they might also slow down people getting out of them as well.

But as someone mentions above, they would also be overkill, since the main function of the lap belts is to reduce injuries in the much more frequent situation of turbulence. In a serious crash, when the vehicle is going from several hundred mph to zero in a very short time, pretty much all bets are off, regardless of the safety equipment available. And the rarity of big crashes means that all the other drawbacks are not worth the effort or expense.

It is a news story that appears with horrifying regularity: A drunk driver crashes into a sober one, and the sober person dies while the drunk suffers only minor injuries.