Which country (culture, empire, etc.) has the most effective anti-corruption laws?

I’m a huge advocate of enacting laws making corruption (of government officials, primarily, but also of anyone interacting with them–i.e., bribetakers and bribegivers alike) illegal. If this discourages people from public life, good. If it suppresses free speech (bribes = speech??), fine. Corruption in government is unacceptable to me.

But are there countries that effectively ban corruption? Do they do so at a great loss of liberty? Do they accomplish this goal by defining corruption broadly or narrowly? By harsh punishment? Shaming? Fining?

In short, is it too idealistic to want laws in the U.S. that severely discourage corruption, or is that an achievable goal? Who does (or did) it well?

I would start with the Corruption Perceptions Index. The US is at rank 25 so not that low compared to all countries on the list but lower compared to many of the other rich industrial ones.

Most nations have at least paper laws against corruption. I don’t think their efficiency is based on how well or thoroughly the laws are written but on the meta-social factors that lead to corruption being either tolerated or disdained. I’m thinking of countries like Mexico or 1980s Italy, where people were seriously trying to stamp out corruption but at times it seemed like trying to enforce Prohibition in 1925 Chicago.

In short, is it too idealistic to want laws in the U.S. that severely discourage corruption, or is that an achievable goal? Who does (or did) it well?

Corruption or lack thereof is more about culture, not laws. The laws will NOT be effectively enforced UNLESS the culture wants them to be. During Prohibition, the US was as corrupt as many third-world countries are today.

We seem to be saying that corruption is inevitable, and there’s nothing to be done that might curtail it, other than somehow to change our entire culture, which certainly is not happening within the next few generations. Or am I oversimplifying what we’re saying here?

Which cultures are less prone to corruption than the U.S.? And how did they achieve that end?

IMHO it depends what you think is corruption. I personally think all political lobbying and campaign funding by various interrest groups is blatant corruption and it happens even in the most “uncorrupted” countries.

I’m guessing that the countries which keep money out of politics are less prone to corruption. BUT which came first, lack of money in politics or society’s desire to be uncorrupt?

I f we could get money out of politics in the US, it would lead to solution of many problems. High drug costs and gun control are two which leap immediately to mind.

Well, let’s not get ahead of ourselves here. Which countries are those? If we can begin to answer that one, we can then begin to analyze the whys and whens and hows.

Indeed. We may not have to slip a few bills to the local DMV clerk to get our car registration renewed but our much more harmful corruption is at the national level and is all perfectly legal.

It may surprise few that I champion changing the structures of our elections as a tool to minimize the influence of money on political policy but asking the folks who benefit from this system to reform it is a very steep uphill fight. Look how long it took to reform the rules against college athletes having full economic liberties and the opponent there was, in theory, our nation’s finest institutions.

Baked in systems are hard to overturn with a constitution that favors inertia.

It’s impossible to keep money out of politics. Running political campaigns is an expensive business and parties and candidates need to get money from somewhere.

However it is possible to regulate spending, by limits and reporting rules. To speak of the Canadian example, (Canada is tied for 11th place on the corruption index cited earlier) there are limits on donations, and also limits on how much each party can spend. There are also strict reporting rules.

The limits on donations at the federal level are that only individuals can donate, not corporations or unions. There’s no equivalent to PACs. There are also limits on how much each individual can donate; I think it’s about $2,5000 per riding, but you can donate up to that amount in each riding.

There are also the caps on spending by each party, based roughly on how many candidates they’re fielding. In the most recent campaign, this year, the caps on party spending totalled about $100 million for the parties.

Third party advocacy groups are also regulated in how much they can spend, and if they advocate for a particular candidate or party, their expenses count towards the caps on spending. Again, no PACs or SuperPACs.

And, every donation has to be recorded and returns filed with Elections Canada, the non-partisan election regulatory body. The parties also have to filed detailed returns on their spending, to show that they complied with the rules. 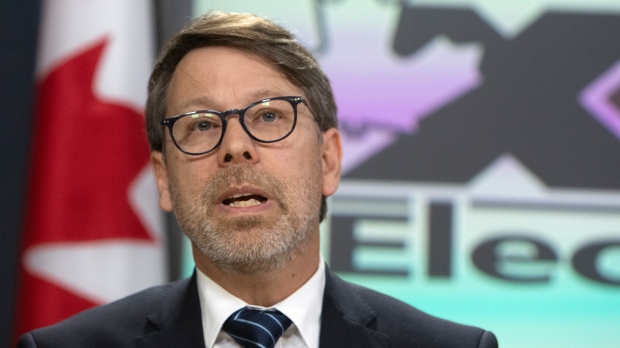 Canada's chief electoral officer has announced the initial ceiling on parties' expenditures in the election campaign now in full swing.

Those limits are enforced. One MP went to jail for a month, four months house arrest, and 18 months probation, coupled with a ban on standing for election for over five years. His offence? An unreported personal payment of $21,000, which he paid for out of his own personal funds, but which put him over his spending limits.

Canada is smaller than the US, of course, but my rule of thumb when I’m trying to compare numbers is to multiply the Canadian numbers by 10, since the US population is about 10 times the Canadian population. That multiplication normally works.

But not for election spending. Multiply the $100 million for the 2021 Canadian election by 10 gives you $1 billion.

According to Open Secrets, the total spent on presidential and congressional races in 2020 was about $14 billion.

The total cost of the 2020 election will nearly reach an unprecedented $14 billion, making it the most expensive election in history by far.

Looking at the Corruption Perceptions Index, another point that jumps out at me is that of the countries in the top ten as cleanest, all but one are parliamentary democracies. (The exception is Switzerland, which is a representative democracy with a heavy dose of public referenda.)

It’s a lot harder to bribe politicians effectively in a parliamentary system, because individual MPs don’t have as much influence as congress-type representatives. Party policy is set by a combination of the party, the party caucus, and the party leaders. Because it’s a system of collective leadership, bribing individuals doesn’t work.

NP is doing good work here fleshing out how the structures of government and elections can affect the corrupting influence of money.

There are certainly principles of representation and governance that make our system appealing on paper but we pay a huge hidden price for them.

And how did they achieve that end?

In Canada, the current rules have evolved over time, steadily moving to impose more limits on spending and contributions, and greater transparency.

The big change was at the end of Prime Minister Chrétien’s term in office, when he pushed through the prohibition on donations by corporations and unions. Since the Liberal Party traditionally received big donations from businesses, and the Conservatives were more a grass-root funded party, it seemed a counter-intuitive approach, but he was apparently concerned about the long-term impact of businesses being able to influence government (he was on the left wing of the Liberals, so in that sense, not a surprise).

There were predictions that the change would hit the Liberals hard, and indeed, they didn’t do well in their fund-raising for a while, but they had to adapt to a system of individual donations, and have done so, being in power now since 2015.

Singapore and Switzerland both spring to mind immediately.

Regarding the thread topic question, it depends on what kind of effect you want. China’s draconian anti-corruption laws seem to have reduced bribery to officials. And they have clearly reduced conspicuous consumption by officials. But ever-sterner punishments do not build the social trust characteristic of the countries at the top of the transparency index (currently Denmark and New Zealand).

Some research led me to the realization that spending limits may be at least as important as contribution limits.

“As you look over the different regulations various countries have come up with, it does seem that the thing that makes all the difference in how campaigns are conducted is the spending limits, which are often combined with time limits on electioneering. Everyone has to weigh two competing considerations. The first is the desire for elections that retain a reasonable amount of integrity, and are conducted in a manner that is, for lack of a better term, civilized. And the second is the principle of free speech, that a candidate for office should be able to say what he wants, as often as he wants, and spend as much as he wants doing it, even at the risk of corruption. In most other countries, they’ve decided that the first consideration is more important. In the U.S., we’ve decided that the second consideration is the only one that matters.”

A quibble: In the US candidates are allowed (after they leave office) to keep campaign contributions which went unspent. Given this situation, spending limits lose some of their effectiveness.

In the U.S., we’ve decided that the second consideration is the only one that matters.”

This would be a fine starting point for combatting corruption. As a principle, “anything goes–FREEDOM!!!” ruins the entire discussion, and that seems to be the winning argument in the U.S., whether the subject is an armed populace, an endless election cycle, a blabbermouth President who violates election-fraud laws on tape, etc. “I MUST BE FREE TO DO WHATEVER I LIKE DOING” seems to rule here–in most other countries that kind of talk will get you committed to a mental institution but seems to be taken as almost holy in the United States.

So is the main obstacle to combatting corruption the reverent status of free speech? Certainly, money is essential to corruption, and the equation of political contributions to free speech opens the floodgates.

One thing the US has more of compared to other rich (and democratic) nations is higher inequality. When inequality is very high combined with a (virtually) non-existent social safety net, like in many poorer countries, individuals are much more likely to be corrupt since maintaining your current wealth and status is much more important, comparatively speaking, so ‘cutting corners’ is seen as a lot more justified.

One thing that seems to be quite effective is whistleblower protections; lowering the risk of reporting corruption, even to the extent that you can be a co-conspirator and still immune to prosecution. Because, after a while, it means no-one can trust their cronies, which makes corruption seem much more risky.

On paper the US has whistleblower laws, but most recent tests of, for example Dodd-Frank, have shown the protections for whistleblowers to be quite weak.