but every doc/nurse/etc seeing patients in person should get it as priority 1a.

The good news is that yesterday we finally opened a website to schedule appointments for the vaccine. ETA: The bad news is that the schedule filled up within hours of it opening. Double ETA: not hours, 15 minutes.

I agree that it’s a little weird that you only got it this late. A lot of other clinicians are getting the second dose now.

Rollout has been slow in my state. Lots of red tape, lots of scrambling to fulfill the state DHS requirements, lots of delays, etc. I spoke at length to the guy with the responsibility for setting vaccinations for 9000 employees and 23K inmates around the state, at 39 sites, and he said the paperwork burden has been unbelievable, specific plans with specific personnel designated and certified as trained at each site before we even get the vaccine. Then we get the one that needs to be kept at like -90 degrees, so special freezers are needed. And we only get 100 doses, to ‘trial’ our setup at one site. I’m grateful to have gotten in on day 1.

I just read an article about Connecticut’s vaccine rollout, which said that prison staff were in group 1b. But as prison medical staff, I think you should have been in 1a.

Thelma, everyone i know who has gone to county health departments up here in DFW has had a smooth, non-crowded experience. They aren’t over scheduling and there aren’t long waits or crowds.

I have an appointment tomorrow. They are starting to roll into 1B and my district is working with the local public hospital. I can’t believe it. I will be nervous until it’s done.

Still a slow rollout in Oregon. Few doses, no info, talk about going to the next group when very few people in the first group have received it and still can’t find out where we’re supposed to sign up.

My mother is signed up for her first Moderna shot Friday due to her age.

I checked on the state website and officially confirmed what I had figured; I am not in any of the currently scheduled groups.

Thelma, everyone i know who has gone to county health departments up here in DFW has had a smooth, non-crowded experience. They aren’t over scheduling and there aren’t long waits or crowds.

That’s not the case in San Antonio at all. Quite the opposite. There are about a dozen places online where you can go to get an appointment, but all of them are currently without any vaccines. There was a city wide signup online and all the appointments filled up in nine minutes. Even so, people without appointments showed up at the location and were turned away. The process is not under control yet, but I have great faith in the mayor. I’m not worried.

Here, the forms seem to put you on a huge list and you get called. I am sure you guys will be rolling soon

Here, the forms seem to put you on a huge list and you get called.

Where is “here” (what state or country)? Do you know anyone who has actually been called? Last night I had a zoom get together with our choir that’s on hiatus. Several people said they were “on a list and would get called.” I kind of doubt it… Others had gotten vaccinated because they stumbled on one of the sites at a moment when appts happened to be available. One person has a friend who’s a pharmacist, and the shop had some extra vaccine, so her friend called and said to bring her husband and get over there immediately. Not sure what she’s going to do about the second shot. It’s a crap shoot.

This describes what I’m talking about. Not news to anyone. 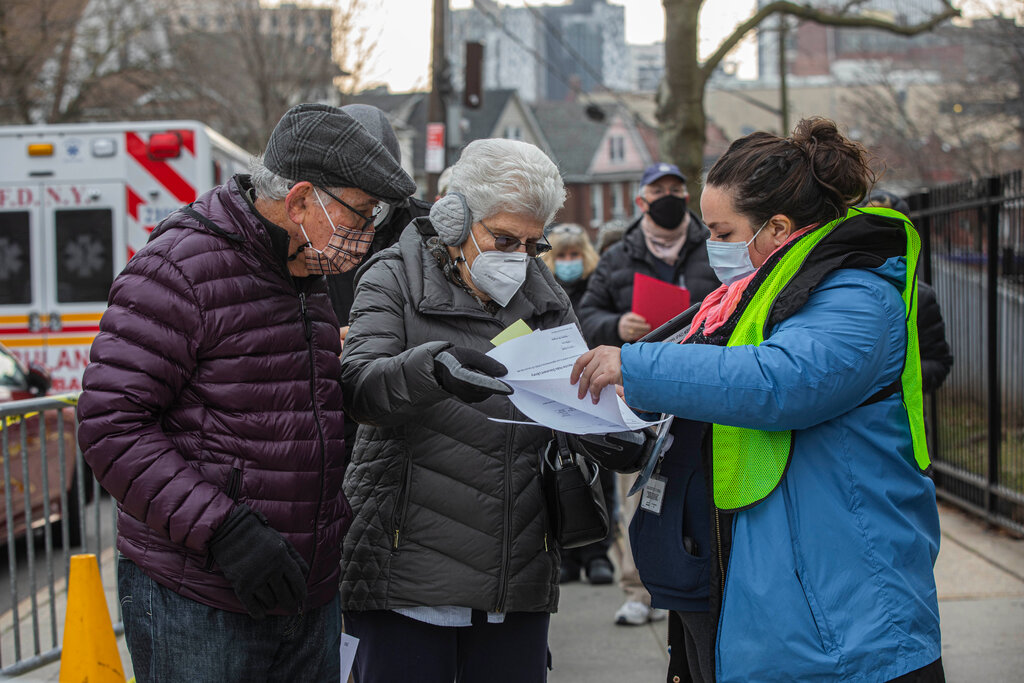 A million city residents who are over 65 are now eligible to be vaccinated. But try making an appointment.

…
Computer-literate, she [Laura Engle, NYC resident] navigated New York City’s vaccine finder page on Monday, found the closest provider and sent an email with her name and number to set up an appointment. When no one called, she reached out to the urgent care’s corporate office, which told her to wait.

She wanted to register at the new Javits Convention Center megasite, which she heard about on the news, but could not figure out how.

“I’m willing to wait my turn,” she said, frustrated, “but I would like to have some feeling that I have a turn.”

In the city, over a million older New Yorkers started the week with optimism that they would finally gain access to the vaccine after months of fearing they would fall victim to the coronavirus. But the reality of actually getting the shots has proved to be far more maddening.

Buggy websites, multiple sign-up systems that act in parallel but do not link together and a lack of outreach are causing exasperation and exhaustion among older New Yorkers and others trying to set up vaccination appointments.
…

I don’t blame the local governments. Trump just threw the issue back to the states, counties, cities-- kind of like when he threw the paper towels into that crowd in Puerto Rico. Every person for themselves.

I absolutely feel the situation will improve-- it can hardly get worse. I’m seriously not worried.

She said above but abbreviated: DFW/Dallas Fort Worth

Thx. I missed that.

Where is “here” (what state or country)? Do you know anyone who has actually been called?

I know multiple people from 1B that were called from Tarrant County (Ft Worth). The two who have already had their appointments said it went really smoothly. In and out in an hour.

Dallas County is calling people over 75 first, and that system doesn’t seem to be working as smoothly. But they started several days after Tarrant County.

I got on the Parkland (Dallas County Public Hospital) list through the school district: they had a form for those of us in 1B. I filled it out Monday, and last night got instructions on how to make an appointment on line. I did and have one in a few hours, and the second one scheduled.

I think the big hubs are figuring it out.

Also, I know you live in San Antonio/Bexar; our county judges talk. So I imagine your procedures will be similar. That was the context of my remarks.

See note about knowing you were in San Antonio. By “big hubs” , I mean the distribution centers within the urban areas. The county judges are figuring out how to coordinate these things (because no one else is helping!)

Sorry. I’m reading so many threads that I can’t remember what I read. I have great faith in our county judge and our mayor.

And done. I did have to wait an hour in line, so that was less good than I hoped, but still. All vaxxed up.

I gave up after over an hour and a 1/2 on hold today. It seems like the urban areas are setting up massive clinics that looked to me like super-spreader events, but even so they don’t have any vaccine and you can’t get in. I will probably be waiting a few weeks until distribution gets sorted out. Fortunately I can do both of my jobs from home.

I did have to wait an hour in line

My county in upstate NY is basically saying, ‘please stop calling us, we don’t have any vaccine here and don’t know when we’re going to.’

How are people waiting in line for vaccinations? I’m guessing not standing for an hour or four. Do they set up seats, six feet apart? Are they having drive-through vaccination clinics? (And if so, do they have you park for 15-30 minutes after in case of complications?)