To my non-baseball-fan mind, MLB seems to be a strangely petty or mentally fragile league, compared to the others.

If a batter wants to flip his bat in celebration, Bautista-style (as long as it doesn’t hit anyone,) or stand there for a few seconds admiring his home run as it flies…why can’t the pitcher just…deal with it? You rarely hear of a defense in the NFL getting mad when an opposing offensive player celebrates a touchdown with a dance - they know it’s on them for allowing the touchdown.

Ditto for all the other unspoken rules…why can’t the aggrieved party just…deal with it? These are grown men being paid millions to do their job, a thick hide should be easy.

You realize the NFL has actual written rules about endzone dances and taunting, right?

In Ye Olden Dayes of Yore, baseball was a sport of gentlemen played for fun. Cheering a good play by the opponents was considered de riguer. The fact teams are still called “clubs” and have “clubhouses” harkens back to that earlier era. Baseball loves its tradition.

We are witnessing the transition of baseball to the courser standards of the other professional sports right before our eyes. And, ref @TriPolar, because all this is unwritten tradition, the process will be noisy & erratic.

As to NFL, I’m old enough to know when any end-zone celebration of any kind was a penalty. Spike the ball: 15 yards. Wave your arms at the end-zone fans: 15 yards. Along the way somebody in the TV office realized the audience liked watching the celebrations. So the rule was changed to allow some celebrating. And changed again repeatedly to where we are today: Ridiculous choreographed dances.

The public wants a trashy spectacle; the leagues are happy to provide one. Once they cotton on.

You realize the NFL has actual written rules about endzone dances and taunting, right?

And MLB has been trying to reduce the time it takes to play each game? Allowing batters to stand around doing nothing but watch will add up.

Allowing batters to stand around doing nothing but watch will add up.

Probably to less than a minute even in the most extreme slugfests.

The unwritten rules are all basically the same thing: Don’t be an asshole.

Those who mock them think being an asshole is perfectly OK.

Unwritten baseball rules basically cater to the pitcher. Look at the weird reaction to Tatis Jr daring to swing at a 3-0 pitch, or rules behind not stealing with a large lead or not bunting in a no-hitter. As far as I can tell, baseball has unwritten rules because pitchers are divas who are allowed to deliberately try to injure players by throwing at them with little or no consequence.

In reply to the above, if the unwritten rules are meant to prevent assholes, then the biggest unwritten rule should be that a pitcher must never, ever, under any circumstances, throw at a batter. And yet that’s considered part of the game.

Probably to less than a minute even in the most extreme slugfests.

Your link doesn’t work, but in my experience there is usually only one home run per at bat.

I assumed that Skywatcher was referring to batters stopping to admire their home runs, which doesn’t take more than a few seconds. Even in a game with lots of home runs that’s not going to add up to much time.

Hmmm - you may be right on that. I thought he was talking about batters stepping out of the box. But with how he was responding to the NFL end zone stuff, your take is probably right.

Lessee if this works: 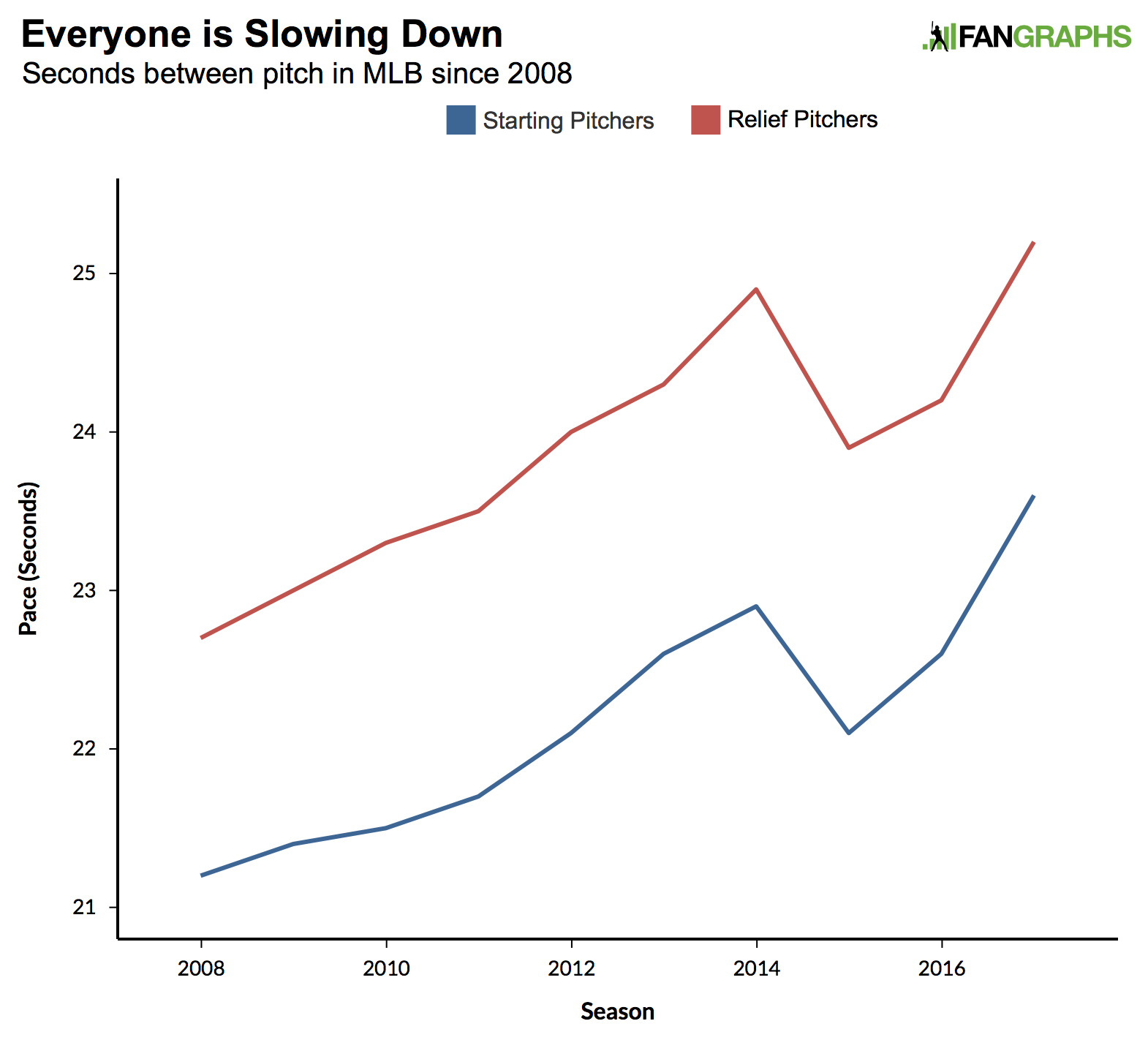 MLB Pace Has Never Been Slower. Who’s to Blame?

Time of game and pace reached record highs in 2017. Are pitchers receiving too much of the blame?

The unwritten rules are all basically the same thing: Don’t be an asshole.

Those who mock them think being an asshole is perfectly OK.

Nah, that’s not really it at all. A home run, especially late in a tight game, and even more especially in a crucial match like a playoff game, is something to be admired, something to be celebrated. A few seconds watching the ball fly, or a flip of the bat, is far less of an asshole move, in my opinion, than yelling at the guy who does those things, or wanting to punch his lights out.

Some of the unwritten rule forbidden plays are also things that the other team should be able to prevent. Like bunting to break up a no-hitter, or bunting with a big lead, or stealing a base late in the game with a big lead. If you don’t like people breaking those unwritten rules, then stay on your toes and prevent them from doing it.

And there are even dumber ones than that, like earlier this year when the Padres were leading the Rangers 10-3, and the awesome Padres shortstop Fernando Tatis was at the plate, where he proceeded to crush a bases-loaded home run. He didn’t flip his bat; he didn’t showboat; he’s just doing his job, right? And yet, according to the Rangers, and a whole bunch of idiotic “unwritten rules” commentators, he should not have swung on a 3-0 pitch with his team up by so many runs, because it was disrespectful and “running up the score.”

If the “unwritten rules” are so important to everyone, then perhaps the game’s written rules should have them written in. The reactions I see, though, to someone breaking an unwritten rule usually violate the actual written rules.

Ah, who knows? Maybe it’s this childish nonsense on the players’ part that serves to remind us baseball is, after all, just a game.

You aren’t permitted to celebrate in American sports?

In football, hockey or basketball, if you are willing to risk a penalty, there is a way for any player to directly retaliate to a humiliation in the field of play via a physical assault or an aggressive play.

As for just “accepting things” imagine if as a pitcher you throw a 3-2 pitch and give up a grand slam, and the home run hitter throws his bat 50 feet and trots slowly to home base, gives the cross sign, points to the sky, and you look over and the prick is in the dugout yukking it up and high fiving his teammates, all on national TV.

Overall I agree But …

When you think about it, there’s not much a batter can do to punish the other team except for a fortunate big hit.

As a runner or batter-runner there are aggressive slides into the basemen or catcher. Which, yes, has been limited by rule for a few years now when it became too popular as a retaliation play.

Put me down for writing down the unwritten rules. Then debate them, officially adopt the ones that make sense, and pitch the rest onto the ash heap of history.

As to your last post about embarrassing the pitcher …

This faulty mindset flows from the idea that a “good” pitch will always defeat a “good” batter. So therefore any hit represents a per se mistake / poor performance by the pitcher. Nonsense.

By that logic, every time the batter swings and misses, his next move should be to fling his bat at the pitcher, followed by charging the mound. Since after all, he was just made a fool of; waving his bat wildly at nuthin’ but air! What a loooozer!!

The nature of baseball is that for most of the playing time, one person has the total focus of the audience & TV cameras. It’s the pitcher from receiving the ball to release. Then it’s the batter until he connects or doesn’t. etc. Like being a stand-up comic; it’s lonely being the one guy on stage that everybody is looking at. But it’s an error to think the pitcher is the only role being the sole focus.

For sure, as individuals, a pitcher is the focus for more of a game than is e.g. a 2nd baseman. No kidding Sherlock. Kinda like quarterbacks or goalies. If you want the prima donna position, it comes with lots more opportunity to both be heroic and to be a goat. Wanting one while demanding to be shielded from the other is a pretty wimpy desire worthy of nothing but scorn.

As much as I’d love to be able to throw heat like that, I’m not a psychopath. Throwing at someone (especially their fucking head) is far more childish than the most blatant bat flip imaginable.

As for just “accepting things” imagine if as a pitcher you throw a 3-2 pitch and give up a grand slam, and the home run hitter throws his bat 50 feet and trots slowly to home base, gives the cross sign, points to the sky, and you look over and the prick is in the dugout yukking it up and high fiving his teammates, all on national TV.

Imagine if, as a hitter, you come to the plate in the bottom of the 8th inning with men on the corners and your team down by two. You know, because you understand baseball, that your chances of even getting on base are well under 50%, that your chances of a hit are probably no better than one in three, and that your chances of hitting a home run are probably a few percent, at best. You leave the first pitch, which is down and away, and it paints the outside corner for a called strike. You swing at the second pitch because it looks like it’s coming over the heart of the plate, but it’s a vicious curveball that you just manage to foul off. 2-0. The third pitch is inside for a ball, and the fourth is in the dirt. The next pitch is 99 mph, but you see it coming down the middle and know it’s a strike, so you give it everything you’ve got. It smacks right into the sweet spot on the bat and takes off; you know that you hit it sweetly, you see it sailing toward the left field stands, and you know that you’ve put your team on top with only three outs left to get.

Tell me you wouldn’t want to flip the bat, or jump up and down, point to the sky, and high-five your teammates when you get to home plate and the dugout.

Baseball is a game where the pitcher is expected to “win” in the vast majority of matchups, and where the hitter is far more likely than not to “fail” in any given appearance at the plate. Given that the very nature of the game weighs so heavily in favor of pitchers, they should be willing to suck it up if the hitter wants to celebrate a crucial home run.