Why did Alchemy last so long when it never did jack?

Which compound would this be?

Which compound would this be? 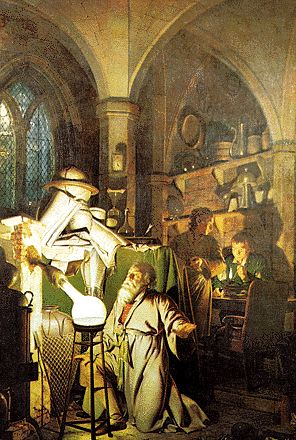 The Discovery of Phosphorus - AlchemyLab.com

Interpretation of this Drawing (by John Read) One of the most famous alchemical paintings of the eighteenth century is “The Discovery of Phosphorus” by the English painter, Joseph Wright (1734-1797), of Derby, England. In essence, Wright continued...

This, on the other hand, isn’t a compound; it’s a form of elemental phosphorus.

I would have figured out that lead doesn’t turn into gold after enough trial and error.

I wish I could remember the exact quote, or even who is supposed to have said it, by my math teacher told us about Someone Famous (at least in the math world) who said something along the lines of “If you fail a hundred times, you haven’t shown that something is impossible. You have merely shown a hundred ways not to do something.”

I wish I could remember the exact quote, or even who is supposed to have said it, by my math teacher told us about Someone Famous (at least in the math world) who said something along the lines of “If you fail a hundred times, you haven’t shown that something is impossible. You have merely shown a hundred ways not to do something.”

Something like this is typically attributed to Edison after 1,000 failed attempts at a working light bulb.

Alchemy probably continued for so long because it seems to me that alchemy would be fun. I mean, you get to wear a pointy hat and a long beard and work in a stone-walled laboratory filled with esoteric beakers and cauldrons and weird devices, like Merlin’s house in the Disney animated movie of Sword in the Stone. Not only that, but the chicks were probably all over you. And you could impress people by disappearing into a puff of smoke and shit like that. I mean, hell, what’s NOT to like about it? If it was still a viable career choice, I would do it without a moment’s hesitation.

Working in hot labs with fires using toxic materials with no personal protection or engineering controls? I don’t think so.

Same reason as astrologers are still around?

I was going to say “homeopathy & natural remedies ring a bell ?”, but that works too :).

Also, bear in mind that the whole “lead into gold” shtick is pretty much propaganda and misrepresentation from later centuries in a “ho ho, how stupid people were back then !” vein, similar to the notion that knights would have to be craned atop their horses, or that people waited until Columbus to figure out the Earth isn’t flat. The myth of the philosopher’s stone, that magical reagent that could turn anything (not just lead) into gold was indeed real, and the dream of many an alchemist including Sir Isaac Newton, but it wasn’t their sole preoccupation either. Most of them took it for the fantasy it is.

What alchemists really were were proto-scientists. And although, say, the whole phlogiston nonsense, or the theory of interraction of four elements were in time discarded in favor of other belief systems, they *were *an attempt to understand what makes things tick without the need for some god or other making it so.

And while it is true alchemists didn’t get results often (thanks to lack of scientific rigor or communication & peer review), and that many of them indeed were snake oil salesmen, when they did get something working, they did it with a bang : see gunpowder.

The hope of getting rich by finding a way to make gold was really only a very minor aspect of what motivated alchemists (no doubt a few were in it just for that, and some were just con men, but that is another matter). Alchemists sought the power to transform things, and especially the power to transform crappy stuff into better stuff: better not in the sense of being worth more money, but purer, nobler, spiritually better. Gold was the best stuff of all, the noblest of metals, because it does not tarnish (and, I should imagine, because it had been associated with kingship, with “noble” people, since prehistoric times), and as such, if you could make gold that would be the proof that you had reached the highest level of alchemical power and wisdom. If you had that power and wisdom it made you like a god, a spiritually superior being, and brought you closer to God or the gods. Alchemy was thus at least as much a sort of religious quest as it was a way to get rich (although I guess it helped that in theory success would make you rich as well as making you a superior being). However, even if you did not make gold, but succeeded in making some pretty crystals, or whatever, that could all be seen as evidence that you were making incremental progress along the hard road to becoming godlike.

Incidentally, there was theoretical justification for the notion that making gold ought to be possible. On the one hand, Plato and Aristotle, the most respected (not to mention intellectually sophisticated) of authorities, both held (on different grounds) that it should be possible in principle to transform virtually any substance, including “elements” (earth, air, fire, water), into virtually any other. There was also a belief amongst miners and metalworkers that metallic ores grew and matured in the ground like plants, that different ores were this “plant” at different stages of its long slow maturation, and that the ultimate, fully mature stage was gold, which unlike other metals is found not as an ore needing to be smelted, but as the metal itself. (In Aristotelian terms, gold was regarded as the “final cause” of all metals and ores, what they were really meant to be. I do not think Aristotle himself ever said anything about this, but it fits readily into his philosophical framework.) Alchemists saw themselves (in some cases, anyway) as merely trying to hasten this agonizingly slow natural process of metallic maturation, by means akin to “forcing” the growth of a plant. Metallurgists already knew how to force the stuff to go from the ore stage to the metal stage. The not entirely unreasonable hope was that an alchemist might be able to use similar sorts of techniques to get from the regular “immature” metal all the way to the ultimate gold.

No to this as well. The process would be as secret as humanly possible. No alchemists thought it would be easy or quick. They spent years at it and even if they found the method they expected it to be difficult and time-consuming.

And even if they DID…if you’re the only one who knows, does it really matter?