Why do stadium organs sound different than regular organs? ARE they different?

This question came to me when I was watching this week’s episode of Monsters at Work, which was a baseball episode. The closing theme had a rendition of the franchise’s iconic “If I Didn’t Have You”, rendered by a stadium organ.

And it was quite clearly evocative of a baseball game.

This got me to thinking. I know that church organs have different settings to make them sound different; I know that much simply from going to church. But are the organs they use in sports stadiums a fundamentally different instrument than the ones used in church? Or are they the same, and they just use, like, a “baseball” or “Madison Square Garden” setting when they’re played?

Depends on the organ, but I believe the main difference is that, unless it’s an older model, most sports arena organs are electric and amplified via the PA system. Church (pipe) organs aren’t amplified; they’re just really loud, and the sound comes directly from blowing air through the pipes.

There’s also the rather significant difference in the space they’re in. Churches are enclosed and echo-y. Stadia are usually open at the top, and always vast open spaces. 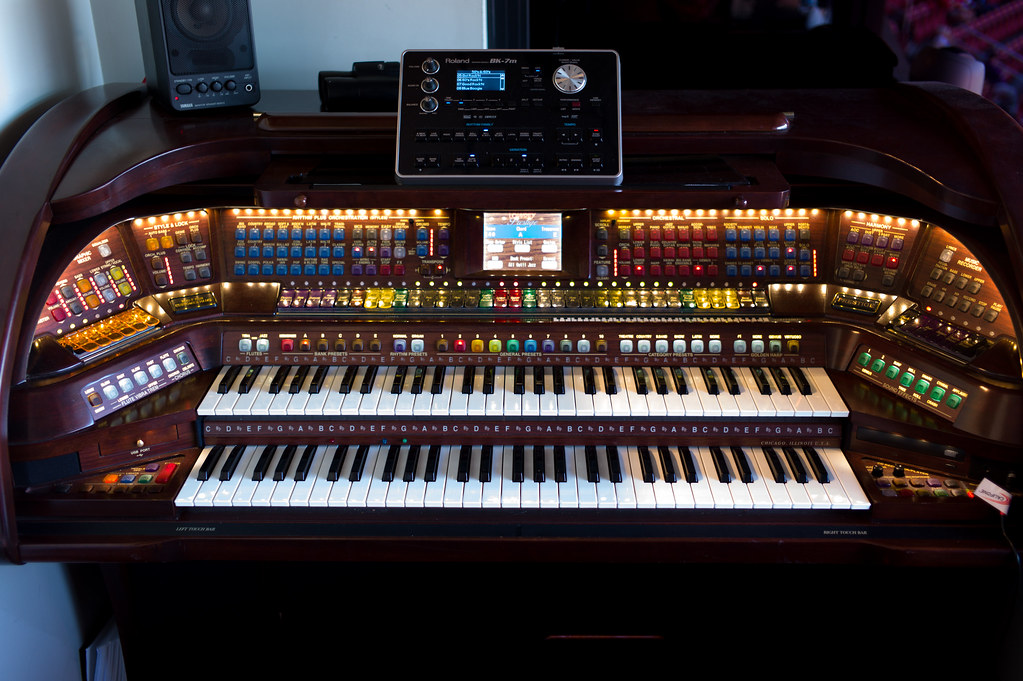 unless it’s an older model, most sports arena organs are electric and amplified via the PA system.

I think most stadiums went ‘cheap’ from the earliest opportunity. I think stadiums were using ‘home’ electric models from as soon as they came on the market. If they were paying more money, they went for ‘theater’ organs, so the question to ask is,

Is a theater organ missing anything than is standard on a church organ?

There are lots of differences in organs. As above, stadium organs are derived from the theatre organ. But it goes much wider than this. Even in church organs you have minimally German, French, and English voicing. Then some instruments are built for concert use and not for devotional use, but will still often follow a given school.
An organ designed to provide background music in services and to accompany a choir needs a different set of core capabilities to an organ designed to play front and centre in a concert setting, and even religious differences can influence the music and the desired sound palate.

Pipe organs have a pipe for every note at every different stop. The design of the pipe gives the stop its sound.To a very large degree no two pipe organs are the same. Budget, size constraints, use case and taste dictate what is built. From the huge range of possibilities an organ can be crafted to meet your desire.

Theatre organs add a range of “toys” or sound effects and other instruments allowing the organist a wide range of adornments when accompanying a movie. Drums, horns, xylophone, etc. Theatre organs try to provide a very wide palate of sounds. In their heyday they were trying to provide the organist with the ability to play almost anything appropriate. So they do include the capability of creating a church organ like sound. Not to the full extent of a dedicated church organ, but well enough to convey the idea. Theatre organs can become insane in size. As can stadium organs. The biggest organs being the Boardwalk Hall organ in Atlantic City and the Wanamaker Store organ (which is the largest in the world depends upon how you define it.) Another feature of theatre organ sound is tremolo. They can use a dedicated blower to vary the pressure across a wide range of intensities and speeds. Traditional organs may incorporate a temulant, but its effect is very muted in comparison with the capability of the theatre organ. That heavy tremolo is a big part of the theatre organ sound.

Organs can have different internal operation as well. Theatre organs came along after electrical systems were generally available for operation, so many are electrical or electro-pneumatic in operation. With switches under the keys and banks of switching logic attached to the stops to control the speaking of each pipe. Traditional organs are mechanical, with tracker rods, levers and rollers directly actuating valves in wind chests, with the stops selected by mechanically actuated sliders (little more than slabs of wood with holes in them) on the wind chests. What is interesting is that mechanical organs are still in favour as they provide a level of connectedness between the feel of the key and the opening of the valves that is missing with electrical systems.

Another thing about theatre organs is that they came at time when wind for the pipes was supplied by electric power. Whereas not all that long ago pipe organs were pumped by humans. Sometimes many humans.
The new technology meant that much higher pressures were possible, and organs could add much louder and more powerful sounds, especially horns. The Wanamaker Organ boasting the record loudest musical instrument known. Church organs were limited by the ability of the organ bellows to deliver wind both in pressure and volume. The available sound palate was thus also limited.

Traditional organs followed the music (and the money) and have traditionally been for devotional music in churches. The musical use case is different, and the sound palate different.

The basic sound of a theatre organ is different. Not inherently, but as a matter of taste and musical use case. The popular music of the time must also have been a big influence. Theatre organs came about when radio had spread music to the masses, and a revolution in popular musical styles was upon us. So they choose a different set of sounds from the available palate than devotional or concert organs and invent many new sounds.

I think most stadiums went ‘cheap’ from the earliest opportunity.

My understanding is that there are still a few old stadium pipe organs around, but any stadium either built or substantially upgraded since, say, WWII is almost certainly using electric.

(which is the largest in the world depends upon how you define it.)

Well, at least, church organs which have been installed in the past few decades. There are still a lot of older churches around, with older organs.

Seriously, I wonder how many of the older ones ever had pipe organs. Those things are really expensive.

Seriously, I wonder how many of the older ones ever had pipe organs.

I’ve been a member of several churches (all with buildings built in the early 20th century), including my current church, which have had real, live, actual pipe organs.

Yes, there are 2 big church organs within 2 blocks of my house but I’ve also been in a lot of small rural churches that never dreamed of such a thing.

OP, did you mean it sounds different from a pipe organ, or from a common type of home organ used in smaller churches.

In my mind non-pipe church organs are all Hammond organs and stadium organs sound pretty much like a Hammond played through a PA system.

Pipe organ building is a remarkably active business. If a church can afford one, and aspire to one, they will get one. Many aspire, and many find the money. Sure, there are lots of poor churches, and many that don’t have the desire for the music that comes with a traditional organ. But there are a lot of pipe organs out there, and a lot being built.

No doubt that electric organs of many kinds are popular, and there are a number of companies that build pipe organ sound alike organs (eg Allen, Rodgers) for church installations. There are now computer based programs for modelling (Organteq), or sampled (Hauptwerk) that are becoming very popular. You still need serious amplification and loudspeaker systems to match the sound. But they are a fraction of the price.

If you counted new church builds in 2021 and looked at the proportion of pipe versus some form of electronic emulation, pipe would lose. But across all churches, old and new. The answer might be interesting.

In my mind non-pipe church organs are all Hammond organs and stadium organs sound pretty much like a Hammond played through a PA system.

Yup. Really the sound of the Hammond organ defined the sound of electric organs for many. It has become an instrument in and of itself. No longer just an electric organ, but a Hammond Organ. The drawbar system of additive tone building was revolutionary, and the vagaries of the tone wheel system gave it a distinctive sound. But it has many faces. It isn’t just the cheesy stadium sound.
Everyone knows the riff and sound of Deep Purple’s Smoke on the Water. Once you get past Richie Blackmore’s guitar intro the riff is taken up by John Lord with his Hammond organ running into a cranked Marshal. Or try Keith Emerson of ELP. Get past his synths, and ELP was driven by a Hammond.

Hokay, that’s a great answer, even if it doesn’t mention ballparks.

The Wanamaker pipe organ at Macy’s in Philadelphia gets played daily, and is worth a pilgramage if you’re an organ nut. It is loud; even has stops labeled JAWS, KING KONG and BADASS (okay, I made that up, but it’s powerful, but luckily the organist on duty tempers that power with subtlety).

My dad once worked for Baldwin and he puttered around in his basement with things like using heavier gases in the pipes so you could use smaller pipes to get low notes; the opposite of the helium effect.

Not sure about temperament, but an organ should not need a stretched tuning to counteract the inharmonicity which exists in pianos.

I can’t imaging an organ tuned to something other than an equal(ish) temperament, otherwise you would be restricted to playing in a limited number of keys.

Or try Keith Emerson of ELP. Get past his synths, and ELP was driven by a Hammond.

Usually by stabbing it with a knife and riding it. Honest, he did know how to play classical music!

A wiki list of pipe organ builders worldwide. I think I saw most of the US ones as a kid; my father’s hobby was touring them.