Why does anyone today under seventy years old smoke cigarettes?

my mother was a light smoker when I was young; smoked Matinées, because that was what women smoked. Then one day when I was about 9 I noticed she didn’t smoke any more and asked why? She said that she always used to give up smoking for Lent, then one day after buying a pack after Easter, she said to herself, “If I can get by without smoking for 40 days, why am I smoking?” and tossed her pack in the garbage. Never smoked again.

Vaping and its offshoots will be around for a long time for similar reasons.

Hollywood portrayals of smoking are at best a vague shadow of what they were in the '40s and '50s. You’d never see a party or nightclub scene now with clouds of cigarette smoke obscuring the scene and nearly everyone puffing away like mad.

As a pathologist, smoking has been very very good to me.

*we had a Doper not long ago post this: “Because I personally think some of the alleged dangers of smoking are rather overblown. In fact now, I tend to support the rights of smokers.”

There are two separate questions: why do people now start smoking, why don’t people quit smoking.

My dear childhood friend, who died of AIDS during that holocaust, had a risk-loving hedonistic personality. He did every sort of drug at one point or another. When his lover died, he knew it was only a matter of time for him. He gave up everything bad for him, which was a long list in his case. Including cocaine and heroin. But not cigarettes. He simply could not. He was smoking on his deathbed. That is how addictive nicotine is.

A “random sample of 2 of the top 20 films from each year” sounds awfully fishy, to me. Two each year is a ludicrously small sample to begin with, and selecting two at random each year out of 20 leave lots of room for random noise (for instance, I’m pretty sure that Gravity was one of the top 20 films of 2013, and it literally had zero tobacco use, at all, in the entire movie. Randomly selecting that one would have been a huge skew). Why not just use all 20? And that’s if they are, in fact, actually sampling at random, and not cherry-picking the smokiest recent movies and the least-smoky old movies (which I rather suspect they are).

So they definitely didn’t pick Gravity and this study is 30 years out of date so it tells us nothing about smoking in films today.

Not sure how anyone can dispute that it is pleasurable. Or at least aspects of it are (if you ignore the stank and kill ya parts.). You’re playing w/ fire. There are all manner of little behaviors - how you tamp down the pack, pull off the ribbon, tap one out of the pack, lighter vs matches, how you hold it… And the communal aspect of giving someone a cig, lighting it for them…

When I stopped smoking, one of the weirdest things was figuring out what to do with my hands.

But yeah - young and stupid are about the only reasons I got for anyone starting smoking.

Their process was to have someone watch and encode tobacco use in every 5-minute section of each film, so using all 20 films over 30 years would probably have been prohibitively expensive.

Sadly the paper doesn’t include a list of the films they reviewed, which makes it impossible to evaluate the idea that their random sample included some biased picks.

I watch a lot more than 2 of the highest grossing movies a year and my perception is that tobacco use in film has decreased dramatically. It’s possible that my memory is biased here, but I’d be pretty surprised.

They include this chart in another paper. Looks like noise to me! 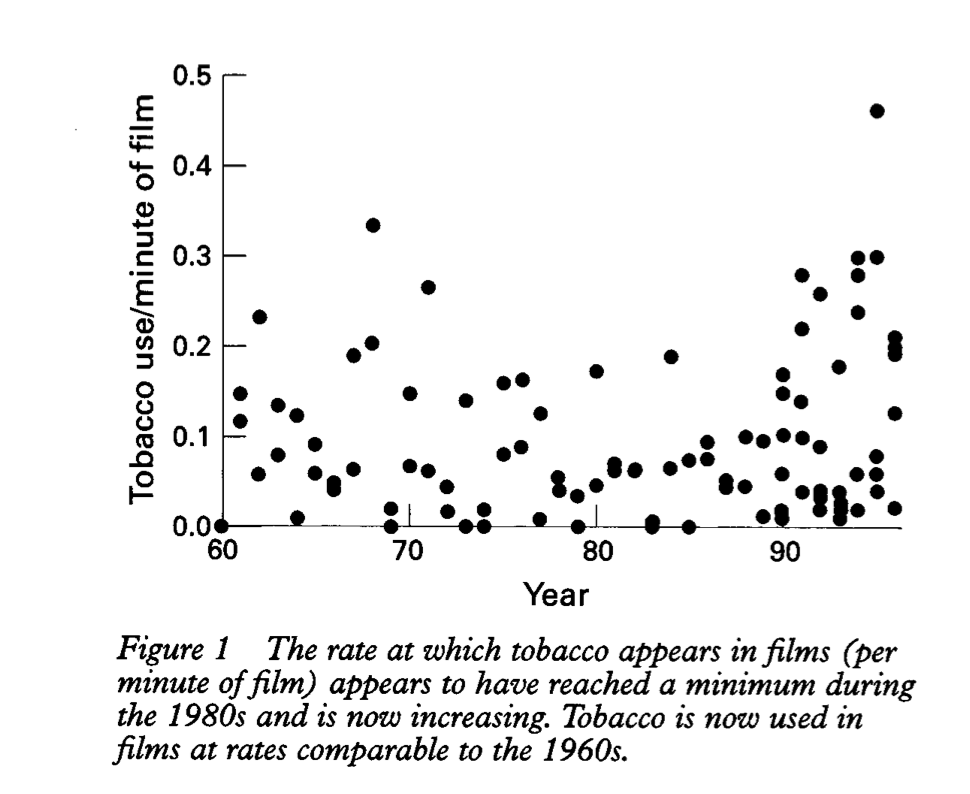 I’m under 70 and I’ve smoked off and on forever. Mostly “off” for the last 25 years or so. I’ve smoked as recently as last April through September.
Why? It’s relaxing. It simply is, even though it is probably raising your blood pressure. If you feel relaxed, that’s all there is to it. There is no debate. I just had my dog put down, and later that night thought: God, I could use a cigarette. And if they sold them one at a time, that’s what I would have done. So I bought a pack and smoked one. Maybe one before bed then, too. And first thing the next morning. Hell, I have this whole pack, I’ll smoke them slowly.
Months later stopping again after spending weeks at Pack-A-Day levels.
The shit is quite addictive.

And the first time you smoked, you probably gagged and retched, or possibly just fought back the urge to do so in order to try to look cool. Smoke, of any sort, is extremely unpleasant.

Odd. I’ve tried smoking cigarettes three separate times, between which were a number of years, and each time I remember thinking, ‘Yeah. I can see people getting addicted to this.’ No coughing, no retching. Actually all in all, a pleasant experience each time. Of course, I very intentionally neglected to pursue it further.

Okay, four times if you count the hookah joint.

When I first started smoking as a kid, I had no idea what inhaling actually was. I’d take a puff, pulling smoke into my mouth, then puff it back out cool as I thought I looked. It was a matter of time before I actually took that puff and pulled it deeply into my lungs. That was the coughing part.

The last time especially, I made sure to pull the smoke into my lungs. I was curious as to the effect it would have. Still, no coughing.

He was smoking on his deathbed. That is how addictive nicotine is.

My dad had one lung removed and part of another, and he still smoked. He died at 59. Never saw his grandkids. He started when he was 13.

I watch a lot of old movies, and, man, is there a lot of smoking especially in ‘B’ movies from the 30s and 40s. Someone’s having an emotional upset? Give 'em a cigarette. And some scenes? All 5 or 6 actors are smoking. It was like background noise.

So they definitely didn’t pick Gravity and this study is 30 years out of date so it tells us nothing about smoking in films today.

Yeah, there was more than one cite.

In any case, unless you don’t watch movies at all, it is pretty clear there is LOTS of smoking in film, far more than the 15% of smokers would show. So, show me your cite that disproves the issue, got cite? I love how people think that can disprove scientific research by personal anecdotes.

Why? It’s relaxing. It simply is, even though it is probably raising your blood pressure. If you feel relaxed, that’s all there is to it.

It is not relaxing. Overall, your stress goes UP if you are a smoker. However, when lighting up, your body does reward that hit of the nicotine addiction. So, sure, while actually smoking your body is getting that drug, so it is happy. (Nicotine is a stimulant, not, however). But when you are not smoking, and the drug leave the system, you are left worse off.

The shit is quite addictive.

Yeah, there was more than one cite.

In any case, unless you don’t watch movies at all, it is pretty clear there is LOTS of smoking in film, far more than the 15% of smokers would show. So, show me your cite that disproves the issue, got cite?

I’m not obligated to provide a cite for a claim that I didn’t make. That’s not how this works.

If you can support your claim, support it. A dogshit study that didn’t look at a movie made in the last 30 years is not sufficient.

It is not relaxing.

If you can support your claim, support it. A dogshit study that didn’t look at a movie made in the last 30 years is not sufficient.

Again, you can’t dispute a scientific study with a personal anecdote. That is not how science works.

I say that based upon scientific studies of stress levels in smokers.

Again, you can’t dispute a scientific study with a personal anecdote.

Sure, I guess, but I did no such thing. What on Earth are you talking about?

Did you read the other cites?

Did you? The 2nd one is from 1996. They do not support your claim that smoking is on the rise in films.