Why is Detroit batting FIRST against Oakland today if they're at home?

Have I lost my mind? The Tigers and A’s are in Detroit and Detroit is batting AT THE TOP OF THE INNING!!

ESPN says that it’s technically a home game for Oakland, despite being played in Detroit.

Which i the only logic thing I should have figured out!

It’s apparently the first game of a double-header, being played as a make-up game for a Tigers-A’s game which was supposed to be played in Oakland during the season’s first week, but which got wiped out by the delayed season start.

Detroit will be the home game for the second game today. 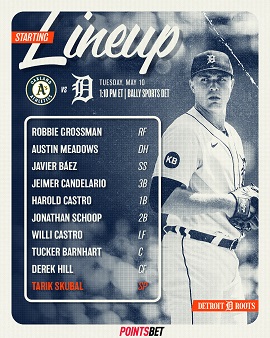 Even though playing at Comerica Park, the Tigers won’t be the home team for...

DETROIT, MI (WKZO AM/FM) - Thanks to the one week delay to the start of the baseball season due to the off sea...

You might still be going nuts, but not regarding this particular issue.