Why is the Tube in MRI machines so small?

I had to endure an MRI yesterday. I do it without sedatives. I spent the entire 30 minutes in the machine doing multiplication. 14x6, 16x8. It distracts my mind.

The claustrophobia is managable. It’s being jammed in that Tube that gets painful. My arm was in an awkward position and my shoulder got tweaked. Still a little sore today.

How do morbidly obese people get MRI’s? They wouldn’t fit in the tube of machine that my imaging center uses.

Why is the Tube in MRI machines so small?

The tube the patient is in is within a very large and powerful magnet. There are additional field coils that vary the magnetic field as the scan progresses (it is the field coils that create the noise as they operate.) The field you are immersed in needs to be both very powerful and, within the region being scanned, pretty homogeneous. This places a lot of serious engineering challenges before the designer. The cost of the magnet will go up probably as about the cube of the diameter, possibly even worse. The magnet is by far and away the dominant cost of the machine. So there is a huge cost imperative to get the tube diameter down.

That also explains the long questionnaire that I filled out. There’s no metal in my body. Except dental fillings and those are ok for an MRI.

I did try to walk into the treatment room with my N95 mask.

Forgot it has a metal nose clip. The Tech made me remove it.

How do morbidly obese people get MRI’s? They wouldn’t fit in the tube of machine that my imaging center uses.

We get to go to the special Large Bore MRI, which are few and far between. And it’s still not very large, it wouldn’t fit someone who’s like 600#. I don’t even think a broad-shouldered man like a NFL lineman would fit comfortably in one.

Shoulders are my problem. I’m not that broad shouldered, but my skin scrapes on the tube.

Thank goodness I wasn’t getting a MRI of the head. I’d request a sedative for that. That requires full immersion into the tube.

We get to go to the special Large Bore MRI, which are few and far between.

These are not so rare anymore. There are three or four within my reach in North Georgia.

The large bore machines are GREAT!

More specifically, the more intense the magnetic field, the more detailed the image can be. My data is a few years old, but what I learned was the intensity of the magnetic field for a scanner magnet big enough for a human to fit through costs about one million dollars per tesla.

To create some familiar perspective, those very powerful neodymium iron boron permanent magnets you can buy, the ones that can shatter themselves if you let them jump together, can deliver field intensity of about 1.5 T. You can pour yourself a bowl nearly full of water and let it settle, then hold one of these just above the water while you get down low and look at the reflection of the distant background in the water’s surface. You will see a distorted footprint of the magnet caused by the magnet pushing the water down, due to it being diamagnetic. Diamagnetism is a material property that repels magnets, but it’s so weak that we don’t think of it as something we can actually witness. These are strong enough that we can actually see it. A more diamagnetic and lighter substance such as graphite can actually float above a magnet of this type.

Well, medical MRIs try to achieve field intensities this high and higher, and it is very costly. It takes liquid helium to get superconducting field windings cold enough to do it (check out MRI quenching videos on youtube for a fun consequence of this).

Here’s a link to recent developments in an 11.7 T MRI machine. 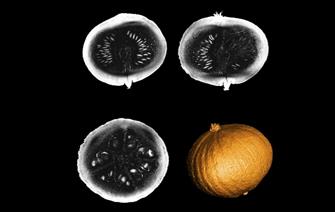 The most powerful MRI scanner in the world delivers its first images!

September 2021, the 11.7 Tesla MRI of the Iseult project, the most powerful in the world for human imaging, has just unveiled its first images.

IIRC there’s a video out there of a live frog in a solenoid core at something like 30 T, which is so strong that it levitates the frog due to its water content. 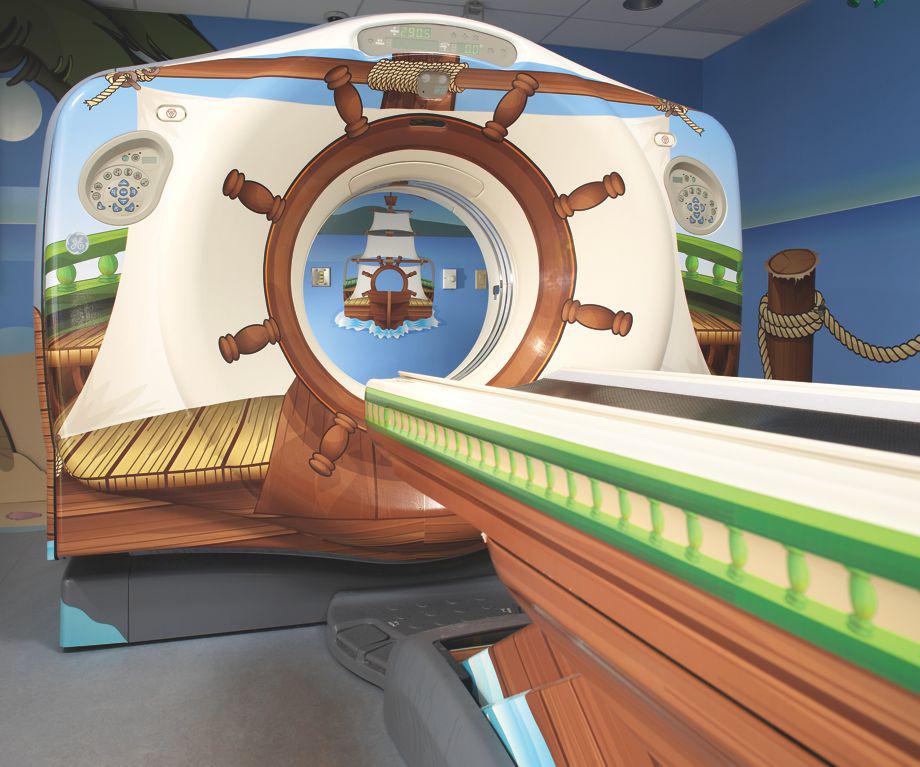 Kids Were Terrified of Getting MRIs. Then One Man Figured Out a Better Way.

By thinking holistically about how children experienced and interacted with the technology, Doug helped transform the MRI suite into a kid’s adventure story, with the patient in a starring role. Making no changes to the complex technology inside the scanner, Doug and his ad hoc team applied colorful decals to the outside of the machine and to every surface in the room, covering the floor, ceilings, walls, and all of the equipment. They also created a script for machine operators so they could lead their young patients through the adventure.

One of the prototypes is a pirate ship worthy of an amusement park ride. The ship comes complete with a big wooden captain’s wheel that surrounds the round opening of the chamber—a sea-faring detail that also makes the small circumference seem less claustrophobic. The operator tells kids that they will be sailing inside the pirate ship and they have to stay completely still while on the boat. After their “voyage,” they get to pick a small treasure from the pirate’s chest on the other side of the room. In another story, the MRI is a cylindrical spaceship transporting the patient into a space adventure. Just before the whirring and banging of the machine gets louder, the operator encourages young patients to listen closely for the moment that the craft “shifts into hyper-drive.” This reframing transforms a normally terrifying “BOOM-BOOM-BOOM” sound into just another part of the adventure.

Another factor is that, generally speaking, the closer you can get a sensor to the thing you’re trying to sense, the better (or easier) it is to sense that. So you want to make the stand-off distance as small as possible, to produce the best results you can get.

Of course, there’s the trade-off of needing to fit a range of patient sizes, so we end up with a tube that just barely fits an average size person.

Thank goodness I wasn’t getting a MRI of the head. I’d request a sedative for that.

I get a full brain MRI once a year, and it’s not being enclosed in a small space that bothers me (I’m not a big person) it’s the noise. Even with earplugs, it’s deafening, especially if you have to do double scans, one with contrast and one without. It takes about 30 minutes, but I’ve never requested or needed a sedative. I just close my eyes and try to lay as still as possible with the sound of a freight train coming at you for half an hour. My 8 yo grandson has to get a double brain scan every 6 months and he gets a sedative. He couldn’t do it any other way.

my skin scrapes on the tube.

“scrapes?” You mean it scratched your skin and drew blood? Or did its smooth surface touch and slide across your skin?

The tube rubbed my skin when the techs pulled me out. It was a reminder of being constrained in the tube.

There wasn’t any abrasion. Your correct that the smooth surface just slides across. Like taking off a tight jacket.

Even with earplugs, it’s deafening, especially if you have to do double scans, one with contrast and one without. It takes about 30 minutes, but I’ve never requested or needed a sedative. I just close my eyes and try to lay as still as possible with the sound of a freight train coming at you for half an hour

That was my experience - a LOT of noise. Once I got used to the sound of it I wasn’t that troubled and I actually fell asleep during the test. I’m also a physically small person so I fit inside the tube just fine.

I can see where a person might have trouble if they were just physically big, or something between an anxiety attack and a total freak out if they had claustrophobia or some other issue with very small spaces. I didn’t mind at all that a sedative was an option if I had wanted one, or that they had a button for me to push if I couldn’t cope with the confinement, clearly some people need those things.

Thank goodness I wasn’t getting a MRI of the head. I’d request a sedative for that. That requires full immersion into the tube.

So does one of the heart; or at any rate, that’s what I got. (I could have asked for a sedative, but decided to try without.)

It was a large bore machine, though – they are indeed becoming more common. Still not very large; but certainly large enough for at least a moderately fat person.

I just close my eyes and try to lay as still as possible with the sound of a freight train coming at you for half an hour.

Maybe it depends on the type of scan; but I was braced for that and was relieved to instead get stretches of silence inbetween a batch of bangs and buzzes – none of which, also to my relief, hit any of the frequencies which seriously bug me.

Some of the silences were long enough to be a little unnerving on their own – ‘did they forget about me? did something go seriously wrong someplace else, and everybody’s too distracted to come get me out?’ but I was helped both by the presence of the panic button, which I didn’t use, and by the fact that I figured I could just about manage, with difficulty, to squirm back out of the tube on my own if I absolutely had to.

I’m a bit weird in that I find small confined spaces (that I am not actually trapped in) to be comforting. I used to go spelunking, in both natural and urban(read storm sewer) caves.

I’ve never had an MRI, but I think I would be more or less fine.

I generally don’t like to get into machines where they leave the room to turn it on.

Can you request an open MRI machine or does the doctor make that decision?

It’s not like x-rays, where they are worried about it damaging them. The issue is that they may be wearing glasses, a watch, have a phone in their pocket, it other stuff that interacts badly with the magnetic field.

Can you request an open MRI machine or does the doctor make that decision?

When I needed to get an MRI the doc said I could opt for an open machine but that the enclosed ones gave better pictures, meaning if there was a serious problem we’d be more likely to find it on the first scan.

Open MRI’s are great for folks who, for some reason, really can’t use the enclosed ones but apparently there are reasons to prefer one over the other.

If I may piggyback a tangential question:

Why do MRIs take as long as they do? What keeps it from taking about as long as, say, an ultrasound?

And is the time element something that can be technologically improved? As an engineering problem strictly (ignoring costs for the nonce).