Why is Trickle Charge recommended over Fast Charging a car battery?

I’ve always been told that’s better for the battery than using the 15 Amp fast charge.

I’m using Automatic. But have a option to use a manual cycle. I’ve heard you can condition the battery’s plates with manual? But I’m not sure how to do it.

What’s the straight dope on charging car batteries? Why is Trickle charge less harmful to the battery?

How do you recondition a battery using manual charge?

Charging a battery involves moving ions.
If you fast-charge a battery, it’s possible that you can exceed the rate at which the active material can be re-arranged in the the battery, which leads to the excess energy causing electrolysis (turning water into Hydrogen and Oxygen). This causes the battery to lose electrolyte, and eventually to fail.

Here’s a typical warning. Basically the same thing my dad told me when I was 15. Use Trickle charge to keep from damaging the battery.

Never knew why it would stress a battery. But I always use Trickle since that’s what is recommended.
http://www.carbatterychargerscentral.com/car-battery-charger-specs/

Charge Rate.  If possible it’s better to charge your battery with the slow charge rate because it’s safer and puts less stress on the battery which can make it last longer however, it will take longer (usually overnight) to charge the battery.  So when considering a particular unit remember that you will probably be using the slow charge rate but, it’s nice to have the Fast Charge Rate for emergencies.

Slow charging gives a more thorough charge, in terms of ampere hour capacity. Charging rates are a compromise, too high of a rate and plates warp, too low and the battery spends too long outgassing and boils off the electrolyte. Outgassing is “good” but it needs to be minimized, especially since most batteries sold are sealed maintenance free types.

What’s helpful is to attach a voltmeter and watch, while comparing the voltage observed against a charging chart. It starts to make sense.

Also good for those insomnia moments, everything you wanted to know about batteries and charging: http://www.batteryfaq.org

All of that’s correct but it might be a little opaque on something basic: batteries don’t store electricity; they store a chemical solution that can be changed to a charged or discharged state. A capacitor stores electricity directly and can take a charge pretty much as fast as its internal resistance will allow - often microseconds unless it’s really huge (into the farads).

But a battery has to convert incoming electricity into a charge in the chemical components, and for all the reasons given above, that’s best done at a fractional rate to its potential draw current (which can easily exceed 1000A) and internal resistance.

I just read beowulff’s and the other answers. Thanks.

I found a youtube explaining how to recondition a sulfated battery with a manual charger. I guess that’s a last resort to save a battery before replacing. 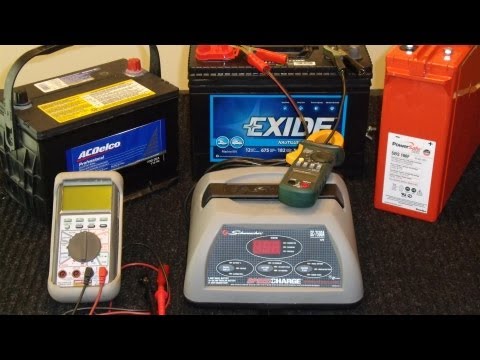 Sulfation is kind of a misnomer used in that context (to sell “special” chargers). All lead-acid batteries have sulfation, because that’s how it works, charging converts the sulfation back into electrolyte (sulfuric acid). Any charger is a “desulfator” by definition. What actually happens, the sulfation on the plates of a partially discharged battery eventually turns hard, and no amount of charging will return it, the battery capacity is permanently reduced. No reason to get silly about it but batteries (good ones) are expensive and should be kept charged when possible. A good battery charger is a worthwhile investment, I have never understood why they are not sold with cars as a routine matter, or part of the car itself.

I’m a bit concerned about my old vans battery. It sat for a year. I should have started it regularly.

I have my dad’s Schumacher that he bought a few years ago. It’s got a 125 Amp crank start for emergencies.

Always use a charger to bring up a battery to a full charge, the alternator can’t do this effectively and may be damaged. A dead, sulfated battery presents a tremendous load to the charging system and may burn up the alternator stator or diodes. This load is why you’ll often hear groaning belts after a jump start. A defective alternator can also ruin a good battery, the idea is to avoid joining the “alternator/battery of the month” club.

Best to have the battery load tested or conductance tester. It may charge up, but won’t hold a charge.

I didn’t realize that. I used to drive around the city on the Interstate to charge a weak battery.

This one was totally dead. So I’m using the charger.

But I’ll be careful not to rely on the alternator from now on.

15 amps is not really considered a fast charge. It is above a trickle charge but still well below a charge rate that will damage your battery.

Cars that sit for extended times should be hooked to a “battery tender” rather than a “battery charger”. A tender is designed to keep a battery at a full charge using small amounts of current. I have a classic car that sits a lot and I leave it hooked to a CTEK brand tender.

If you don’t have access to an electrical outlet and know the car will be sitting a long time, disconnect the negative battery cable. A disconnected battery will hold its charge for several months.

If you don’t have access to an electrical outlet and know the car will be sitting a long time, disconnect the negative battery cable. A disconnected battery will hold its charge for several months.

Yes, but… Check owners manual and other service information first, assuming anything made in the last 10 years or so. Late model vehicles can, in some circumstances, lose much more than just KAM data or radio presets. Many vehicles will need a “relearn” process, for idle trim and shift points. Follow the owners manual exactly. This is no big deal.

BUT - Some vehicles will need a trip to the dealer if the battery is disconnected (!!!) for a “reset” - certain Mercedes for example, the AC will be completely inoperative, anti-lock brake modules etc. Some makes, the power windows won’t work, etc.