Why Ms Clinton instead of Mrs Clinton?

Why would it be wrong? She is just choosing to let people know she is married.

Traditionally, Mrs. was used only in conjunction with the husband’s name. In fact, the convention was that, formally at least, a married woman would be known by her husband’s first and last name, e.g. Mrs. John Smith. It was only later that it became more acceptable for a woman to use her own first name, as e.g. Mrs. Mary Smith. (Of course, in casual conversation she would be addressed by her first name Mary.)

It’s a matter of convention, but I think that using “Mrs.” still implies that the surname used is that of the husband. If a woman is using her own maiden name, it is more common to use Ms.

Along with some of the other responses in this thread, this seems overly snarky, but OK. I don’t get offended easily.

I do know what year this is and I do think I understand the difference. I took to the Google to make sure. In particular, this is how I always understood and used it "… “Miss” when addressing young girls and women under 30 that are unmarried. Ms.: Use “Ms.” when you are not sure of a woman’s marital status, if the woman is unmarried and over 30 or if she prefers being addressed with a marital-status neutral title. Mrs.: Use “Mrs.” when addressing a married woman.”

When to Use Miss, Ms. or Mrs.: Everything You Need to Know | Shutterfly

Whether you are greeting a woman in person or addressing cards and letters, learn everything you need to know about when to use Miss, Ms. or Mrs.

In which case the default for Clinton would be Mrs, unless there’s other reasons to use Ms, as was stated upthread, to distance herself from Mr Clinton, in which case it’s proper/polite to say Ms.

This is kind of interesting though, courtesy of the Googles again "Hillary Clinton, one might think, would chose the more progressive title ‘Ms.’ the Times said. “But she prefers ‘Mrs.’” 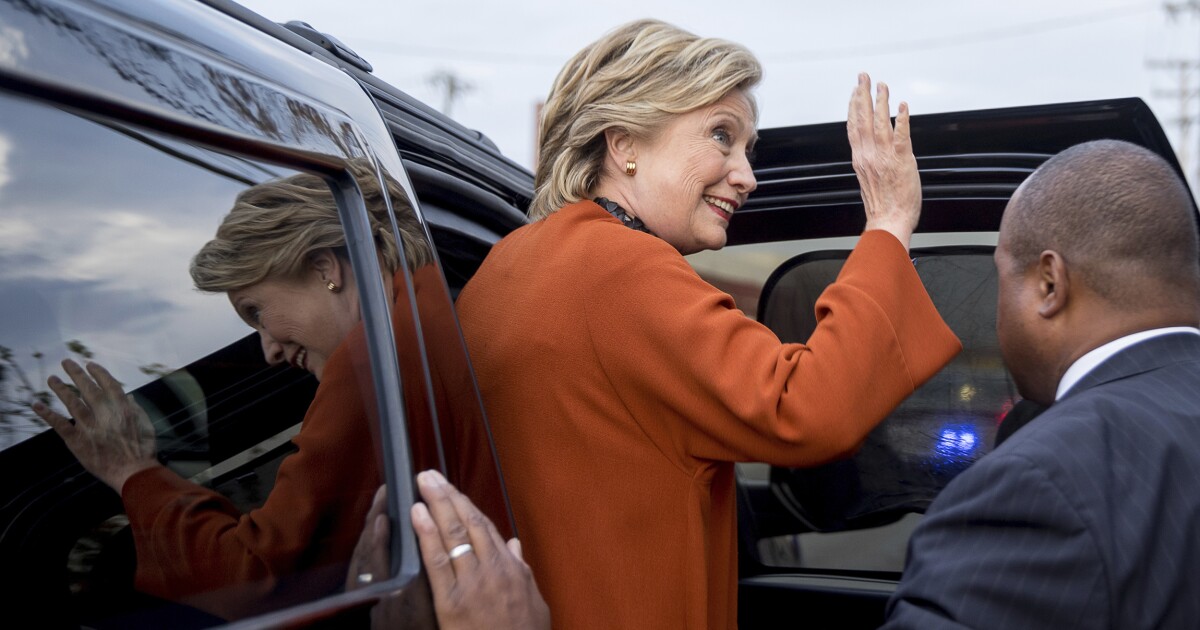 Is Hillary Clinton a Mrs. or a Ms.?

Hillary Clinton's historic run as the first female major party presidential candidate has highlighted a small but nagging problem for news outlets: Is she Mrs. Clinton, or Ms. Clinton?

So it appears I’m not alone or backward in wondering.

Yes, but we’re now in the early 21st Century and the rules have changed.

Except there are no well-defined rules. I wouldn’t say that using Mrs. with a woman’s maiden name was exactly “wrong,” but it is at least a potential source of confusion. Lacking other information, it might be assumed her husband’s name was the same as the surname she was using.

So in her case it is probably politics. Ok, I can understand that.

Outside of her is this a new thing with other women?

And as others have said, “Ms.” was specifically invented not to indicate any marital status, so it has never meant that the person was divorced.

The new thing now is “Mx.” as a gender-neutral honorific. Not only does it not indicate marital status, it also doesn’t indicate gender, so both men and women and whatever else can all be “Mx.”

I think you are simply confused, or Ms-understanding. Miss and Ms. are two different words with different meanings.

In olden days, Miss or Mrs. was used for unmarried and married respectively, because a women’s status (i.e. who owned her) was important, especially in the days before women could vote.

Seriously, though, around the late 60’s and early 70’s, along with bra burning and other women’s lib activities, came the suggestion that the freshly coined Ms. replace the two other choices in all circumstances, since making marital status an important distinction in naming was considered patronizing and demeaning by the lib movement. It also removed the ambiguity - “How do I address this woman? Is she married?”

You may not remember the days when a woman’s correspondence, if she was married, was addressed to “Mrs. John Smith”, to make the point more insulting. (The rule, IIRC, was that when she was widowed it was time to call her “Mrs. Jane Smith”.)

So if someone calls the person “Mrs. Hillary Clinton” they are being either respectful and/or old fashioned, or insulting, depending on the writer’s intent. In the last many decades, it has never been wrong to say “Ms. Hillary Clinton”. The only exception is when the person herself wants to be called Mrs., in which case she will let you know. Such persons are fewer and fewer every day.

around the late 60’s and early 70’s, along with bra burning and other women’s lib activities, came the suggestion that the freshly coined Ms. replace the two other choices

I think you are simply confused, or Ms-understanding."

If someone calls me Miss or Mrs. in a professional setting, I reply “It’s Doctor.”

I suppose that, early in its usage, “Ms.” might have been disproportionately preferred by divorced women, who no longer wished to be defined in terms of their ex-husbands. But it’s never, for as long as it’s existed, been incorrect usage for any woman.

It would not be incorrect to refer to Hillary Clinton as either “Ms. Clinton” nor “Mrs. Clinton”. Which one a writer will choose will depend on which the writer considers more respectful, whether the writer wishes to be respectful, and (if known) Clinton’s own expressed preference. Some publications might also have a style guide which says that “Ms.” is always preferred (as it can never be incorrect), or always “Ms.” unless the person in question has specifically requested otherwise.

According to the traditional rules of etiquette, she is (at least in her professional life) neither Ms. nor Miss nor Mrs. Clinton, but Senator Clinton. Some titles are used for life, even after leaving office (e.g., Senator, Ambassador, Judge, General); others are only used while in office (e.g., Secretary, Governor).

As she was the 67th Secretary of State, Georgetown University refers to her as the Honorable Hillary Rodham Clinton.

Chronos, when it came into more common use in the 1970s, at least where I lived (DC area), it was younger women who used it more frequently, not women who had divorced.

I suppose that, early in its usage, “Ms.” might have been disproportionately preferred by divorced women, who no longer wished to be defined in terms of their ex-husbands.

As a child of the late 70’s early 80’s, that’s my experience/exposure to the prefix.

But it’s never, for as long as it’s existed, been incorrect usage for any woman.

If that was implied by my question it wasn’t intended.

Except there are no well-defined rules. I wouldn’t say that using Mrs. with a woman’s maiden name was exactly “wrong,” but it is at least a potential source of confusion. Lacking other information, it might be assumed her husband’s name was the same as the surname she was using.

It does indeed cause confusion. When my daughter referred to my husband and me on her wedding invitation with the only combination I considered wrong* ( Mrs My Name and Mr His Name)** , I came to the conclusion that either 1) the "rules: have changed or 2) the people writing for wedding websites are so young they have never heard anyone over the age of 12 referred to as “Miss” and therefore think “Ms.” signifies an unmarried woman and “Mrs” a married one, regardless of name. I kind of suspect it’s #2 , rather than anyone actually knowing how the honorifics have been used since the '70s and deciding to change the usage.

** I’m certain her more distant in-laws believe that I divorced/was never married to her father and am married to a Mr Mylastname who didn’t make it onto the invitation.

I always use Ms (no period) because it is not an abbreviation for anything. From Google I learn that some styles do require the period, although I see no reason for it.

Next step: M for either Ms or Mr. (or of indeterminate sex).

What really used to annoy me was when NYT, The Times etc called Benazir Bhutto,* Mrs Bhutto.*. That was totally incorrect, starting with the fact that “Bhutto” was her name, not her husband and she didn’t use her “married” name, like ever.

Outside of her is this a new thing with other women?

This is how it’s been used since Ms. was coined in the 70s. Ms. was coined specifically to not have a woman’s title determined by her marital status any more than a man’s is. It was, IME, in the 90s, when it became the general default, rather than based on the woman’s particular preference.

Next step: M for either Ms or Mr. (or of indeterminate sex).

There’s a move for Mx. (pronounced məx) as a gender neutral. Which is better than ‘M.’, for a couple reasons - it’s not mistakeable for the abbreviation of Monsieur, or for the first initial M; and as awkward as ‘məx’ is to pronounce, it’s better than ‘mmm’, which would be the logical pronunciation of ‘M.’…if not ‘Em’, which goes back to the ‘first initial’ confusion, or confusion with someone with the first name Emily, Emma, etc.

As a child of the late 70’s early 80’s, that’s my experience/exposure to the prefix.

It takes awhile for social views to change, but that doesn’t mean those who’ve misunderstood from the beginning are correct. I was in my teens when “Ms.” first came into vogue. Since I was old enough to understand the context, I assure you it was never meant or popularly used solely as a means of addressing divorced women. A man’s honorary title didn’t indicate his marital status. He was Mr. from start to finish.* The use of Ms. was intended to eliminate that distinction for women.

Like all such changes, the term Ms. entered common usage unevenly. For a time, some people assumed it was a form of address for single women only, the liberated equivalent of Miss. Their thinking seemed to be that any woman who was married would want everyone to know she was lucky enough to have reached the status all young women supposedly yearned toward. They were wrong even then, but perhaps that’s how you got confused.

*Technically, the correct title for a male under age 18 is master, though it’s seldom used now.

The only reason to use “Mrs.” or “Miss” is for someone you know has a preference for it. Otherwise, just use “Ms.”. Hard to believe anyone doesn’t know this by now.

Miss <firstname> is a common form to address all women some places, I don’t see anything wrong with that myself. If there is please let me know.