Why not more varieties of beer in a mini-keg form?

The Heineken mini keg holds over a gallon of beer. Because it’s compact and lighter than the same quantity of bottle beer, I find it a superior beer delivery vehicle. You can get about ten pint glasses out of it (more if using smaller red cups).

While a case of 24 beers often has a cheaper price per beer, the utility of not needing to deal with glass is handy.

Only problem is only Heineken and Newcastle are available in these mini kegs. Why? I really wished I could get Sierra Nevada, Fat Tire, or Blue Moon in mini keg format

Bottles and cans come with their own delivery systems. Mini-kegs are useless without a glass.

Unless you do a mini-keg stand, of course. In which case, put it on YouTube!

Nitpick: if by “smaller red cups” you mean the ubiquitous red Solo cups, those actually hold about the same amount as a pint glass.

Otherwise, I think the biggest stumbling block with the mini nitro kegs is having a place to stick them in the fridge. Cans and bottles can form a matrix around all the other groceries that I’m reliably informed we also need to have in the fridge.

Again, the advantage is you can take it places that forbids glass. And I was thinking of the smaller 12oz cups (which it could provide about 15 cupfuls).

Compared to fifteen cans of beer, it’s lighter and take up less space. Solo cups can be nested before use, and if it’s just a few people getting hammered you only need one cup per person.

Sounds like you need a better beer store. I think the biggest liquor store near me has about a dozen types of beer in 5L kegs.

Sounds like you need a better beer store. I think the biggest liquor store near me has about a dozen types of beer in 5L kegs.

Really?! So far I’ve only seen it in Heineken and Newcastle. Guess I’ll have to look around for stores with other varieties!

I’ve seen a lot of other varieties of the 5L kegs, but only the Heine and Newcastle with the built in nitro systems. With the other ones, I think you either need to drink them in a sitting or have some sort of other gizmo to keep them fresh. Some of them don’t even have a tap, just a hole in the top!

(And, continuing my nitpickey sidetrack, there are a few real 12oz keg cups out there, but the much more common ones are 12oz if you fill them up to the first lip but 16oz if you fill them up all the way. I believe those are often labeled as 12oz, leading to much confusion and overconsumption that would surely otherwise not occur at a keg party!)

6 packs are probably cheaper and take up less space,also like greasyjack said.im sure the 6 packs keep the beer more fresh then a 5 gallon keg

Yep. I think the Heineken and Newcastle kegs are popular because they fit a couple of the counter-top keg coolers that are on the market. Those cans are pressurized, whereas other brands rely on a bottom tap and top vent to dispense via gravity. You can even buy empty cans for home brewing. Do a Google Image search for an idea of what’s else is out there. I’ve had and/or seen Spaten, Grolsch, Warsteiner, Dab, a Russian one, Coors, Bells, and I’m sure there are more I’m forgetting.

Not as small as you’re looking for, but still better than buying by the case- they range from 45-70 bucks depending on the beer.

Again, the advantage is you can take it places that forbids glass.

Plenty of good beers come in cans, and there are even the aluminum bottles. IMO the mini-kegs have very limited appeal for a group of a certain size. What that size is will depend on the thirst of the group.

Part of the issue is that the keg Heineken uses is actually patented by them: 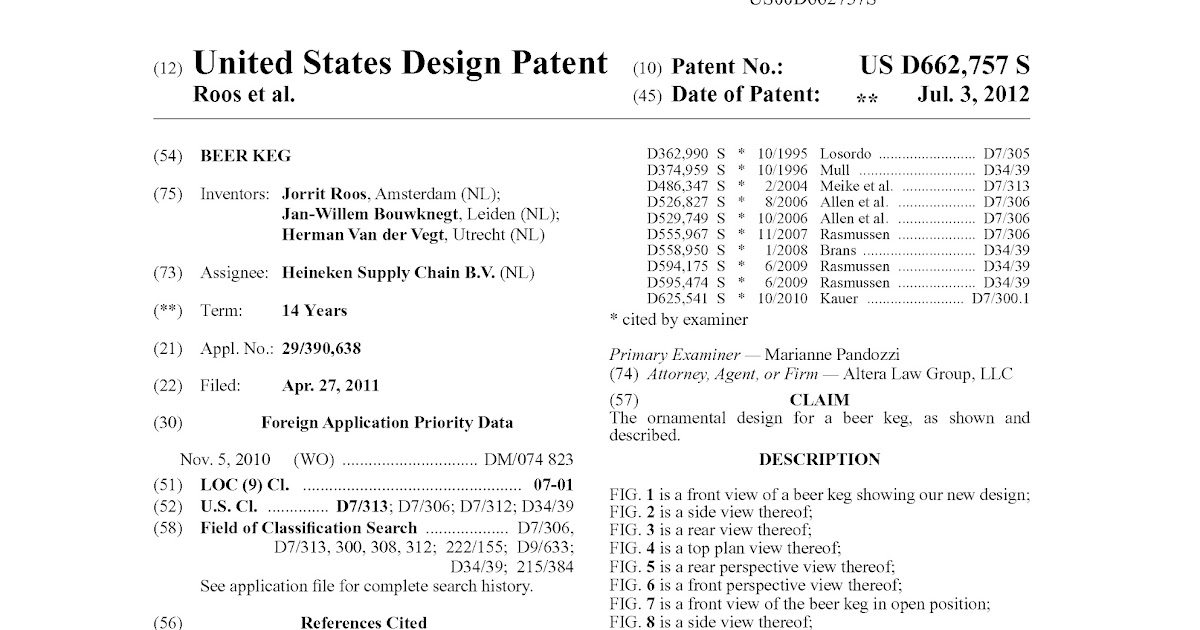 Sticking with the food and beverage theme, this patent filed by Heineken's supply chain division in April 2011 describes the design of thei...

So others would have to pay royalties to use it, assuming Heineken was even interested in offering such licensing agreements.