I hope these photos leads to her arrest. Why would anyone do this? You could buy that rubber duck at Walmart for less than $7. Stealing from a kids grave on Easter? For that? :dubious: 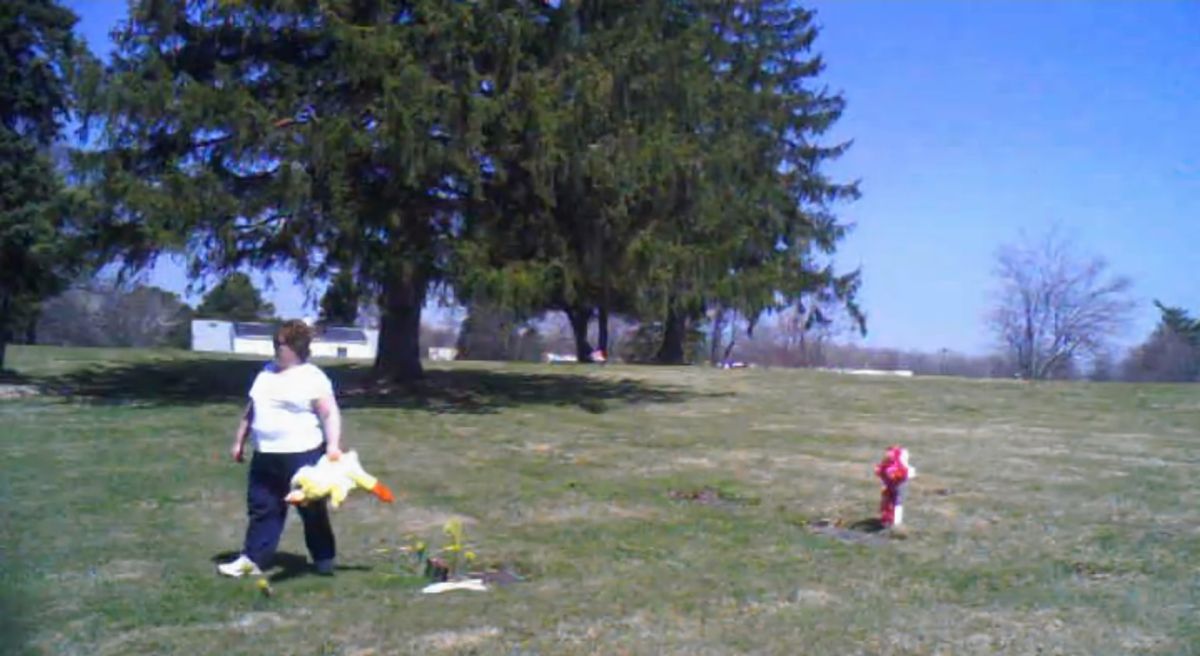 It takes a special kind of jerk to rob a baby’s grave. Police in central Ohio are asking for help in identifying a pudgy woman captured on a hidden video camera waddling off with a stuffed duck that had been placed on the grave of a 14-month-old.

The Ontario Police Department has posted the video on its Facebook page, along with a number for tipsters to call if they recognize the female thief.

The boy’s family had left the toy duck on their dead son’s grave as an Easter present. About five hours later, the grave robber walked off with it.

Police said the boy’s family had contacted officers a few years ago, when items started disappearing from grave of little Hayden, who died in 2007.

People like that deserve a special circle in Hell.

I understand the sentiment of wanting to leave something for your dead kid, but at the same time its rather wasteful, and not of any particular use. So even if you can get the same thing for $7 at wallmart - why bother when the one on the grave is “going to waste” anyway?

“Going to waste” is in inverted commas, as its NOT “going to waste” if people come to the grave regularly and gain pleasure / solace / happiness from seeing the duck.

On the other hand, the number of times I have seen something left on a grave and then just sit there and rot…

I recall leaving items on my mother’s grave the last time I was able to visit - for me, it was the act of “giving” to her, the thought of placing them there more so than having them stay on the grave that gave me pleasure. (Mostly because I knew I wouldn’t be back for a number of years).

I always said HBO was a bad influence…

I’m betting those pictures are good enough for someone to recognize her.

This was posted on Facebook today by a friend of mine who lost a child. Interesting perspective to consider for those of you ready to burn this woman at the stake:

“Before I start my rant, which I am sure will really annoy a good bunch of people, I will start by saying I am not naïve, and I know some people just suck. In regards to the woman stealing the ducky off a gravesite of a child. Nobody knows what is going on in that woman’s head. She may be a psychiatric patient, she may have no concept of reality, she may be incompetant with no understanding of boundaries and what is right or wrong. Maybe just maybe she is a woman with a broken soul and a broken heart that lost a child that loved a duck and seeing it made her snap. Point is, right now, nobody knows. Some of the comments made by some people are just so cruel and vindictive. Coming from a mother that buried a baby, if you are a mother and you are driving through all saints cemetery, and you see a ducky on my babies grave, and you lost a baby that had a ducky just like that and you need that ducky to soothe your soul, then I want you to have it. If you are driving through the cemetery and you see a ducky you want to sell on ebay, then you just suck. Shame on you bigmouths sending this woman to hell, wanting to see her shot, stoned etc…you just don’t know.”

:rolleyes:
So now whenever someone acts like an ass we have to wait until we see if they’re a poor damaged soul?
Fuck that. She’s a bitch and I don’t give a shit what her motivation was.

I wonder if she went around getting stuff off other graves. Easter is a day that families visit and leave flowers or small items. She may have collected some stuff to sell.

We should find out pretty soon. Somebody will recognize her from those photos.

In “Midnight Cowboy,” Ratzzo committed his only inexcusable act by filching flowers from another head stone to put on his father’s. Dunno, that scene affected me a bit. An impoverished son paying homage to his late impoverished father.

In response to ZipperJJ, I that in the context of public outrage over such an incident, it is proper to react first then apologize if the facts are different that what you expect. Its silly to say nobody can have a reaction until all the facts are in, and as long as the rage is limited to spewing on the internet, its fine to condemn her to the lowest circle in hell. If she turns out to be crazy, then I’ll apologize, but neither my rant nor my apology will really affect her, so I’m entitled to jump to conclusions

I don’t care how you guys react. I just thought it was an interesting perspective from a mother who has lost a child.

I hope someone robbed her trailer while she was at the cemetery stealing.

Huh. Jerkiness aside, I wonder whether a law has actually been broken here. There’s kind of a fine line between leaving a token on a grave and littering. So, is a grave actually private property? Does leaving something on a grave count as abandonment of property? Dead people probably can’t own anything, and there’s no evidence that the family wanted the duck back. At what point does the duck become less a token of remembrance and more of an mouldering eyesore that should be removed while wearing gardening gloves (granted, that point is likely to be more than five hours after placement, but it’s not long after the next rainstorm).

Huh. Jerkiness aside, I wonder whether a law has actually been broken here. There’s kind of a fine line between leaving a token on a grave and littering. So, is a grave actually private property? Does leaving something on a grave count as abandonment of property? Dead people probably can’t own anything, and there’s no evidence that the family wanted the duck back. At what point does the duck become less a token of remembrance and more of an mouldering eyesore that should be removed while wearing gardening gloves (granted, that point is likely to be more than five hours after placement, but it’s not long after the next rainstorm).

“… on a hidden video camera waddling off with a stuffed duck…”

Well, the item was placed with purpose at a location that the item owner had specific rights to. Do people own grave plots anymore? Or lease or rent them? I mean, the mother of that child had to have paid some amount of money in order to have her child buried there, and there’s got to be some sort of fee for upkeep. It’s not like a roadside memorial where there’s no legal, contractual relationship between the bereaved and the physical location.

I imagine the cemetery also has a policy regarding items left on graves. Perhaps they collect them after a set amount of time has passed or twice a week or what have you. Once an item is placed on the grave, if it doesn’t belong to the bereaved, then it must belong to the cemetery.

One when I was a teen my mom and I watched some kind of “documentary” on TV that purported to show pictures people took at a cemetery that ghosts showed up on after development (yes this was back in the analog days). So we picked up a couple of those cheapo disposable cameras and headed to our local boneyard.

It was pretty uneventful (and ghost-free from start to end) until I came across the grave of a young child that had several toys on it. Seeing that, my heart dropped about 3 feet and I suddenly felt like shit taking these pics.

The idea of actually taking something from the grave disgusts me. But if a person had a living kid, and couldn’t afford to buy him or her any toys? Maybe that wouldn’t be so bad,

Plus, when the little bastard acts up, I can tell him where they came from, and that a ghost kid is looking to take them back if he doesn’t behave.

The police set up surveillance cameras which they wouldn’t have done if a law wasn’t being broken. There must be something specific in the law covering that.