My uncle is a veteran of the US Army-he served in n Africa, Italy, and Sardinia. I was over his house, and he mentioned something that always puzzled him…I’m hoping all of you can help me with this. In 1944, he was transferred into a new Unit (the 560th Signal Battalion), and his unit was placed under the command a of a Colonel Smith. His unit was then issued WINTER gear (including fur-lined boots and winter camping gear), and told to expect transfer to Russia! He was told that his unit would support something called"Mission 16", as part of something called “Operation Diadem”. Later, the officers told him that they were not going to Russia after all-they were told to expect transfer to Linz. Austria.
He told me that in all his reading, he was never able to find out what “Mission 16” was all about…anybody have a suggestion about how to research this?

I think “Operation Diadem” was the codename for the assault on the Hitler Line in Italy (like the Gustav line but further north) in spring '44.

Unless they reused Operation names it looks like his information might be off (having served 4 years myself, I am not surprised).

From Naples, the Americans headed north toward Minturno where they held a defensive position for about a month, Bammer recalls. They went on the offensive with “Operation Diadem,” the major push against the Gustav Line. The operation ultimately led to the liberation of Rome, the first Axis capital to fall.

Gen. Sir Harold R.L.G. Alexander, in overall command of the Allied ground forces in Italy, would later liken the assault on the Gustav Line to a “one-two punch.” The British 8th Army and the U.S. 5th Army (under which Bammer’s infantry division served) landed the first punch on the southern front. The 5th Army’s VI Corps followed up with the second punch - a left hook - from the Anzio beachhead to the northwest. 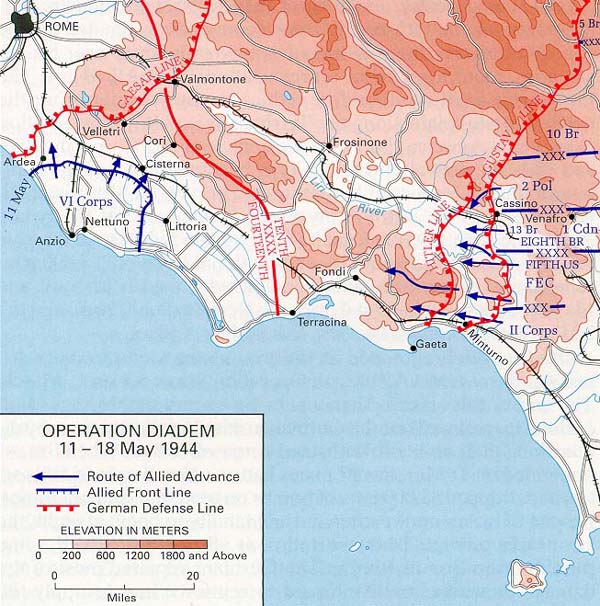 p.222: The objective of all this training was in fact to prepare the tank and infantry units for the projected attack on the Adolf Hitler Line (a position corresponding to the Gustav Line in the Liri Valley between the Gari and Melfa Rivers, encompassing the villages of Piedimonte, Aquino and Pontecorvo), codenamed operation DIADEM.

Thats the one! All coming back to me now.

I remember a large debate between us and a group of American students at the time over Matt Clarks “Left Hook”.

From my book, copyright me:

DIADEM (Allied 44) The 1944 Allied spring ground offensive in Italy launched on 12 May, 1944 to turn the German defenses at Cassino and open up the Liri Valley. The breakthrough was achieved by Free French and Moroccan troops on the 14th. This caused the German “Gustav Line” to collapse, reducing pressure on the Anzio beachhead (SHINGLE) and allowing a breakout from that encirclement (BUFFALO) . The Germans retreated northward to the new “Gothic Line.” DIADEM was roughly coordinated with the invasion of northern France (OVERLORD) and was supported by the air attacks of Operation STRANGLE. A diadem is a primitive royal crown. Followed DICKENS. Included HASTY.