Your favourite piece of original music from a film.

Mine has to be Deborah’s Theme from Once Upon A Time In America.
I find it so touching, so graceful, so damn beautiful. It’s guaranteed to start me blubbering. Here’s a performance of it- 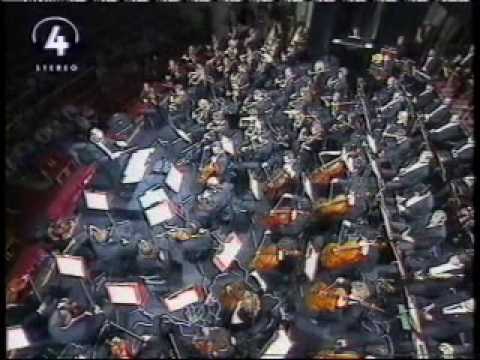 Singin’ in the Rain.

Either “Pippin’s Song” or “In Dreams” from the Lord of the Rings.

I’m a pushover for choirboys.

In the purely musical sense, I mean, of course.

Speaking of choirboys was that Welsh song in Empire Of The Sun original?
It was beautiful either way. I sang it or a close approximation of it for years afterwards.

So many tough choices…

For songs-with-lyrics, a song that is so good that it has become an overexposed cliche, but is still a lovely song, is Somewhere Over the Rainbow.

“Chinon/Eleanor’s Arrival” from The Lion in Winter (Barry)
“The Battle on the Ice” from Alexander Nevsky (Prokofiev)
“The Creation” from Bride of Frankenstein (Waxman)
The title song from Navajo Joe (Morricone)
“The Spring Sea” from The Ghost and Mrs. Muir (Herrmann)
“Something for Cat” from Breakfast at Tiffany’s (Mancini)
“The Asteroid Field” from The Empire Strikes Back (Williams)
“Julilet’s Theme” (and variations) from Juliet of the Spirits (Rota)
“Breakfast Machine” from Pee Wee’s Big Adventure (Elfman)
Main Theme from The Conversation (Shire)

Oh good, I get to mention the theme from "The Magnificent Seven" !!

Peter Gabriel’s Passion: Music from the Last Temptation of Christ.

Ditto on the theme from ‘The Magnificent Seven’ – it’s one of my favorite pieces of music, period.

Also noteworthy (heh!) is the theme from ‘The Molly Maguires’, written by Henry Mancini.

Goldfinger (composed by John Barry, lyrics by Anthony Newley and Leslie Bricusse, sung by Shirley Bassey) introduced and set the tone perfectly for the whole James Bond series of films with brassy, threatening, relentless portending of danger and evil. Complex, precise chords, orchestration and melody communicate without the need for words, but the lyrics (added secondarily) at least don’t hinder the music. Musical elements from the song, especially the introduction, appeared in the film’s score throughout, making it the theme of the movie as well.

“Gently, Johnny” from The Wicker Man.

and Cavatina, The Deer Hunter theme.

The Main titles of Star Trek II (Horner) and VI (Eidelman) are fantastic.

The Twilight Zone: The Movie (Goldsmith) is clever, creepy, and fun.

“Dueling Banjos” from Deliverance, composed and arranged by Lester Flatt and Earl Scruggs.

Burt Bacharach’s *Not Goin’ Home Anymore * from Butch Cassidy and the Sundance Kid. It was used a couple times, as I recall, first as they arrive in Bolivia and also as the end titles music.

“Struggling to Escape” by Don Davis (House On Haunted Hill) you can download a clip here.

There’s one I’ve never been able to identify that I really liked - it was in the TV teaser, not the 2.5 minute theatrical trailer, for Interview With The Vampire. It was towards the end of the spot when the laughing vampires come for Claudia and the woman. (also played during chapter 22 of the dvd).

“Light” from Hans Zimmer’s soundtrack to The Thin Red Line. (I believe it plays during the scene where the GIs raid the Japanese encampment on the top of the hill.) Gives me chills down the back of my neck whenever I listen to it.

Speaking of choirboys was that Welsh song in Empire Of The Sun original?
It was beautiful either way. I sang it or a close approximation of it for years afterwards.