16 months later I’ll finally admit it, I like the new SDMB forum SW

When did we make the change? I think it was at the end of December 2019. Is that right? At first I loathed the new software. Avoided it like covid. But it’s been slowly growing on me. And now finally I have to admit, I like it. 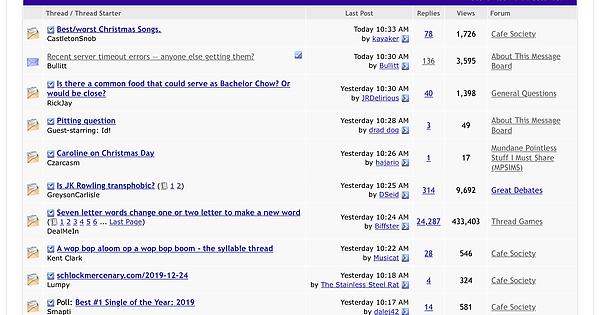 I just realized that covid-19 and the new forum SW arrived around the same time!

So, what was your forum software adoption experience like?

The cutover was in June of 2020. Overall I like Discourse and I got use to it pretty quick.

Of course I really like the fact that the Straight Dope is no longer falling apart at the seems like it was on the old software and database.

For the life of me, I still can’t figure out what SW means though. Please explain this one?

Yes, software. I guess that was too cryptic, sorry.

I figured, because SDMB South West is still in beta testing.

Discourse is the new software. Can someone remind me, what was the old?

vBulletin® An old and outdated version.

A very old version of vB, at that.

I do like how your screenshot captures the old board in its glory, with the thread on server timeout errors.

Regardless of how anyone feels about cosmetic issues, that alone was well worth the change.

vBulletin. Thanks. And I certainly don’t miss these, that’s for sure — 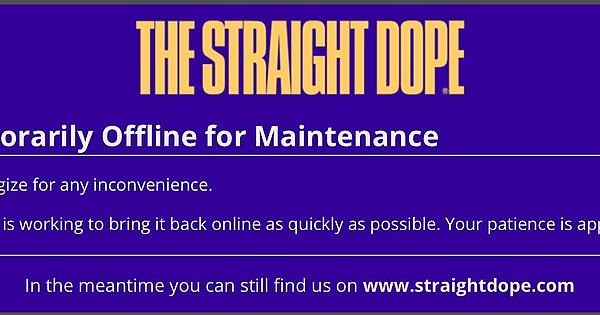 I like it but it’s still annoying when old links to threads don’t work (i.e. a post in an old thread is referring to another old thread, but now the link is broken). Are those ever going to be fixed?

I’m a moderator on a board that uses Xenforo, and overall I mildly prefer that to Discourse.

But overall Discourse is fine, except for infinite scrolling. I thought I’d probably get used to that, but I still find it clunky and unpleasant. Not a huge deal, though. Even with the loathsome infinite scrolling, the new SDMB is a vast improvement over the days when we were using a dreadfully out-of-date version of vBulletin.

I’ve liked it from the beginning, and now I like it even more. For the way I used vB, this is so much easier for me to keep track of threads, to see who replied to my posts, to be alerted when I’ve been tagged in a thread, etc., instead of running vanity searches, which I might not do for weeks at a time (when it came for searching mentions of my username, I’d often go months without searching, so if I was called out in a thread I was not participating in, I would not see it.) Overall, it’s just a much better user experience for me. I really can’t think of one thing I preferred on the old vB board. Plus I like that we can link to things with graphical previews, we can post pictures, etc. (I know some of that could have been and wasn’t for reasons enabled on the vB site.)

On the old vB it was easy to see, for a given thread, a ranking of the post counts by poster. Is that doable with Discourse? It probably is but I haven’t found it.

The Op has a little area that shows Created, Last Reply, replies, views, users, links and then the users.

If you click the down arrow it expands to show the posters and most popular links.

I had to do some adjusting. I doubt I’ll ever like as well as I liked vBulletin but as other folks have pointed out, we didn’t have the option of vBulletin in working order, we had a choice between vBulletin staggering around in terminal death throes mode or something else that could perform the basic functions of message board that wasn’t falling into unresponsiveness every other day.

The search capability is even worse, which is very frustrating because it was pretty awful under the old software. I was hoping for an improvement not a deterioration. But greater familiarity with how Discourse works has helped with even that. Instead of a single search for “New Posts”, have two saved URLs, one that apparently opens new threads and the other which opens “my posts”. I think I’m still missing some threads that have had new activity on them but it’s hard to be certain of that.

A feature I like in Xenforo, which may exist in Discourse and I just don’t know about it, is that you can see at a glance, among all the threads listed, whether you’ve posted in a thread. That’s nice for threads you haven’t thought about in a while.

Am I missing something with Discourse that should tell me whether I’ve posted in a thread?