In Christmas Vacation, Chevy Chase spends an entire night setting up outdoor Christmas decorations which don’t work as they have problems with the circuit breaker and the Griswolds are embarrassed in front of their neighbours and especially their guests.

In The Simpsons, Homer tries to set up an outdoor display but he’s humiliated by his meagre display when Flanders humble brags about his setup complete with a stereotypical electronic Santa saying, “Ho, Ho, Ho” in a 1970s robotic voice,

I’ve always felt the Simpsons was a take off of Christmas Vacation but that doesn’t seem possible. I didn’t watch either of these during the initial run, but saw them both a lot subsequently. Christmas Vacation was all over the pay TV stations for December 1990, I was visiting family without a car and thus watched a ton of TV during my college break. The Simpsons also exploded with popularity in 1990 and the limited number of episodes were repeated frequently.

I assume it has to be coincidence that there are similar scenes in both works. Outdoing the neighbours with Christmas decorations has probably been a thing since the 1970s if not earlier, so it is reasonable to expect it in a Christmas themed comedy,

There is a trope for that, but the examples all seem to be more recent. 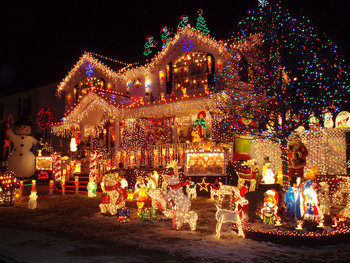 How to show that people feel really festive and are in the mood for some serious Christmas celebrating? Why, decorate their houses, of course, and apparently, more is better when it comes to decorating a household for Christmas in fictionland.

I’m guessing that the super-crazy ostentatious Xmas light displays became a thing right around then, and that’s both why they were on the Simpsons and skewered by Christmas Vacation as well.

My guess it’s just a bumbling but well-meaning dad thing.

Watching the scene from the Simpsons, I don’t really see that much in common with Vacation. The joke in Christmas Vacation is that he spends all setting up this giant display, and it doesn’t work. In the Simpsons the joke is that Homer just does a terrible job compared to Flanders.

… Homer just does a terrible job …

In The Simpsons, Homer tries to set up an outdoor display but he’s humiliated by his meagre display when Flanders humble brags about his setup complete with a stereotypical electronic Santa saying, “Ho, Ho, Ho” in a 1970s robotic voice,

There’s a similar setup mentioned in Ann M. Martin’s Welcome Back, Stacey!, a YA novel published in October 1989:

“That place gets worse at Christmastime,” she told me conspiratorially. “The owners outline the entire house - windows, doors, everything - with colored lights. They put a mechanical Santa on the chimney, and all day and all night he waves one arm back and forth and goes, ‘Ho-ho-ho. Ho-ho-ho.’ They set wooden carolers in the yard and elves on the front steps, and they shine a spotlight onto the roof where they put a Rudolph with a blinking red nose.”