The Henri David Ball is generally epic. It’s $25 entry with costume, $75 in normal clothes. You can get the cheaper admission wearing a storebought costume- but you don’t stand a chance of winning any category in the costume contest. UNTIL THIS YEAR!

The winner for Most Hysterical was a pair in storebought inflatable ‘caveman riding dinosaur’ costumes. Were they funny? a bit. Were they funnier than OTTOMH the ‘eat a bag of dicks’ costume with five-foot long home made foam rubber phalluses? No they definitely were not.

I, wearing my Cultist Of Cthulhu costume, hoped to win in the Most Horrifying category. Then, I saw that the Five Nights At Freddy’s bear costume was entering Most Horrifying. His date, an andrgynous person in painted body suit, pony heels and home made deer skull mask was also entering. Well, I said to myself, there’s no shame in being beaten by the best. Then, in a development I still cannot wrap my head around, the judges awarded Most Horrifying to a man in storebought coveralls, storebought crappy plastic knife, and storebought Michael Meyers mask. A pox on the judges! May alll their teeth fall out but one- and that one should have a legendary toothache!

Bumped because I found a photo of the costume that lost. Henri David 2022- The Loser - Album on Imgur

Now I’m inspired to do a ATHF Cybernetic Ghost of Christmas Past from the Future.

Another photo of the 5 Night’s At Freddy’s masterpiece this time with his date. I’m not sure exactly what the date’s costume is supposed to be. But it was fine and scary. Henri David 2022 More Losers - Album on Imgur

It seems to me that a costume contest award is for the creator of the costume, not for the person who happens to be wearing it. And, heck, that dinosaur costume was created by someone, and maybe that person does deserve an award of some sort for it, because they did good work.

But the person wearing it? What are they being rewarded for?

Now, that said, the coveralls guy isn’t in quite the same category as the caveman riding the dinosaur guy. An inflatable costume is a single, whole, integral thing. You’re either wearing it or you’re not, and if you’re wearing it, you’re in costume. The coveralls etc., though, might not have been: The person might have found the coveralls at a thrift store, had the plastic knife lying around already at home, and borrowed a hockey mask from a friend: All the pieces existed already, but they weren’t a costume until someone put them all together. It’s still probably not as deserving as the two you linked to, but it’s at least something.

and borrowed a hockey mask from a friend

Jason Voorhees wears a hockey mask. Michael Meyers wears a specific mask (the original is said to have been a Captain Kirk mask covered in white powder) easily bought at any Spirit Halloween. A hockey mask is indeed something you might have lying around. A Michael Meyers mask has no other use than to be worn as the killer from the Halloween films. And apparently, I’ve been spelling the last name wrong. Michael Myers (Halloween) - Wikipedia

A Michael Meyers mask has no other use than to be worn as the killer from the Halloween films.

It is pretty scary though.

There were supposed to be two Michael Myers and one Mike Myers but Universal wouldn’t let that happen. 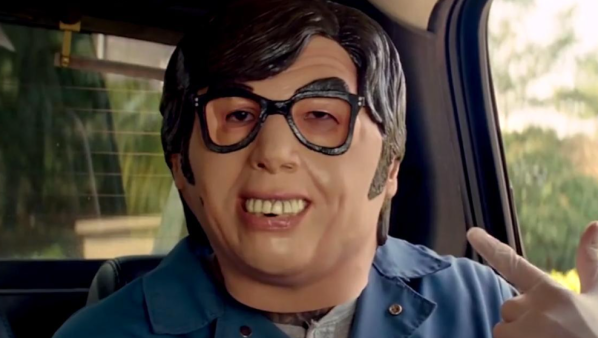 One of the best jokes in “Baby Driver” was originally much different.