A few months back, I saw the pictures of this prototype aircraft.

As I understand it, it’s difficult to make an aircraft like this maintain level flight because you control your orientation by changing the speed of the various propellers.

So, that night, I had a dream. Each engine would have a high power electric motor in series with the fuel burning engine. In order to keep the aircraft level, some motors would act like generators, and the current would flow to motors that act to increase the speed of the corresponding blade. There would be an ultracapacitor and a resistor bank for supplying surges of current or disposing of unwanted energy.

Pitch is controlled by increasing and decreasing the rpms of the front and back rotors causing a moment which causes the copter to pitch up or down.

Roll Same mechanism as pitch but using left and right rotors instead of front and rear.

All 3 of these critical maneuvers, you speed up 2 propellers (on a quadcopter) and slow down 2 others.

So this is a hybrid in the sense that you’re using electricity to distribute engine power more rapidly and as a source for huge changes in blade speed.

To keep the weight down, the motors might have to be superconducting.

In theory, this would still be simpler than the complex apparatus that helicopters use to govern blade pitch. Each engine module would be the engine, electric motor, power controller, and possibly a clutch. It would probably end up being an octacopter or more for some redundancy.

What do you do when an engine fails?

What do you do when an engine fails?

An octarotor configuration is still stable with a missing engine. Technically you can actually be missing an engine in a quadrotor configuration with really good software. And, with my scheme and a clutch, you can redirect power from the other 7 good engines to the electric motor driving the prop on the failed engine and get more lift that way. (as I understand it, helicopter lift is related to the momentum of the downwash, but the velocity of the downwash is v^2, so spinning all 8 rotors instead of 7, with the same engine power, gives you more lift.)

Assuming everything else was feasible you’d still have no autorotation ability in the case of engine or control system failure, and even if you could autorotate you have no other control capability. Essentially you are talking about a tilt-rotor system and those don’t work very well. Gyroscopic force will try to keep the rotors horizontal limiting the directional control.

Assuming everything else was feasible you’d still have no autorotation ability in the case of engine or control system failure, and even if you could autorotate you have no other control capability. Essentially you are talking about a tilt-rotor system and those don’t work very well. Gyroscopic force will try to keep the rotors horizontal limiting the directional control.

Umm, while I linked a picture of an aircraft where the rotors can tilt, I’m describing basically a hybrid quadcopter. Quadcopter rotors do not tilt and the engine mounts don’t tilt, either. Whole system is fixed, only control variable is the speeds of the motors.

You can prototype it, when someone discovers room-temperature superconductors…

You can prototype it, when someone discovers room-temperature superconductors…

Or use LN2. The vacuum insulation + coolant is a lot less than the mass you save from the motor wiring mass.

Umm, while I linked a picture of an aircraft where the rotors can tilt, I’m describing basically a hybrid quadcopter. Quadcopter rotors do not tilt and the engine mounts don’t tilt, either. Whole system is fixed, only control variable is the speeds of the motors.

Same principle, whether you tilt the rotors or the whole aircraft your rotors are trying to return the aircraft to a horizontal position if you tilt them. Cyclic pitch in a rotor does tilt the rotor disk somewhat from the horizontal, but mainly is changing the direction of the airflow aerodynamically through the changing pitch of the rotors.

Also you are short-changing the danger of a failure of one of the rotors. If you were in forward flight you’d have a sudden dip at one corner of the aircraft that could flip the craft over at a high enough speed, or even worse it could tear the aircraft apart. This is an extreme example of a quadcopter going bad.

A few months back, I saw the pictures of this prototype aircraft.

Your electrical speed control is a really interesting idea! And relatively simple! Kinda like the 2-engined race car! :eek: I think it could work.

Did you notice that on this vehicle that per side, the inner two engines are counter-rotating relative to the front and back engine? ie,

And the corner engines have at least 2 degrees of freedom.

So this is Black Night Transformer drone copter. Kewl! 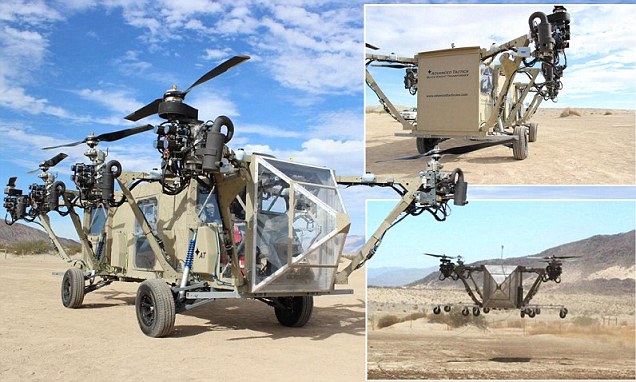 It utilizes the vertical take off and landing of a helicopter and couples it with the off-road driving capabilities of a truck - and is operated remotely. Meet Black Knight.

The small hobbyist multicopters work well because it’s easy to dynamically adjust the speed of the small rotors at a pretty high cycle rate. That enables fine control. And it’s easy to do that because the inertia of any given rotor and its powering motor is very small.

That doesn’t scale well due to the square / cube law. The prototype shown has relatively much heavier rotors & motors and as such can’t be as finely controlled.

At the current state of the art we’re not going to get much larger than that before control-by-blade-RPM becomes impractical.

As well there’s the inherent issue that a fixed pitch prop or rotor is maximally efficient at exactly one RPM. Any time you’re turning at a different RPM you’re giving up efficiency. If spinning too fast, you’d gain efficiency if you could increase pitch & reduce RPM. And vice versa.

Will there some day be multi-copters big enough to carry people? Probably. But several problems with power vs. weight in the power systems and aero efficiency in the blade systems need to be solved first. Odds are that mechanically-controlled changeable-pitch blades will remain part of the equation for a long time to come.

Ultimately those complex mechanical systems aren’t so complex that they’ve become game breakers. What’s complex is the other stuff you have to do instead to be able to leave out the changing pitch rotor systems.

The small hobbyist electric multi-copter is a really cool invention that’s exploiting some very real gains in battery & motor tech, plus sensors and stiff plastics for the blades. Right now the helo industry is struggling to scale all of these things up enough to get from 1lb useful load to 1 ton useful load to 100 tons useful load.

There definitely are efforts afoot to build hybrid propulsion for aircraft using IC, diesel, or turbines for baseline load and have that drive generator(s) which feed batteries and / or ultracapacitors which in turn drive electric motors to turn the propellers, ducted fans, lift fans, whatever.

Right now the end to end efficiencies aren’t there. Nor are the weights. See http://www.nasa.gov/content/experimental-wing-tests-electric-propulsion-technologies as an example.

One of the neat ideas is that if the propulsion system is heavier than our current state of the art, but it enables savings in structural weight elsewhere that may be enough to “pay the freight” and make the new system viable as a whole. At a meta-level, we’re fast approaching the era where the airframe and its powerplant are very tightly cuopled systems, as opposed to, say, WWII tech where various makes and models of engines were treated as more or less interchangeable plug-and-play units.

Here’s an example of deploying power plant tech as in the link above to build an airplane with a vastly smaller & lighter wing than would otherwise be possible. http://www.nasa.gov/content/experimental-wing-tests-electric-propulsion-technologies

I do like the idea of using electric motors as means of balancing load/power requirements for multi-engine craft. We may not be there yet but it has some potential in the future. The OPs idea may not be that far off if it uses rotors for vertical lift and propellers for horizontal flight such as the Eurocopter X3.