Several days ago a lizard (anole) was on my sliding glass door, and my dog was whining and scratching to get to it. I opened the door, thinking it would run off and the dog would shut up. Unfortunately, it ran into the house, and behind the big screen TV. I resigned myself to finding a mummified lizard one of these days.

So the other day, I took my big potted palm out to water it. Lo and behold, there was that little lizard, busily lapping up the water dripping down the plant stalks! I was amazed, and amused. Poor little thing was thirsty! I noticed he was missing his tail - maybe one of the dogs got to him while he was trapped in the house.

Yesterday I saw Stumpy again. He looked healthy, and was doing that thing that they do, puffing out his red throat, looking for a mate.

I’m glad he survived his incarceration.

(Was that too mundane and pointless? :D)

Well, the only humane thing to do is go out there, and find him a mate. He’s lonely. Pining for the fjords!

So, he got back out without anyone noticing? Makes you wonder if he’s got a secret lizard-door somewhere. Or, a revolving lizard door.

I got my toe caught in a revolving bank door once, when I was a kid. **

**(No, Dolores, yours was fine. This here is too mundane & pointless!)

My current apartment has a door that is a death trap for lizards. Every once in a while, I open the door and a squished anole falls out of the door frame.

Well, at least he wasn’t suicidal. My office building has an inner courtyard. It is pretty much infested with anoles because most of the herons and egrets that dine on the critters will avoid the closed in area. My theory is that the anole community regularly picks certain members to run under the feet of coworkers crossing the courtyard, thereby being squeeshed out of existence. How pointless is that?

Oh, yeah, and I have a mummy lizard in my faux ficus.

So, he got back out without anyone noticing?

He was on the potted plant I took outside. It’s right next to the TV.

Ah, memories of Florida, when we used to have frequent lizardy visitors to torment the doggies. Fortunately, my daughter was really good at catching them and returning them to the wild. I wasn’t quick enough, except the time one paused on a throw rug and I was able to wrap it and deliver it to the yard.

But I also found many a dessicated lizard in corners. Such is the Circle of Life…

Just after we moved into our new place, I opened the door to go out and a huge alligator lizard flopped down off the top of the door frame and onto the porch. He must have been a foot long. If I’d stepped out faster, he would have fallen on my head! Considering how fat he was he got himself off the porch and into the bushes pretty fast. I have no idea what he was doing on the door, and, unfortunately I haven’t seen him since. 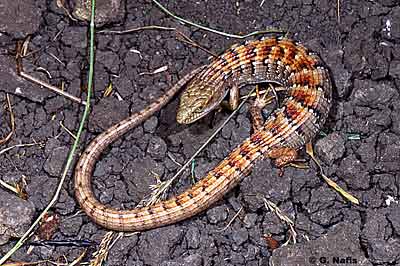 We had a five-lined skink on our porch over the weekend who’d lost part of his tail too. I blame the cats next door.

I’ve noticed no dessicated anole corpses since I started leaving water out for them. Sure, water is also important to cockroaches but I haven’t seen any roaches either since I have been leaving the water out, so Wiki might be right in that anoles eat insects. Now, if I had cats or dogs, I’d trap the anoles with dishware and take them outside.

Down here, at night you can always see a lizard a few inches away from any light fixture on the outside wall or ceiling. They know it attracts insects. But being territorial, there’s only ever one lizard near any particular light.

One night, I was in my living room when I hear a soft tapping on my door. It sounded like someone was stealthily playing with the door knocker. So I looked through the peep hole and saw nothing even though I could still hear the sound. So when I opened the door I found a big anole trapped under the knocker. He would have been able to get out easily except for the freaking huge cockroach that was halfway in his mouth. So I lifted the knocker and let him run off. Anyone reducing the roach population has a pass.

Now, if I had cats or dogs, I’d trap the anoles with dishware and take them outside.

Yeah, I did this the other day, and was so proud of myself for a job well done, until I lifted the lid to free the anole–only to see a writhing tail, and nothing else.

Either by feline (who brings them to the diningroom :rolleyes: ) or by themselves, they come in frequently, and I do have some measure of success in returning them to the wild. However, I too have come across a pathetic little corpse a couple of times.