I occasionally hear the most outlandish things from people about various common foods. I don’t believe any of them- most of them seem either batshit crazy, or something that would cost the manufacturer way more than any benefit they might derive.

[ul]
[li]Diet Coke really has the same number of calories as regular Coke, but Coca Cola just pays a fine to the government for mislabeling so they can keep selling it as a diet soda.[/li][li]Cadbury Creme Eggs are actually a hard candy center covered in chocolate, until they’re treated with enzymes to liquefy the fondant.[/li][li]Arby’s Roast Beef that they slice for the sandwiches comes to the stores in powder form, and one of the jobs that people do is to mix it up with water and boil it before they slice it up.[/li][li]Mass-produced beer has all sorts of additives in it- formadehyde being the most common purported preservative additive; usually claimed to be the cause of hangovers.[/li][/ul]

Also on this very board, I’ve heard that citrus fruit have enzymes that will tenderize any meat and that tough meat is a “myth”.

So what crazy things have you heard people claim about food? Doesn’t have to be false- it can be crazy and true if you like.

Also on this very board, I’ve heard that citrus fruit have enzymes that will tenderize any meat and that tough meat is a “myth”.

Pineapple does, did people say citrus?

ETA, I’m not saying that tough meat is a myth, just that pineapple contains a known meat tenderizer.

Methinks the candy thing is no myth-

How Is Invertase Used to Make Candy?

Invertase is an enzyme used in candy-making and helps make the liquid centers. Learn about this enzyme and why it's such a commonly used ingredient in candy.

Methinks it’s no biggie, either.

Mushrooms can’t be washed or soaked in water, 'cause they absorb water like a sponge. You have to wipe them one by one with a damp paper towel or an $18 mushroom brush.

Searing meat seals in the juices and gives you a juicier steak/stew meat.

High Fructose Corn Syrup is even worse for you than regular sugar, but honey/agave syrup are good for you.

Cook your beans without salt or tomatoes, because salt and acid will prevent the beans from absorbing water and softening.

Fruit juice is a nutritious beverage, and a good way to get a serving of fruit.

Raw and fresh vegetables are healthier than frozen and/or cooked vegetables.

MSG causes headaches and/or lots of people are allergic to MSG.

If your food is too salty, add a raw potato and simmer - it will absorb all the extra salt.

Kosher and halal meat are better quality than regular meat.

Methinks the candy thing is no myth-

What Is Invertase and How Is It Used?

Methinks it’s no biggie, either.

Huh… I had no idea! It sounded crazy to me.

That dairy foods cause massive amounts of mucus that can kill you.

I worked with a flake who claimed everyone is allergic to wheat and we should all stop eating bread. She’s the same flake who got all pissed off because her mother offered her 5-y/o son a banana - BANANAS ARE FULL OF SUGAR!!!11!!!1!!! :eek: She acted as if grammy was force-feeding pixie stix to the kid.

I know she had other inane food theories but I’ve managed to forget the rest. What really killed me were the women who came to her for dietary advice! :rolleyes:

Raw and fresh vegetables are healthier than frozen and/or cooked vegetables.

This one get a solid “it depends”. From here:

Fact: It depends on the vegetable. “Cooking destroys some nutrients, but it releases others,” says Marion Nestle, author of What to Eat. It destroys vitamin C and folic acid, according to Nestle, which is why it’s not a great idea to cook oranges.

On the other hand, she says, cooking releases vitamin A and the nutrients in fiber and makes them easier to digest. It’s also easier for your body to absorb more lycopene, a cancer-fighting antioxidant, in cooked tomato sauce than from raw tomatoes.

Steam or roast veggies instead of boiling, which leaches out water-soluble vitamins into the cooking water.

I once worked with a woman who claimed she had “multiple chemical sensitivity.” She claimed that the smell of some food made her so sick she had to go home. I was once eating a candy bar and drinking coffee. It made her sick. I was once drinking a cup of something and she claimed “your coffee is making me sick.” When I pointed out it was tea, she asked if there was anything in it. “Yeah, some sweetner.” “Oh, that stuff makes me so sick. I have a headache. I have to leave.”

She did not work in the office for very long.

Myths:
High Fructose Corn Syrup is even worse for you than regular sugar, but honey/agave syrup are good for you. 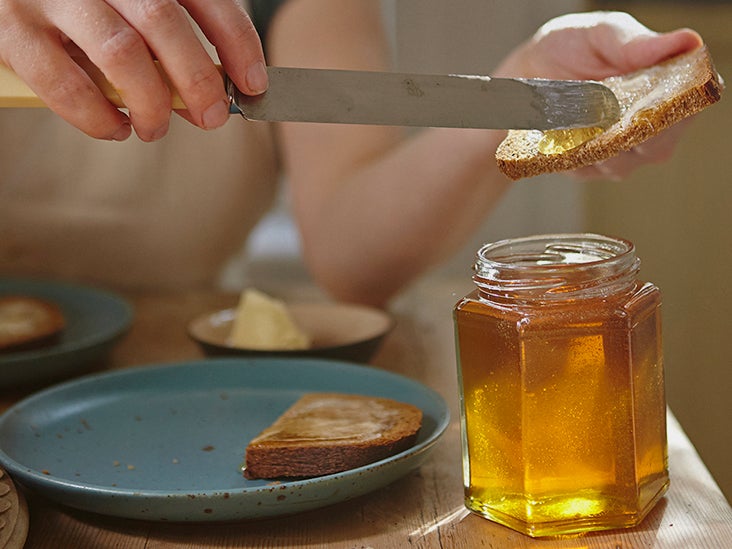 Research indicates that honey may combat infections, help wounds heal, and ease nighttime coughs. Learn more about its uses and some risks to consider.

Manuka honey from New Zealand is touted as having antibacterial properties. We discuss the possible medicinal uses of manuka honey.

This one get a solid “it depends”. From here:

Oranges are a veggie now? Damn, I just can’t keep up.

We’re treating wounds in the kitchen now? Damn, I just can’t keep up.

The first cite says nothing about honey as a food. The only thing the second cite has to say about culinary use of honey is, on page 3: "Even if honey is natural, it is no better than ordinary white or brown sugar for dieters or people with diabetes, says dietitian Toby Smithson, RD, CDE, a spokesperson for the American Dietetic Association and founder of the web site, Diabetes Everyday.

A tablespoon of honey, in fact, has more carbohydrates and calories than granulated white or brown sugar."

I am very well versed in the *medicinal *virtues of honey. But from a *culinary *standpoint, it is not realistically healthier than sugar or HFCS. It has trace levels of some vitamins and minerals, but none that most of us are deficient in, and not at levels that are useful for meeting the USRDA for anything.

That’s how it works in theory. In reality, you would need to add 230 grams of table salt to a liter of water just to raise the boiling point by 2° C. That is 58 grams per half degree Celsius for each liter or kilogram of water. That is much more salt than anyone would care to have in their food.

Add salt for flavor, if you like, but it will not increase the cooking time a measurable amount in a household kitchen.

Typical salt concentrations used in cooking elevate the boiling point by a vanishingly small amount, as in less than a degree.

What about the one where you have 20 lbs of rotting meat sitting in your gut?

Or that chewing gum you swallowed as a kid has not digested and is still sitting there?

Or washing down a pack of pop-rocks with a coke will make your stomach explode?

Or that asparagus makes your pee smell like asparagus? Ok, that one is true, but not for everyone (it’s genetic).

Cook your beans without salt or tomatoes, because salt and acid will prevent the beans from absorbing water and softening.

Cooks Illustrated tested this. The first part is a myth - the second part is true. It’s age and acid that prevent beans from getting soft, not salt.

Cut onions are poisonous. As witnessed by the piles of dead bodies surrounding salad bars.

Cooks Illustrated tested this. The first part is a myth - the second part is true. It’s age and acid that prevent beans from getting soft, not salt.

Cook’s Illustrated says that as long as your overall pH is 5 or higher, your beans will soften.

They’re not? You could have fooled me.

Kosher and halal meat are better quality than regular meat.

But the animals are not allowed to be raised in the same kind of factory farm. At least that is what I always heard.

Wheat certainly does cause problems in some people. And milk.

Here’s one that is propagated by the aforementioned Marian Nestle: All calories have the same effect on weight gain. Research is showing that carbs are more readily turned into body fat than even fat. It must be that some fat is not absorbed and therefore excreted.