OMG, my baby asked a girl to the 8th grade formal and she said yes! This is the first I’ve heard of him even talking to a girl!

We don’t have many dress up occasions, we’ve always gotten by with dress shirt and pants, but I think we’re going to have to actually buy a suit.

He’s about 5’4" definitely going to do some more growing in the next few years. He’s got two younger brothers so this suit will see more duty, thank goodness.

So moms who’ve done this and men who buy suits, how can I get the most bang for my buck? Is there a way to have the pants hemmed so they can be let down when he gets a few inches? Will that work for sleeves too?

Should I go someplace like Sears or one of those suit warehouse places? I’ll ask my husband, but he has exactly one suit and I think his mom bought it for him from Sam’s Club.

I believe Sears is now off the rack, in other words they won’t tailor it, it either fits or it doesn’t.

How much can you spend? You can get a decent suit for a teenager at a Men’s Warehouse kind of place and you can have them tailor it and tell them you’ll want to let out the pants and jacket in the future. It’s much easier to let out pants than a jacket though, if he grows in the shoulders that gonna be a problem. This can reasonably be done a limited number of times so I wouldn’t plan on having it done over and over for several kids.

If you do want to get as much use as possible look for something classic.

Well, I haven’t bought any suits yet, but as a fellow mom, I just wanted to say Awwwww!

My husband usually goes to Men’s Wearhouse for his suits and gets them tailored there also. I would think they could allow for future growth.

Well, I’m no fashion plate, but I have been a rapidly-growing 8th grader at one point. My advice is to avoid a full suit, and instead get just a sportscoat, along with some slacks, dress shirt and tie. Get the jacket sleeves and shoulders a little big (as much as possible without looking too bad on him now), and he may be able to use the jacket for a couple years and might be able to hand it down. Plus you can pick up pants nearly anywhere.

I just think the jacket and slacks will be a little more versatile than a suit in the near term, and you might be able to still use the jacket even if he (or younger bro later on) doesn’t fit the pants any more. Plus – and of course I know nothing of current 8th grade fashion – a suit might look a little too banker-like for an 8th grader, whereas a jacket and tie is a little more relaxed, while still being formal enough to be classy.

Dad here. I agree with Qercus. I have a 9th-grade boy and when he was in 8th grade I got him a blue blazer with gray slacks and a white shirt for this kind of thing.

At that age they’re usually not big enough to wear men’s sizes and I found it hard to find suits in his size. One good source might be if you find a place that caters to kids that have to wear uniforms to private school. Haven’t tried Sears, might be a good choice. I got his at Macy’s. Before that I got his dressier clothes at a local chain called Syms, but they have gone out of business. I haven’t tried Men’s Wearhouse; don’t know if they have boys’ sizes. I know that Jos. A. Banks does not.

We basted the pants cuffs and he grew taller without getting bigger around the waist so we got a little more use out of the pants when we let them back down.

You can’t do exactly the same thing with shirt sleeves but there is a little trick you can do. Roll the cuff back and then button it so it looks like French cuffs.

Get him one of these. 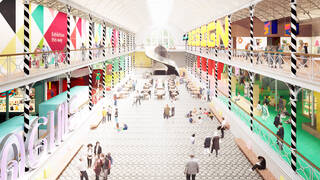 Welcome to Young V&A – a national museum dedicated to young people, from early years to teens – a space to imagine, play and design.

Does your son have an opinion on the subject? I know that in 8th grade I had a much better notion than my mom about what to wear and where to get it. (Not saying that’s true here, of course, just curious on his thoughts.)

Get your son an oversized tuxedo. They’re made to be tailored, and he’ll get a lot of use out of it before he’s done high school. You can buy them and have them tailored right from the tuxedo rental shop, and if you don’t mind a used one you can save some money.

My son (12) wanted a suit very badly. He likes looking sharp. We bought him one at Burlington Coat Factory. It was around $100. It fit him well enough that we didn’t need to tailor it.

We actually bought it because we were attending his great-grandfather’s funeral, and I was a little worried he wouldn’t get much wear out of it, but he wanted it so badly we got it anyway. Unfortunately, after that funeral, we’ve been very unlucky and lost about 5 other family members in a row. So, between that and his band performances and stuff, he’s worn it quite a bit, and I’m glad we sprung for it. However, I hope your son doesn’t have so many funerals to attend.

I was very pleased with the selection at Burlington though, and I would recommend it.

Not a costume party? He’d look great as an imperial storm trooper.

You might want to check with his friends’ moms. At my school, many parents don’t want to spring for a suit for a still-growing seventh or eighth-grader, and the boys go in nice sweaters and dress pants. In one of the high schools close to me even freshman and sophomore boys do that for homecoming, but not prom.

It’s a good idea to check with other parents. You might also see if the school has any suggestions. I know that my school strongly discourages parents from spending a lot of money of formal clothing. We suggest that kids wear something that might be appropriate for church or another somewhat formal occasion, but not tuxes or floor-length gowns. In our area, slacks and a jacket would be just perfect.

Rent. A suit that fits today will probably not fit next year, because it’s not just the length, it’s the cut.

… At my school, many parents don’t want to spring for a suit for a still-growing seventh or eighth-grader…

This. I don’t think I owned a suit until I was about 21. The reason was that I was still growing, and a suit wouldn’t necessarily change, while I did.

That being said, it is entirely possible for a seventh- or eighth-grader to look good. A pair of slacks and a sport coat, together with a nice shirt and tie, can look great on a young man of that age. And if he shoots up suddenly, you only need buy a new pair of pants. Later, he may fill out a bit on his body, so a new shirt and coat may be necessary. Or it may not. Either way, you haven’t paid for a full suit that only fits him for six months or so.

If you do buy a suit, I would suggest some variation on the solid black. I teach high school, and so see lots of boys in suits for various occasions, and 90% of them have a solid black cheap suit. I always think the odd charcoal gray or pinstripe looks nice as a contrast.

Another vote for a sport coat and dress pants.

pockets, inside and out.

based on his opinion and style don’t neglect resale stores. he may want an older style just to be unique.

This is the case in our house exactly right down to the bow tie - but minus the sister’s wedding. My son was two when my sister got married and people were still tripping over themselves to buy him adorable clothes. (including a Fauntleroy suit that my mother insisted on buying but only for the purpose of shooting one roll of film.)

I shake my head at the idea that that is considered formal, but then I reason through that it is as much more formal than what he wears to school as the suits and dresses at our dances were compared to our everyday clothes.

I do second the resale shop idea. That is where we get all his dress shoes. His feet have slowed down this year but last school year he changed sizes three times.

It will look cute as shit. Please, don’t discourage the adorableness!!