Been watching from the beginning. My (brief) summary so far:

Reps start out with a 10 minute campaign ad proving nothing.

I won’t go into the farce of the Republicans’ questions, because they didn’t raise any of any import. They did however on occasion let Barr answer the questions that the Democrats asked, but wouldn’t allow Barr to answer. For example:

Rep. Cohen yells at him for 5 minutes and doesn’t allow him to say a single word.

Rep. Hank Johnson asks him a question, he tries to answer, and Johnson speaks over him to say “I know you don’t want to answer”.

Rep. Jackson keeps trying to shut him up when tries to answer, saying she only has a short amount of time. How about this then: ask a simple question and allow him to answer, instead of making a speech.

They are now on a break. Maybe someone can get this message to the Dems: ask Barr pertinent questions, let him answer, and he may either hang himself on his own words, or give reasonable answers. Then maybe we can get to the bottom of things. But as for now, this is a farce, just the way the Clinton Benghazi hearings were.

The Democrats should be better than this.

I just tuned in, and I’m currently watching Cedric Richmond (D-LA) and he’s being quite polite.

When Barr answers, I am reminded of an abusive husband responding to his beaten wife’s complaints. “Look what you made me do!”

Been watching some more. It’s not getting any better. Now, I am not naive, and I am well aware that for at least the last twenty years that I’ve been paying attention to these hearings, that they are political in nature and in the end not interested in letting the witnesses actually get a word in edgewise. I just hoped that the Democrats would try to put and end to this trend, for at least a bit.

One thing that I don’t remember, is the phrase that they are all using, “I reclaim my time.” Is this new, or commonly used? Seems like it’s just a way of saying, let me pretend that I’m going to ask you a question that you can answer, and when you start to do so, I can just cut you off.

One thing that I don’t remember, is the phrase that they are all using, “I reclaim my time.” Is this new, or commonly used? Seems like it’s just a way of saying, let me pretend that I’m going to ask you a question that you can answer, and when you start to do so, I can just cut you off.

It’s part of house procedure. The members are “allotted” so much time by the floor manager, but they may yield that time to others. Saying “I reclaim my time” is formally cutting off the other person, who was borrowing your time anyways.

So far, this is the most hostile (on both sides) House hearing I can remember. It will be interesting to see which way the inevitable Trump Tweetstorm to follow goes: yell in all caps about unfairness or underbus throwing?

In all fairness, a considerable number of questions asked by the Dems were of the “yes or no” variety, and again and again, Barr attempted to digress.

With that said, I do think the Dems have somewhat overplayed their hand. I too would prefer to see Barr given more of chance to hang himself (figuratively speaking) by his own testimony.

And with THAT said, the Republicans seem totally oblivious to popular sentiment regarding the BLM protests. They are coming off very much as though they would be perfectly happy to see protesters machine-gunned in the street.

But I see the representatives not saying this to other House members, but to Barr himself. I’ve certainly seen reps cut off witnesses and try to get them to answer, or give a different answer, but not like this, where they ask a question and almost immediately say that phrase, as if to say, why are you answering me, when I have so much more shit to say?!

You may find more examples of this behavior in the Kavanaugh hearings, or infamously, with Rep. Maxine Waters and Secretary Mnuchin. 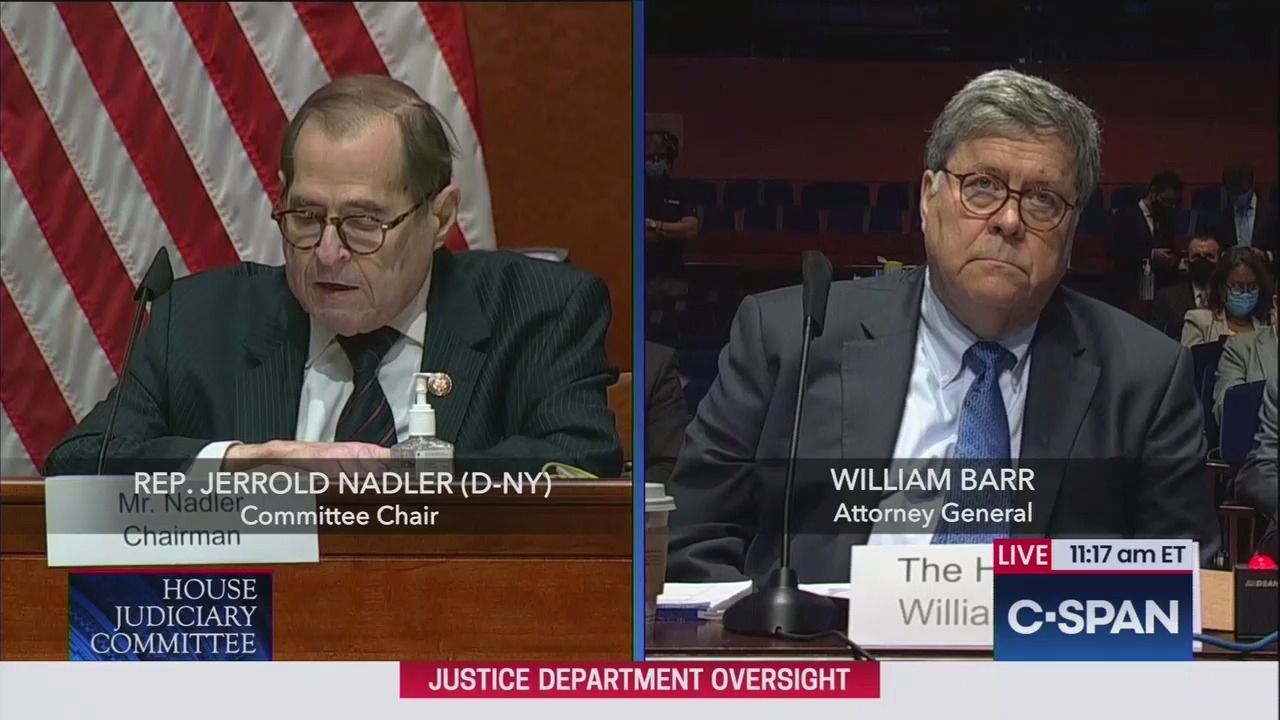 "Your tenure is marked by a persistent war against the Department’s professional core..."

Let me just say that no punches were held. As for yes or no questions, true, but I usually think they are bullshit anyway, because they are usually phrased in such a way that either answer can seem damning, so as general rule I think witnesses should be allowed to answer fully. Agreed on the hang himself strategy, as I stated. As it is, they come off as not being completely sure that Barr is in the wrong, because they just want to present their arguments without giving him a chance to explain anything.

This is all about getting a few quotes and clips that can be used later to land political hits. The chances of some giant bombshell are vanishingly small. With that in mind, I think it’s been worth it - we’ve already gotten Barr admitting he’s discussed the upcoming election with the president and hemming and hawing about foreign assistance for elections, and probably more that I haven’t seen yet (I haven’t watched the whole thing).

Well, again, I don’t recall that they ever yielded to the witness and then immediately reclaimed their time, because that is a patently obvious bullshit technique. Why does one have to yield to the witness officially? Is it no longer implied that asking, and then stopping talking, means you yield?

But if you say this is the norm, then you have answered my original point.

They don’t have to formally say, I yield to the witness. That is implied by just finishing the question. They do have to formally reclaim their time, or say something to that effect. When you call someone to Congress, ask a non-rhetorical question, and stop talking, it is not usually implied that you don’t want an answer.

ETA: At the end of the session, each side usually pools their remaining time (from individual representatives reclaiming time or yielding back) for the party leader to use.

I have long given up the notion that the House or Senate sets up fair rules of engagement during hearings because they really just want the truth, and therefore I will be happy for whatever come out of this that harms Trump’s chances in November. But I thought it was wrong when the Republicans did it to Hillary, and I think it’s wrong now. Since Trump is faltering greatly, I don’t think we need all that much help. But imagine a future situation, where everything is not so cut and dried, and we really need to hear from a witness to decide what’s best for the country. This, and the long, sordid past of bullshit hearings won’t help then.

ETA: At the end of the session, each side usually pools their remaining time (from individual representatives reclaiming time or yielding back) for the party leader to use.

Not to beat this into the ground much more than I have already, but this is what I am used to and fully cognizant of. That’s why the phrase “reclaim my time” struck me when I first heard it addressed to Barr. Would you say it’s equally common to use it either way, because I wouldn’t, but then my memory is going…

ETA: You may be interested in reading this CRS paper on time procedure in the House.

Pointless nonsense. Barr has to do whatever Trump wants him to so he gets a pardon.

Barr has to do whatever Trump wants him to so he gets a pardon.

Ah, but if I heard correctly, during the hearing Barr said, more than once, that Trump has never told him to do anything.

I agree with most of this - it’s a dirty system. But in order to correct it, first we have to win inside it.

You may be interested in reading this CRS paper on time procedure in the House.

Absolutely. I have a root canal scheduled for next Tuesday. I’m sure it’ll numb my brain and help me forget the pain.