All Tricks, No Treats (October Mini-Rants)

Continuing the discussion from The September of my Rants:

It’s still September 30 where I live but on the west side of the Pacific Ocean it’s October 1 so I guess this counts.

I live in the Pacific Northwest and especially with the bad wild fires this year some rain is nice. But did it all have to come at once? Ugh. And you’d think nobody has ever driven in rain around here before.

I’m glad you folks are finally getting some rain. Folks here in Arizona forget how to drive in rain every year too. I’m glad I’m retired and don’t have to drive during the first few days of bad weather. By the time I feel like leaving, most of the careless driving accidents have already happened.

Our 17 year old male cat peed out of the box today. He has NEVER had an accident before, so off he went to the vet. 500 dollars later and no sign of anything wrong. Blood work, urine work, lots of touching in inappropriate places, everything. The little jerk might be having an issue with bladder control or he might have had a senior moment, no way to tell because he can’t talk.

Oh, and I once thought the cat was peeing on the kitchen floor. It turned out to be the fridge.

Considering the attitude he gets at times, we are both probably very lucky I can’t understand what he’s saying to me.

The puddle was definitely urine and happened in an room with no water source. We both looked for reasons to think that our old guy didn’t do it, but couldn’t find any.

Oh, and I once thought the cat was peeing on the kitchen floor. It turned out to be the fridge.

I assume from the confident tone of this pronouncement, following on the tail end, as it were, of the preceding announcement about cats possessing a linguistically expressive spoken language, that the cat told you this himself.

I may be a Dog Person myself, but I know cats, and trust me, without independent corroboration from a trustworthy refrigeration mechanic I would not rule out the strong possibility that this speaking cat was merely deflecting blame for his own misdeeds. As the old expression goes, a speaking cat is a lying cat. If that’s not actually an old expression, it oughtta be.

A short documentary on bridging the communication gap: 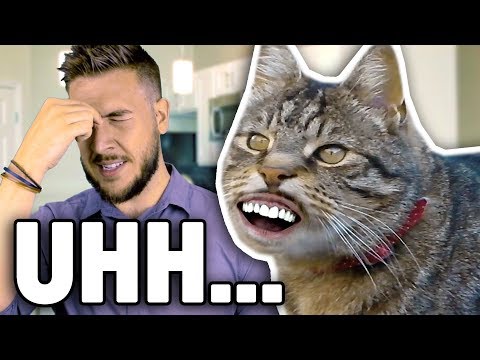 So, yesterday I went to a pain clinic to get treated for my sciatica. Except it was just a consultation. And it involved hubby and I sitting in a waiting room for over an hour and over an hour in a room.

After chit chatting with the doctor I now have a date to get a steroid shot in between my L5 and SI.

2 and a half weeks from now.

I am so sick of my ass hurting.

Holy shit, is their goal to put you in so much pain that the pain receptors short out and you can no longer feel it?

The month is off to a great start. I was scheduled to have a massage today, rescheduled from yesterday because when I had initially scheduled it I had forgotten that I was supposed to go to the dentist for a cleaning. So I get to Massage Envy early and just as my appointment time is coming up one of the staff comes in and tells me that there’s been a gas leak detected and they needed to evacuate the building.

So I decide to pop into the nearby Trader Joes and pick up a few things. When I’m done, I walk to the bus stop just in time to wave to the bus as it goes by. According to my NextBus app, the next bus isn’t due for an hour. Since it’s about a twenty minute walk home from there, I figure I might as well walk. Of course, my knee is not happy with this decision, especially because I’m toting a bag of groceries.

Another tranquil evening here in semi-rural Kentucky…at least, until the parade of emergency vehicles past our house.

We live on a two-lane road that’s one of a couple of east-west routes out of town so we’re used to occasional county fire/rescue traffic, but they outdid themselves tonight.

First there was the obligatory hook-and-ladder and EMT transport, then a succession of vehicles the likes of which I’ve never seen before, at several minute intervals. There was something that looked like an oversized Econoline van and a pickup truck (both painted red, sirens blaring). The most useless-appearing apparatus, a small nondescript truck, not only had its siren going but also had someone blasting the horn (BRAW-OWNNNK! BRAW-OWNNNK!) every few seconds, despite the fact that there was no traffic to warn out of the way. Probably someone’s father-in-law was visiting the firehouse when the call came in, and he begged to be allowed to ride along and honk the horn ('can I, pleeeze?" grumble, grumble).

Something about this procession was oddly familiar and then it struck me - it was almost exactly like the scene in Airplane! where a parade of odd and inappropriate emergency vehicles races onto the tarmac.

I think they must have emptied the county garage of anything that would roll.

I’ll have to tune in to local news to find out what happened, assuming it was a big enough deal to make the regional roundup, and not just a big fight at the Hatfield family reunion after two drunks grabbed for the last bottle of beer.

Thankfully, the shot appt. is supposed to be done in 15 minutes.

Today we went and picked up our daughter from college. An hour there, sitting around waiting for her to get back to her dorm and load up and then the hour ride back home. My butt hurts. And I get to look forward to driving her back on Mon. by myself. But getting to see her is worth the pain!

I got the shingles shots last year. No lumps or swelling, but my arm hurt A LOT for about a week after each shot.

Swell. I got Shingrix earlier this week and my arm still hurts. I got a flu shot in the other arm the same day and it’s fine. Scheduled for my COVID booster today - guess which arm gets it - go ahead - guess!

As for stupid drivers and weather, while we don’t typically get a whole lot of snow here in the DC-Merrylande-Virginia area, it’s not all that rare an occurrence. But just wait - when the first few eensy-weensy flakes appear, people will go bat-crap crazy! So glad I’m retired and no longer required to commute with the whackos.

You can also get injections in the top of your thigh if you’d like to avoid re-using your arm.

Our driveway was resurfaced Friday, and they installed a yellow tape to keep cars off it for a few days. Of course, during the night some asshole came by and removed the tape.

Driving to the grocery store this afternoon, I nearly ran over a dog that ran out in the road in front of me. So, a hearty “fuck you” to idiots who let their dogs run loose.

But did it all have to come at once?

I can’t complain all that much. In the last eight days or so of September, Eugene recouped its rain deficit for all of July, August, and September with a fair amount left over. It’s sure been a dry summer!

I came in here to rant about slow vehicles on two-lane country highways that don’t let you pass them. Oh, they go through the motions. Oh, they like to pretend. When we get to a passing lane, they stay on the right…and drive about three miles an hour slower than everyone else. You can’t get around them unless you absolutely floor it, and if you’re the last of several drivers who want to pass the slow vehicle, there’s not enough distance before the end of the passing lane. Sometimes it almost seems like they speed up a little bit when they’re in the non-passing lane.

Just today I was stuck behind a sedan towing both a camping trailer and a horse trailer, for about twenty miles. I finally got around it just before I reached Oakridge, where I had intended to stop for some coffee or soda. But I knew that if I stopped, I’d be stuck behind those trailers once again.

What a horrid weekend. Last Wednesday my gf drove to “say goodbye” to her auntie, who has been in a nursing home for the last few months. On arrival gf was told there had been a COVID case and visitation was suspended.

The following day (Thursday) she gets a call from the nursing home that she indeed can visit, specifically to “say goodbye”. So gf drives 90 minutes, pops in masked, spends a few minutes, and comes home.

Friday night we find out auntie had her weekly COVID test and was positive (fully vaccinated and not symptomatic). My gf begins quarantining herself. I’ve moved into the guest bedroom. I’m doing all the cooking, serving her in the dining room, while I eat in the sunroom.

Saturday morning we get a call from relatives, and are told auntie has died. We continue living in the same house, but have avoided being in the same room. Masks are the rule.

Holy smokes… I’m so very sorry for your loss!