For those who don’t remember the exact circumstances of the first Tyson-Holyfield fight, 538.com reminds us today in an article about McGregor-Mayweather, that Holyfield was considered washed up and was a HUGE underdog heading into that fight. 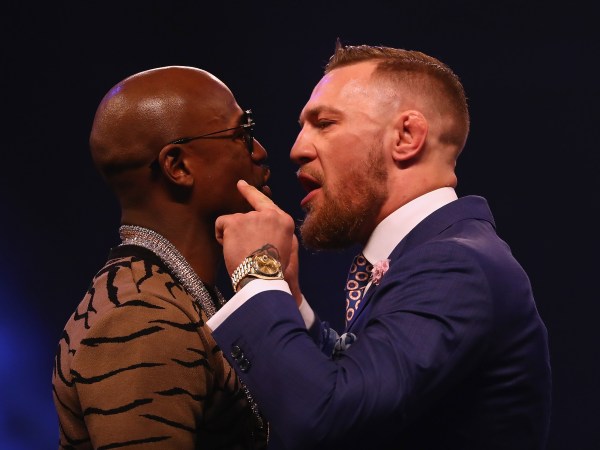 Mayweather. McGregor. What’s The Worst That Could Happen?

Boxing has a long history with bizarre endings.

Personally, I say all four scenarios end in Holyfield knocking Tyson out. Some boxers just don’t match up well with others, and Holyfield was just not the kind of opponent Tyson was used to fighting. Tyson’s fights, assuming they were actual fights, tended to involve him following a larger opponent around the ring while the bigger guy tried vainly to keep him at arms length, while Tyson was landing brutal body combinations. Holyfield, used to fighting cruiserweights, was used to taking on guys his own size and who didn’t fear his power so much that they fought while retreating. The first thing I noticed watching Tyson-Holyfield was that Holyfield stood with Tyson and traded punches. Even at his best, Tyson was hittable, and Tyson past round 6 was not nearly as fearsome as Tyson in rounds 1-6.

Tyson’s best chance of winning would have been when he was at his best, obviously. Maybe his combinations would have been too much for Holyfield. Maybe more head movement would have meant getting hit less which would have kept him in the fight longer(he says he checked out in that first fight after about the 5th round). That 1990 fight could have been epic, up there with Ali-Frazier.

Thoughts? Was Tyson at his best just invincible and only Tyson could beat Tyson?

I agree that Holyfield would have won no matter the circumstances. He was a much better boxer than Tyson. He played Tyson in the ring. Tyson had such a big punch that he never would have developed his boxing skills in a way that would give him an edge over Holyfield. In either of their fights Tyson might have connected with a punch that would turn things around, he had some chance of winning, but the odds would still favor Holyfield.

I don’t know who would have won. I suspect Tyson, but that’s not a very informed judgment.

But I agree with what I think is the general applicable premise. Which is that you can have someone with an extremely formidable tactic, which dominates all who encounter it and make that person seem unbeatable. But if he meets someone who has a way around it, and has to fall back on other attributes, then he can be much more beatable.

A recent example of this would be Ronda Rousey. Possibly Forman-Ali would fall into this category (extreme punching power but limited stamina met up with extraordinary chin).

If Cus D’Amato hadn’t died, Tyson would have won.

Tyson stopped developing as a fighter. Before, he would try to set up his knockouts. After, he just charged forward and depending on a big bomb. It worked for lesser fighters, but first against Douglas and later against Holyfield, who were utterly determined and had a plan, he fell short.

The key to beating Tyson was to stand up to him for the early rounds, move him backwards, and wait for him to run out of ideas. In Tyson’s all-too-short prime, you couldn’t stand up to him, because he knew how to move his head and feint and vary his punches. Later, he just wanted to get this over with, and a top-notch fighter, like Douglas was for that one night, or Holyfield was a lot more often, could out-last him and then catch him in the later rounds.

In the dictionary, next to the word “over-achiever” there is a picture of Holyfield, so he always has a chance. And he brought his punch with him as he rose from light-heavy to cruiserweight to legitimate heavyweight. That right counter he blasted Tyson with in their first fight would have split a tree. But he was ready for Tyson’s rushes, phenomenally well-conditioned, and ferociously determined enough to stand up under the early barrage.

Holyfield won both his fights with Tyson for the same reason - Tyson couldn’t knock him out early, and couldn’t think of anything else to do, besides (in the first fight) bomb away and hope to get lucky, and (in the second) try to find a way to get out of the fight without being humiliated again.

If Cus D’Amato hadn’t died, Tyson would have won.

That goes far back in Mike’s career. If Cus could have kept him training and under control in his personal life things may have turned out differently. That doesn’t mean Tyson was a guaranteed winner, they would have met earlier, Holyfield wouldn’t have been the full-fledged heavyweight he was when they did finally meet, but if Holyfield tried to duke it out with Tyson the same way he did with Riddick Bowe the result might have been the same. That’s assuming Tyson developed some stamina in addition to maturing as a boxer.

Even Tyson’s stamina was solid when Kevin Rooney was in his corner. He was no longer a knockout threat after the 6th round, but he still boxed competently when he had to settle for a decision.

Tyson took on almost everyone when he first won the title. The top ten heavyweights at the time weren’t much to speak of, has beens and never wases. Then Tyson was out of the game right when that new crop of contenders emerged. But definitely give credit to Holyfield, I don’t recall him ducking anyone.

Tyson took on almost everyone when he first won the title. The top ten heavyweights at the time weren’t much to speak of, has beens and never wases. Then Tyson was out of the game right when that new crop of contenders emerged. But definitely give credit to Holyfield, I don’t recall him ducking anyone.

Tyson could have fought Bowe, Foreman, or Lewis earlier on but for some reason ended up messing around with Razor Ruddock and a couple of fighter WAY below his level in Tillman and Stewart. His career between Douglas and serving time didn’t really seem to be going anywhere. It didn’t look like he was really working towards getting his titles back, whereas when he left prison he embarked on that project right away. When no one special held any of the titles.

Although that’s probably not Tyson’s fault. The big boys didn’t really want Tyson unless it was a title fight. Whereas Ruddock had an opportunity to raise his profile that Lewis, Bowe, and Foreman didn’t need.

That goes far back in Mike’s career. If Cus could have kept him training and under control in his personal life things may have turned out differently.

Especially his personal life. Once Cus was gone, Jimmy Jacobs was the only person in Tyson’s life who gave a damn about anything but exploiting him.

Cus was paranoid - he believed everyone was out to get him, and Tyson. Trouble is he was right. Once there was no one to keep Tyson focused, Don King and Robin Givens and everyone else moved in to suck his brain and his bank account dry. And Tyson was lost, and started to believe that he didn’t need to earn anything - just take it, in the ring and then with the rape.

Douglas almost doesn’t count as a major heavyweight, except for the one night he beat Tyson. Tyson thought it was a soft touch and a payday. And Holyfield only fought Douglas because he had the title. And Douglas curled up and quit. He was never a factor before the Tyson win, and never a factor after. Much like Leon Spinks - for one night, he was better than the best, and never reached that height again. Holyfield was more like Michael Spinks. He kept doing things he shouldn’t be able to do - move up from a lower weight class, win the heavyweight title, beat Tyson, even beat Bowe once, come back from the heart defect, etc. Holyfield was a good fighter who made himself great thru sheer force of will. Tyson was a great fighter who made himself only good, mostly for lack of the same.

The reason I includled Douglas as one of the great heavyweights of the time is because he wasn’t just great for that Tyson fight. Yes, he was an underachiever, but when motivated and dedicated to his training he was one of the best. He beat Greg Page, Trevor Berbick, Oliver McCall, and fought well against Tony Tucker before being defeated by insufficient dedication to his training(he got tired late).

Now of course the fighters he beat weren’t “the greats” by any means, but he was competing in the same heavyweight field as Tyson and beating most of the same guys. Much like Tyson, had his shit been together he would have been one of the best of the era. The Tyson fight wasn’t a fluke, that was just how good he could be when motivated.