Disclaimer: I’m living alone in a subterranean apartment with the windows to the garden side about two feet above ground level.

So I was sitting here in my living room on a lazy Friday night at 10 PM, watching football (soccer) on TV and listening to music, when I caught a glimpse of a black shadow in my left eye. Now, I’m not easily shocked, but I first thought of an insect or a spider, these are the usual suspects when something other than myself moves here, but this was too big. Turned out to be a rather large black cat, and he (I assume it was a he, I imagine to be able to tell the sex of a cat or a horse by their built. Couldn’t do it with dogs) seemed as surprised as me when we looked each other in the eyes. Now, I know cats, had some myself for long times, so I stayed cool and went after him to get him out. Then it also dawned on me how he had came in: my sleeping room window was open to let in fresh air. When I stepped into that room, he was already sitting in that window and leapt out. But he had had a little fun before, he had dragged out three pairs of my socks from an open cabinet door. I know him from sight, he’s one of the neighborhood cats that sometimes roam the garden, but I have no idea who he belongs to. But he sure can come back, maybe we become friends

So, uninvited but not unwelcome.

If he was willing to come in, chances are (I think) that he is not a homeless cat, but one that lives in a person’s home and is allowed to wander outside. Not the best idea for the cat’s safety, but I’ve pretty much given up trying to persuade people to that view. Anyway, it might improve the chances that he is fixed so he won’t want to mark your territory so much.

I hope he becomes your friend. Many neighborhoods have “neighborhood cats” who wander while they may. I find it cheerful to think a cat may decide to become my friend without it being forced on my part. One of my ex’s cats decided that he preferred to live elsewhere but would occasionally come in to see what food was on offer and see if the bully who chased him away was still living at home. I really enjoyed that.

I’m in U.S. suburbia so my cats are indoor creatures only for their own safety. But I miss that about the U.K.

Male cats, like humans, tend to have shoulders wider than their hips. Female cats shoulders and hips are about the same width.

If he was willing to come in, chances are (I think) that he is not a homeless cat, but one that lives in a person’s home and is allowed to wander outside.

I’m sure he’s not a stray, he looks much too healthy and well looked after. I also have seen him a few times before in my garden, so I’m sure he’s some neighbor’s family cat that’s allowed to roam free. This is a very rural place with little traffic, so the dangers for the cat are few.

At an apartment where I used to live, one of the neighbors had an extraordinary cat that would often visit me. It was playful and highly intelligent, it had beautiful markings and it always looked like it was smiling. An intricately striped tabby, it looked a lot like photos I’ve seen of Bengal and Mau breeds. My girlfriend didn’t like cats but this one won her over on first meeting, as it had a way of imposing itself. She didn’t want to admit it, because that’s just the way she was, but she had to laugh when I said I wasn’t sure if the cat was charmingly rude or rudely charming, because that’s just the way it was. A real character.

Up the street, there was a vacant lot where I would sometimes park my car. One evening, there was a group of young people with a couple of German shepherds. As I approached, I saw the cat squaring off to deal with the dogs. They ran up to it and abruptly stopped about two feet away. The cat just sat down and stared back (probably smiling), which seemed to baffle and intimidate them. The bigger dog cautiously moved closer and began to slowly inch its head forward. I knew that all hell was going to break loose in another second and that things weren’t going to end well for my friend the cat, which wasn’t moving so much as its tail. So, I got there just in time to scoop up the cat… and all hell broke loose, anyway. The dogs were barking and jumping all over me, the cat was doing its best to wriggle free and the young people who had seen it all happen were laughing hysterically. It must have been quite a sight.

When I moved away a few years later, that cat was one of just a few friends that I knew I was going to miss, and I’m decidedly NOT one of those people who prefer the company of animals over humans.

I was once visited by a neighbor’s siamese cat when I was living on the second floor of a house. To get to me it had to climb partway up a tree, then jump onto a sloping roof that led to my open window. This only happened once so apparently this was too much effort and I did not met its high standards for return visits.

UPDATE: first, I was wrong, it’s definitely a she, as you know cats are not afraid to stretch their butts almost into your face (they have no shame), so I could definitely identify that. Second, since I first posted (which was already in July, I wouldn’t have thought the “first contact” was that long ago), she visits me every two or three days, always around the same time, between 5 and 8 PM, when I use to have my bedroom window open. We really have become friends, she has already inspected every nook and cranny of my apartment and has her favorite places. She mostly stays for 30-40 minutes, then she slips out of the bedroom window and continues her route. She’s very social and steadily gives me head bumps and lets me cuddle her. Sometimes, she purrs. Of course I have given her a name, or @The_Butterfly_s_Ghost, respectively. I told her that I wanted to call my next cat Erwin, after Schrödinger, but then the cat turned out to be a she, and I had to think of a different name. So @The_Butterfly_s_Ghost proposed Ada (after Ada Lovelace), and since I used to be a programmer, that fitted perfectly. So now, out of nowhere, I kind of have a cat. And it’s nice

I’ve been badly startled by a super friendly neighborhood cat a few times. I’d be on my knees pulling weeds or something and he(?) would bonk his head into me in that ‘Need Pats Now’ way when I didn’t see him coming. Or brush up on my leg from behind when I’m distracted while grilling.

I haven’t seen him in a while, though.

When I first moved to London, I rented a room on the ground floor. One night I heard meowing outside, so I opened the window wide and in hopped a small tortie cat. It let me pet it, stretched on the bed briefly, looked around the room, and left.

On a different day, a flat-mate was coming back from work, and as he opened the front door to walk in, a white Persian cat walked in past him, like it owned the place. This visitor stayed for about an hour. We didn’t feed it, but all four of us petted it, played with it and let it look around the place. When it had enough, it asked to be let back out, so we did. I never had a ground-floor room again and no feline visitors.

My last cat would occasionally visit neighbors over the balcony. It was quite a jump, so he only managed it if we really weren’t watching him. He always came back the same way, so we never had to go to the neighbours and ask to have him back.

We really have become friends

Glad to see that, for both of you!

My BIL and SIL host Thanksgiving every year up in northern California. A few years ago, my parents, my husband and I rented a small house up there for the weekend; my husband and I had a bedroom on the second floor with a private entrance and exterior staircase. Late one evening we heard scratching at the window and saw a cat trying to get in. We opened the door and he zoomed right for the bed. It was chilly but entirely survivable outside, but he had apparently decided he’d prefer to be inside for a bit. He cuddled us both for hours, rolling around, solicitation skritches, and purring, and then eventually left. It was the highlight of our trip.

My friend Ann, who lives on Mission Hill in Boston, has looked out for a big feral yellow cat she calls Blaze for a couple of years, bringing him food. He has very, very gradually become used to her, and last month got up the nerve to come to her back door. She let him in, and videoed him exploring the place - which a mutual friend posted on Youtube with a soundtrack of Jack Skellington from The Nightmare Before Christmas - “What’s this? what’s this? I can’t believe my eyes!” etc.

He now comes around often and sleeps in a box of straw - but maintains his outdoor self most of the time. Ann found some pictures she’d taken four or five years back of a couple of feral kittens in the neighborhood, and damn if Blaze isn’t one of them.
https://m.youtube.com/watch?v=R31VMuGk5xg

And in good Doper tradition, I have to post pictures of Ada. She visited me for the last five days, at least staying an hour, sometimes longer. And she’s totally cool with falling into deep slumber, as you’ll see. (please don’t mind the mess, my sofa is some kind of second table, for the other stuff that doesn’t fit on the table anymore…). 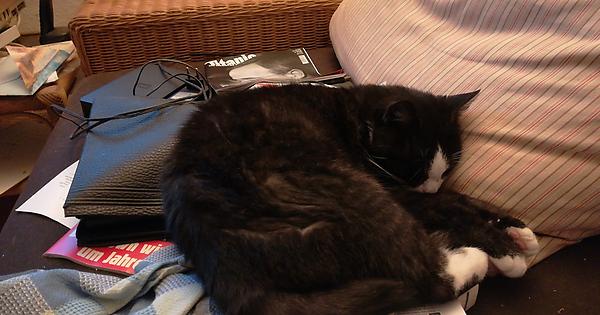 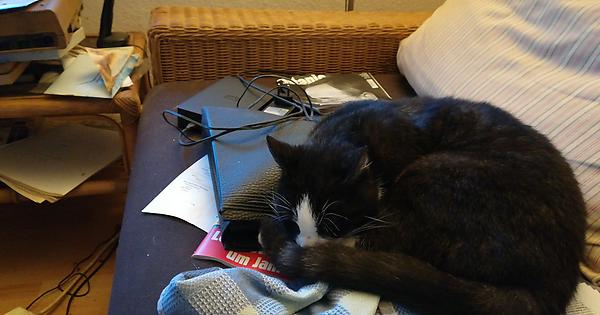 :tummy rubs for Ada when she is awake:

. It’s been a few hours, now she’s long back to her actual family.

What a lovely friend to have.

I had an inside/outside cat that was friendly and would disappear for days on end occasionally. I figured she was hanging out at someone’s house.