Angel Hernandez, MLB, and the fans

Would it be possible for MLB fans to force MLB to terminate Angel Hernandez? Say season ticket holders from all over the country got together and filed a class action lawsuit against MLB, claiming that they expect a top-tier product for the money they’re shelling out, and Angel Hernandez is not a top-tier umpire. Is this something that would have a chance?

Angel Hernandez is a disgrace and has been for years. How does he still have a job?

Let me put it this way… I’m not a huge baseball fan, I don’t watch a ton of games, I probably won’t even recognize the names of some of the hottest players in the league. Yet I knew exactly who you were talking about with this thread.

Angel Hernandez is a disgrace and has been for years. How does he still have a job?

The umpires’ union makes it effectively impossible to fire an umpire for incompetence.

Hernandez is NOT the most incompetent umpire, by the way. He is quite bad, but he’s nowhere near the worst. He is the most famous incompetent umpire because of some high profile moments and the fact is is famously also an aggressive, imperious dick, but he is objectively not as bad at making calls as Laz Diaz, Kerwin Danley, or Mike Winters, among others.

Angel Hernandez is a disgrace and has been for years. How does he still have a job? -

Hernandez is NOT the most incompetent umpire, by the way. He is quite bad, but he’s nowhere near the worst. -

I’ve read that umpires typically get 88% of balls/strikes called correctly. Which is fairly remarkable considering how fast a ball is going in a pitch.

But that still means out of every 10 pitches, they get one wrong. That one pitch could change the course of a game. I don’t understand why that’s at all acceptable. There is technology that will get it right 100% of the time. It’s a very simple thing; does a ball travel through a 3-dimensional space? If so, strike. If not, ball.

They don’t fire the worst, either.

Perhaps even more galling is that other sports DO use machines to make judgment calls. Tennis, of course, has machines to check every in/out call that can be made. It would be unthinkable to not have electronic timings of track and field races or swimming.

Ball/strike accuracy is more like 91 percent, not 88. Since 2015 the best full time umpires, according to Umpire Scorecards, are DJ Rayburn, James Hoye, and Mike Muchlinski, at 92.5 percent, and most fans don’t know who those guys are… because good umps aren’t well known. The worst ump who worked full time for most of that period is Mike Winters, at 90.6) is However. bear in mind that is ALL called pitches, including strikes right down the middle and balls that hit the ground five feet in front of the plate. Call accuracy on pitches on or near the edges of the zones aren’t anywhere near that high and the difference between the worst and best umps would look significantly greater.

Worse still, umps have good and bad days, and their calls are not distributed evenly; Jeff Nelson by himself may have changed the outcomes of THREE games this year (he’s only been home plate ump in nine games) but he did a fine job in a May 17 match between the Angels and Rangers, missing only four ball/strike calls and having no measurable impact on the score.

Asking humans to make judgment calls that human beings just cannot reliably get right is absurd. I can tell you all day how Jeff Nelson and Laz Diaz are shitty umps, but if we ask people to make split second decisions on the to-the-half-inch location of a 95-MPH slider that curves fourteen inches, we’re going to get this kind of stuff.

I’m sure that tradition is a big part of it, as likely is the umpires’ union (as @RickJay noted).

They don’t fire the worst, either. -

Who do they replace them with? Someone who didn’t even qualify to umpire at that level?
Maybe technology (and/or) the increasing level of performance is showing the limits of a mere human in making those calls.

Who do they replace them with? Someone who didn’t even qualify to umpire at that level?

You would replace them with the best/most promising umpires in the minor leagues, the same way that MLB promotes new umpires to replace those who retire.

There is technology that will get it right 100% of the time.

Probably not 100%, but a LOT higher than at present.

I think it would improve the game in multiple ways:

Why do we still rely on a person to call this?

It’s a change that’s probably inevitable, and that many feel is overdue; but it would be a change. 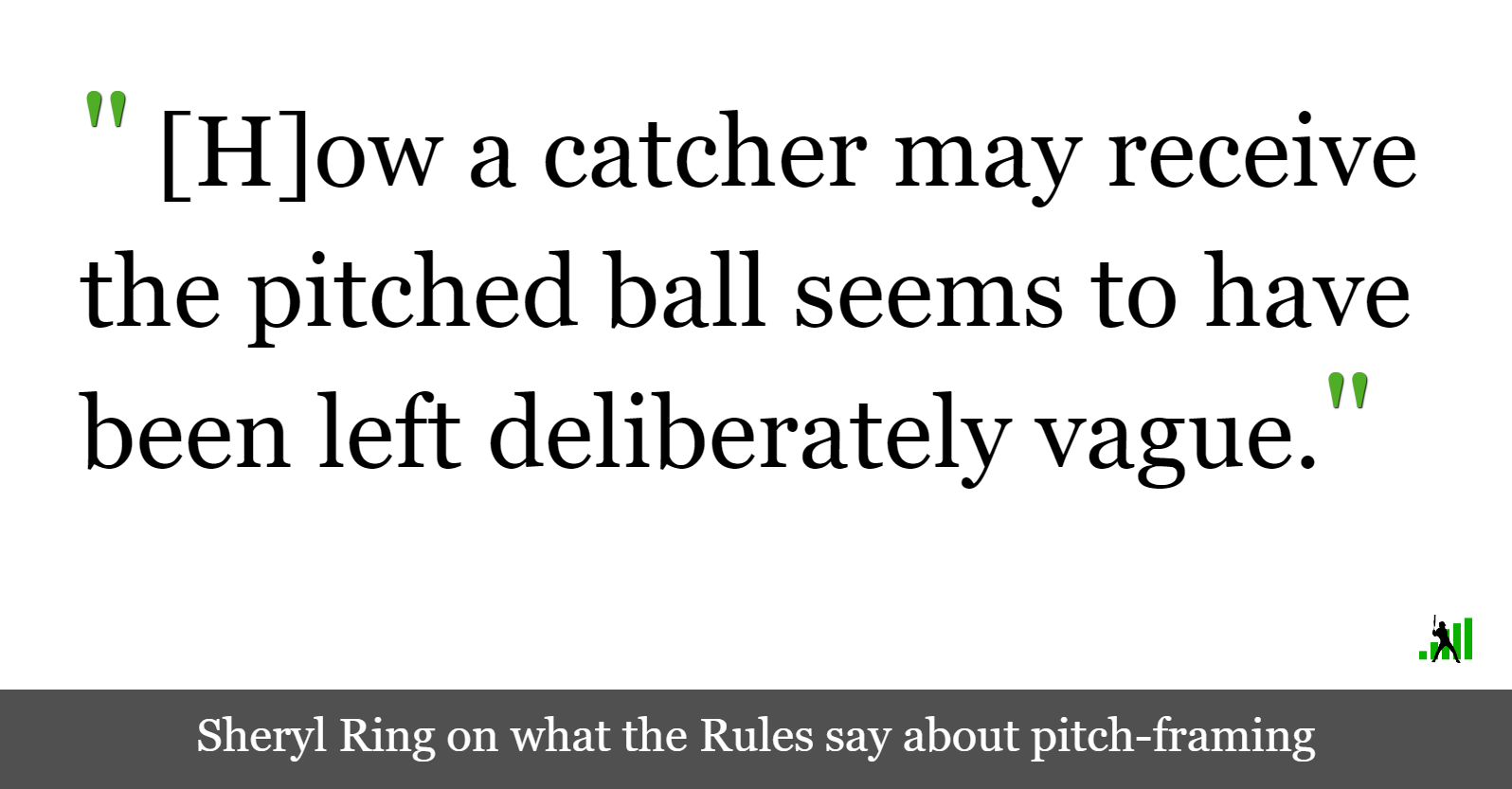 Let's figure out whether the Rules allow pitch-framing, once and for all.

With due respect to Fangraphs, this is just a terrible column based on weird, silly definitions of words; it asserts that making an accidentally wrong call is “cheating,” uses a definition of a “Strike” by only using the first sentence of the definition and ignoring the rest, as a result of which Ring is just plainly wrong, because she assert a pitch is by-the-rules a strike just because the ump says so. That is absolutely wrong. Here is the definition:

A STRIKE is a legal pitch when so called by the umpire, which:
(a) Is struck at by the batter and is missed;
(b) Is not struck at, if any part of the ball passes through any part
of the strike zone;
(c) Is fouled by the batter…

The roboump is like a really good pair of glasses, it’s just a tool.

I would say that the umpire at the plate can still call balls and strikes, just do so based off the tracker. The same way that umpires look at replay to review if a person got tagged out. It’s a new tool that helps them do their job better, but it’s still their job.

Worth noting that having imperfect umpires make these calls also adds another level of difficulty for the players, which should be part of the game. This goes even beyond the actual number of blown calls by the umpires.

A batter sees a pitch coming. He thinks it’s going to be outside the plate. Does he swing anyway? Ideally that would depend on his own confidence in his ability to call a strike, and also on whether he thinks it’s worth swinging at a ball outside the plate for whatever reason. But add in umpires blowing calls, and now the batter has to also account for the possibility that the umpire mistakenly calls it a strike even though it isn’t. Especially with two strikes already, that can be a major factor. And no reason why it should be.

which should be part of the game

“which should not be part of the game”. Sorry.

“which should not be part of the game”. Sorry.

Thanks for that, your post was confusing at first.

Totally agree, rules being improperly enforced shouldn’t be part of the game if it can be helped. (Nobody expects officials to be perfect, but if they can be better, they should be.)

I continue to be baffled at how officials of slowest-paced sport in the country that does not use chairs, who stand in one spot for the entire game, have to watch a maximum of three things at any one time, and almost always have a perfect angle, can be so damn bad at their jobs. I don’t think any of the examples given would last two weeks in the NBA.

Hypothetically, would a mass protest or outright boycott be enough to bring about change? It’s never going to happen, of course; it’s been abundantly clear since at least the last labor stoppage that there is no floor with the fans, but even if they were serious about it, would it make a difference? Even the massive loss of attendance from the pandemic didn’t seem to hurt any of the power brokers to any significant extent.

And yes, I’m 100% in favor of modernization for the reasons 3AxisCtrl mentioned.

Even the massive loss of attendance from the pandemic didn’t seem to hurt any of the power brokers to any significant extent.

But the poor owners barely got by! MLB Commissioner: stock market is a better investment than owning an MLB team

MLB's Rob Manfred says owning an MLB team is 'below what you'd get in the stock market.'

They sacrifice so much and deserve our pity.

if any part of the ball passes through any part
of the strike zone;

To me, the biggest obstacle is how the electronic umpire would define the “strike zone”, particularly the upper and lower bounds. I would think batters could game it by crouching before repositioning themselves once the ball has been pitched. While you could use prior at-bats of the batter to pre-determine the strike zone, batters are allowed to change their stances so not sure that would be fair.

I would think it would actually look at the player’s stance as the ball crosses the plate, rather than trying to determine it before it happens. I would also expect it to be able to show images of where it was to make sure that the computer didn’t mess up and read something incorrectly.