Any record of anyone killed by a teeny tiny gun?

A guy in Japan has been charged with possession of lethal weapons for having two keychain guns. 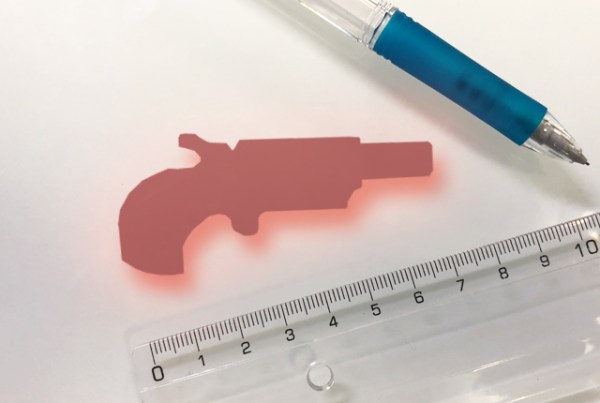 I read that a kid managed to kill his Father with a .22 blank.

From the article, they’re 2mm pinfire revolvers. Makes previous ‘tiny’ guns like Vassily Blokhin’s Walther TPH or a North American Arms Mini-Revolver seem huge. 1 foot-pound of energy, per comments in this video. See one shot in slow motion in this video. 1 foot-pound is below the muzzle kinetic energy of many air rifles and pistols. Does Japan allow ownership of those as well?

I won’t say it can’t kill someone, but I’m not aware of an instance.

There are lots of people who have been killed by small .22 pistols, but “2mm pinfire” is smaller than that. From quick googling I don’t think they have any actual usage in homicides or crime. In the US, they’re considered ‘antique firearms’ and not regulated because the ammunition used is pinfire and not centerfire (like most modern cartridges) or rimfire (like .22 cartridges), but they definitely meet the technical definition of firearm. Seems to me to be an incredibly bad choice for any kind of self defense use - they’re too absurdly weak to be effective, the gun itself does not look intimidating so won’t scare someone off (unlike an airsoft or replica gun), but are technically a firearm so likely run afoul of firearms laws (like happened to this guy).

Don’t know what the law is exactly, but in NY the police will at a minimum confiscate those things, and will certainly threaten charges.

To clarify, when I said ‘in the US’, I meant ‘under federal law’ or ‘as far as the BATFE is concerned’. It does not surprise me that states with strict gun laws would still classify and treat them as regular firearms.

For those researching, these are sometimes called parlor pistols.

No, I meant specifically ones as tiny as the ones in the link, not anything bigger. (I remember once as a child meeting a cop old friend of my mother’s who had a similar functional tiny gun in his belt buckle.)

Technically it’s a firearm, and a weapon, but the guy may have a credible defense that it is not a lethal weapon. Now, I realize this is not accurate, but if the bullet’s awesome 1 J of energy were distributed across a 2 mm diameter, that makes a bit over 30 J/cm² which seems like it could penetrate… something; maybe it would not bounce off if shot into someone’s face at close range. So you would still have to argue about terminal ballistics to prove it couldn’t kill anyone.

While I don’t read Japanese so I can’t read the actual law, from summaries online it looks like Japanese law prohibits the possession of ‘firearms’ except for specific purposes with a permit. There isn’t an actual requirement in the law that the firearm be of any particular power, just that it is a firearm. I think the ‘lethal weapon’ stuff is from laymen interpreting and translating Japanese news articles.

I remember once as a child meeting a cop old friend of my mother’s who had a similar functional tiny gun in his belt buckle.

That sounds like a NAA Mini-Revolver that I mentioned above, Darren. They do look like toys, admittedly.

Even if firing .22 Short, and even with a short barrel, it would have considerably more kinetic energy, as well as firing a wider projectile, than that 2mm pinfire.

I think the ‘lethal weapon’ stuff is from laymen interpreting and translating Japanese news articles.

FWIW, that is the English-language sub-set of a Japanese site, with the writers living and working in Japan.

I remember once as a child meeting a cop old friend of my mother’s who had a similar functional tiny gun in his belt buckle.

That sounds like a NAA Mini-Revolver that I mentioned above, Darren. They do look like toys, admittedly.

Possibly. It was something sorta like this. Although I seem to recall there being bullets in the buckle, too, so I suppose there is some possibility that he was wearing a literal toy. (I saw it in the late 70s/early 80s.)

Here’s another video of one of these guns being fired, point blank at various things:
https://www.youtube.com/watch?v=F7Wu2mKw7VA

So it looks like they would maybe be capable of piercing human skin, and probably causing eye damage, but it’s hard to imagine any lethal scenario. Maybe if one was discharged pressed right up against someone’s carotid artery, it could cause enough damage for them to bleed out, if other factors prevented them from getting help

I read that a kid managed to kill his Father with a .22 blank.

Well, a blank is just a bullet without the lead projectile. But it still has the gun powder and wading in it which will come out just as fast as it would if the lead were present. Getting to close to it can be dangerous. A few actors killed themselves screwing around with blank loaded guns.

A point of comparison - what that thing is shooting a single pellet of is essentially #9 bird shot - small even for bird shot sizes. That size is typically used for skeet shooting, where the shooter is attempting to shoot a fast moving clay pigeon at fairly close range, or maybe small birds like doves, Heavier shot is used to assure a kill when shooting most game birds.

A BB from a standard BB gun is larger, and as noted, many BB guns will have higher energy. I strongly suspect that getting shot by that thing in most parts of your body are not going to do anything more than leave you with a pellet lodged in your skin, if that. I expect it could sting.

For what its worth, I would like to add that I believe these weapons are highly lethal. If I were to shoot someone with one, I imagine they would get pissed off enough that they would then kill me rather handily. They also seem perfect for those who want put a little sport into their roach control efforts.

1 ft.lbs KE is extremely little even by airgun standards. Many countries with very restrictive airgun laws (e.g. Germany) put the legal limit at 7.5 J or 5.5 ft.lbs. Most of my airguns put out four to five times that.

I suppose that if a doctor in the middle of brain surgery fired directly into the exposed brain at point blank range with one of those tiny contraptions there would be a possibility of killing the patient, but other than that…

John Wilkes Booth’s derringer was pretty small, but not that small.

I suppose that if a doctor in the middle of brain surgery fired directly into the exposed brain at point blank range with one of those tiny contraptions there would be a possibility of killing the patient, but other than that…

Well, if you have enough time to prepare for surgery, you could just take the quick and easy method of clogging their windpipe with it.

But yeah, a .177 air rifle is a cannon compared to one of these, and it’d still take a really lucky shot to be fatal with that.