Anyone remember Marvel Comics' "No Prizes"?

They were a staple in the letters columns in the back of comic books. A “No Prize” would be awarded when someone spotted an error, but came up with an explanation about how it really wasn’t a mistake because Marvel’s artists never made mistakes :rolleyes:

(an example I remember is a character had the sleeve torn off her uniform in a fight, a couple pages later she appears with sleeve intact, and next time you see her, no sleeve. The “No Prize” winning explanation was along the lines of she taped it back up or used pins that fell out easily)

I remember them. There was a story in the editors page about the history of the no prize, at first your prize was just being mentioned in the next issue, you actually got “no prize.” Then people started asking where there no prize was, so they started mailing envelopes that said “no prize inside!” so people would have something to show for their no prizes. Then people wanted to know why their no prize envelope was empty.

Just in case you missed it. . . Earlier thread from last year.

Then people started asking where there no prize was…

Where their no prize was. Gah. 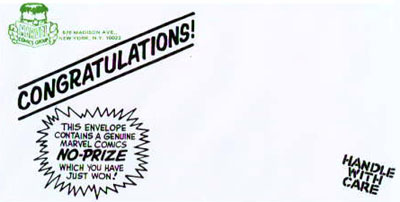 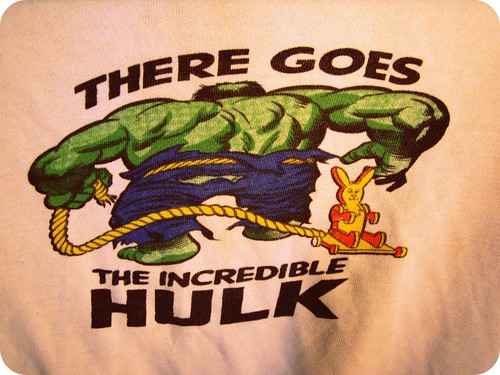 My cousin got one from pointing a continuity error in The Incredible Hulk. He showed it to me - it was the empty envelope linked to above.

In the '70’s you’d get one (that being just a lettercol mention, not an envelope) just for pointing out a mistake. But the editors got sick of everybody writing in about that, so by the Shooter era you had to actually explain the mistake away like the OP says. And if the letter writer didn’t do that – just noted an error – the editors usually got pretty snippy about how just noting an error wasn’t prize-worthy, as if that hadn’t been the standard in the old days. Of course, back then the readership was mostly kids, so they could get away with rewriting histroy every 10-15 years.

Of course, back then the readership was mostly kids, so they could get away with rewriting histroy every 10-15 years.

I’m pretty sure they never stopped rewriting history every 10-15 years. Although Marvel was never quite as bad as DC in that respect.

Ah, yes, I remember those. As well as the MMMS (Mighty Marvel Marching Society).

I guess my memory isn’t so mighty after all of these years.

I’m pretty sure they never stopped rewriting history every 10-15 years. Although Marvel was never quite as bad as DC in that respect.

arrrrrrgh the only thing worse than the continuous ret-cons were the Mighty Marvel Megacrossovers :mad: When you’re 10 you can’t afford to buy the Avengers, X-Factor, X-Men, Fantastic Four, Spiderman, and the Incredible Hulk just to follow one storyline!