Are Doctors still asking odd (to me) questions?

I haven’t been to a doctor in a long time and my gf has been getting on my case about it. The thing is, the last time I was at a doctor’s office I was offended/weirded out by the out-of-left-field questions they asked.

The first was “do you have guns in your house” or something similar. I answered, “that’s none of your business”. Then it was “do you feel safe in your home?”. I lost it. I was there wanting to find out if my foot pain was caused by gout, which was what my googling had come up with.

Are they still doing this?

I had my last check-up in December and, no, I wasn’t asked any of those questions. But then again, I don’t ever recall being asked any questions like that, and I go to the doctor at least once a year for my check-up.

Are they still doing this?

Yeah, some are. Mine were in a checklist on the clipboard during the “records update.” It’s not for you. It’s for people who don’t feel safe in their house (unfortunately many) or for people with kids and guns, so they can have a conversation about gun safety. Those odd questions might save a life or two, so just let it roll off your back. No harm done.

Here’s an article about it 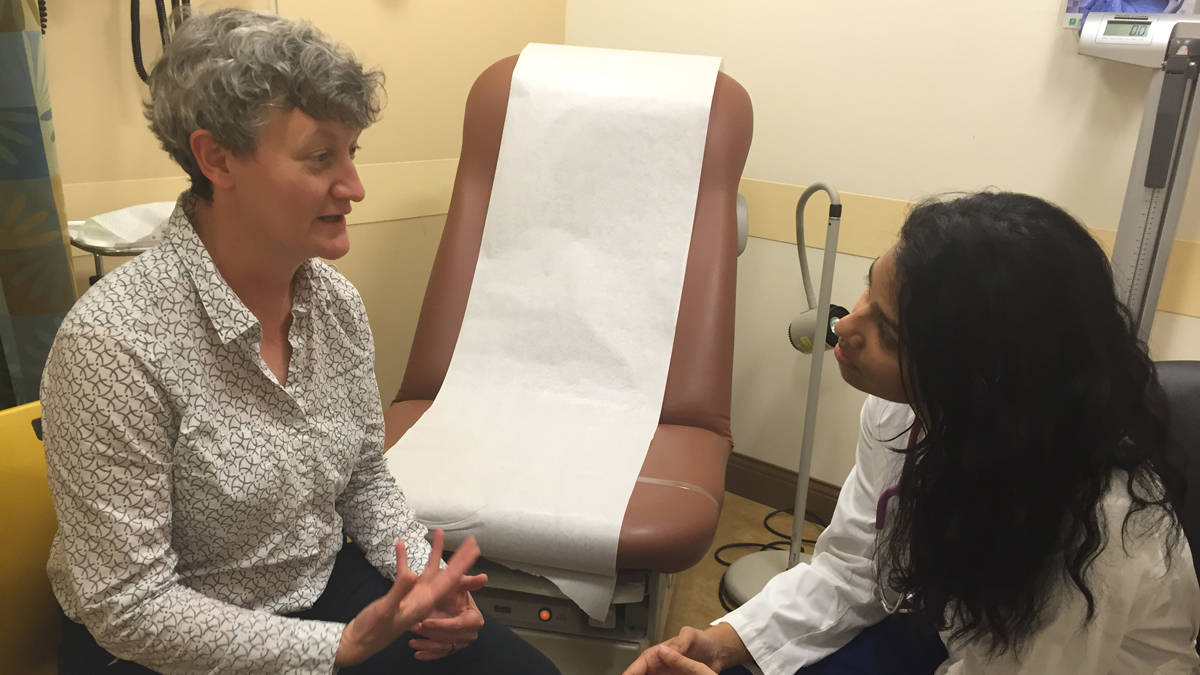 Doctors asking about domestic violence is important, but daunting - WHYY

Doctors are certainly used to bringing up uncomfortable topics – they ask us about all kinds of very private things; sex, drugs, and how much we weigh.

In his later years my spouse would get questions like that, especially on an ER visit - given that elder abuse, and abuse of the disabled, is a thing I’m assuming that it was the doctors looking out for their patient. He got pretty put-out by the questions until I pointed out the whole abuse angle. Just because he was loved and well-cared for doesn’t mean everyone who is vulnerable is.

Here is a story from a few years ago. Yes, doctor’s will ask, and as you get older (i.e., become a member of a group more at risk, the elderly) you will be asked more consistently.

Last couple times with a check up. My spouse too was asked. Only if you feel safe, nothing about guns though.

Mine were in a checklist on the clipboard during the “records update.”

It’s quite possible I had one presented to me in that format (on a questionnaire to fill out), but I wouldn’t have remembered it as I expect all sorts of questions on that.

Patients have a right not to answer what they see as intrusively personal questions.

It seems reasonable in the light of commonplace abuse situations to inquire about personal safety. The gun question* would be particularly important when dealing with parents of small/vulnerable children.

*you could always answer that arms and ammo are stacked in key locations around the house for easy access in case U.N. troops show up, but you never know when a humorless M.D. might take you seriously.

If you didn’t feel safe at home you might be glad he asked. The doctor can connect the abused with all sorts of resources. It feels weird if you have always been in a stable home because it’s not strictly a medical issue, but isn’t it worth the slightly off-topic questions if they can help people in dangerous situations (arguably a legitimate concern for a medical practitioner)?

If you don’t want a doctor’s likely poorly-informed opinion on gun safety, just say “I decline to answer” on that one and they’ll go on to the next question.

There are plenty of people who own guns who don’t know how to be safe with them (often from ignorance) and your doctor is just trying to help.

On the other hand, the doctor doesn’t try to give you safety information about your circular saw, so feel free to be annoyed by the clearly political motivations as well.

Regardless, go see your doctor. Medical screenings are important.

I was just asked the domestic violence one yesterday. And as far as the guns go- I think they are a little different from circular saws. Not because gun safety is so much more difficult than circular saw safety , but because I doubt very much that any one specifically worries that their husband will kill them with a circular saw or that their depressed teenager will kill himself with one.

And when it comes to the pediatricians and gun safety - that just goes along with the way the hospital made sure I had my carseat properly installed when I left the hospital over 30 years ago and the questions about bike helmets etc.

Abuse is a gigantic problem. Having just come home from the hospital as weak as a kitten, I can’t imagine what life would be like with an abusive or neglectful spouse instead of the awesomely helpful one I live with. Who else would I tell if not in the privacy of a doctor’s visit?

People need to stop making the world about themselves, and realize that these questions are generalized to the millions and if they produce even a handful of hits, they preform an extremely valuable service. Circular saws, BTW, don’t kill family members accidentally or deliberately. No political motivation is needed for a doctor to view reality. Go to an ER and ask about the relative number of circular saw and gun cases.

If your answer is no, then just say no and move on to the next question. Don’t tread on a good thing for others with your self-centeredness.

Virtually every doctor I go to will ask me some form of ‘do you feel safe in your house?’. I assume they’re trying to give an abused spouse/parent/child a chance to tell someone what’s going on. The staff can then deal with that as they see fit. (police/CPS/abused spouse protection) etc, and the staff are likely mandatory reporters (at least for minors) so they’re required, by law, to let the police know about it.

But some of these people really just need someone to say ‘are you okay at home’ and give them the opportunity to say ‘no’.

The last dr. clinic visit I had, the paperwork (where you answered endless questions) the very first question after name/birthday stuff was “Do you feel safe?” It then went on to ask about symptoms and stuff as usual.

The next page also included the “Do you feel safe?” question along with IIRC a standard HIPPAA form.

For someone who doesn’t feel safe, for whatever reason … the person making them feel unsafe is, sadly, likely to be accompanying them. The few minutes of confidentiality behind the closed door of a Dr. visit are likely the only chance an abuse victim or a trafficking victim may have to alert someone, anyone.

They usually ask me if I feel safe at home. I am starting to look pretty old I guess, but I don’t think I look like someone who is afraid of others, and often more like others should be worried about me. They’ll also inquire about my mental health, asking about anxiety, depression, and suicide, and if I’m in the mood I’ll take them on a brief visit to the TriLight Zone before telling them not to worry about it.

But I understand the purpose of these things. Someone asked about guns in the house might suddenly be reminded they need to lock some things up now that the grandkids are visiting often. Medical personnel need to be ready to move on if the patient doesn’t want to go into it, but it doesn’t hurt to ask.

They usually ask me if I feel safe at home. I am starting to look pretty old I guess, but I don’t think I look like someone who is afraid of others, and often more like others should be worried about me.

I don’t think age has anything to do with it. A young healthy male might be less likely to be abused, but it can certainly happen.

Perhaps I should have used a different example. The top 3 causes of accidental death are poisoning, motor vehicles, and falls. Guns don’t even make the list. Doctors don’t ask about any of those (infant carseats when leaving hospital being a notable exception). My understanding is that the question is not meant to screen for homicide, it’s to discuss primarily storage (follow-up questions: “where are the guns kept? Are they locked up?”).

People need to stop making the world about themselves,

Thing is, as far as I’m concerned, the world most certainly is about me.

The last time I saw my PCP I was not examined, nor asked any questions. Details follow, but are not on topic, so they’re hidden.

My doctor and I talked about this at my last visit a few weeks ago. Besides taking interest in her patients physical health, he also like to see where they are in their mental health. Based on my previous visit last October, she said I appear to be much more relaxed, even my blood pressure was lower than usual. Retiring was the cause of that. She also told me that a lot of physical issues can be traced to one’s mental state. Besides treating the symptoms, she can also treat the cause.

I don’t think age has anything to do with it. A young healthy male might be less likely to be abused, but it can certainly happen.

I understand that. The questions we’re discussing here aren’t based on much qualifying criteria, everybody gets asked the questions, and often they won’t seem apt to the circumstances, or just seem to be plain old odd as they did to the OP.

yeah. I get those. Not about guns though. Do you feel safe kind of stuff.

Was asked if I was depressed, I answered “Well, after I saw what my weight is on your scale, yeah, sort of, NOW” They where not amused.

I want a doctor who will address the reason for my visit. Period.

So I take it you don’t want your blood pressure taken unless your symptoms could be related to that, or, if your blood pressure is high, you don’t want your doc to discuss that with you if it’s not related to your presenting symptoms? You may only care about the symptoms that brought you in, but doctors are interested in your overall health, including any imminent health crises, and you should be very glad that’s the case. I don’t understand why this particular question is ticking you off. It’s part of general screening and has nothing to do with “a good ‘bedside manner.’” And your doctor can’t know if the questions are useful for you unless they ask.

The top 3 causes of accidental death are poisoning, motor vehicles, and falls. Guns don’t even make the list.

The public health officials who keep track of gun violence of all kinds tend to think of deaths like Turner’s the same way local reporters do — accidental (or, more accurately, unintentional). Medical examiners, the people who record the data that the public health researchers track, tend to classify these deaths as homicides.

My understanding is that the question is not meant to screen for homicide, it’s to discuss primarily storage (follow-up questions: “where are the guns kept? Are they locked up?”).

I’m not sure where you got your understanding–Is it just from the follow-up questions?–but guns that are not locked up do lead to homicide–or, equally important, to suicide, and not just the patient’s suicide.