Banksy draws on a private home - that's for sale

Banksy paints on a private home that happens to be for sale. The owner of the house is trying to assure the artwork is preserved. Of course it can’t hurt the home’s value, right? 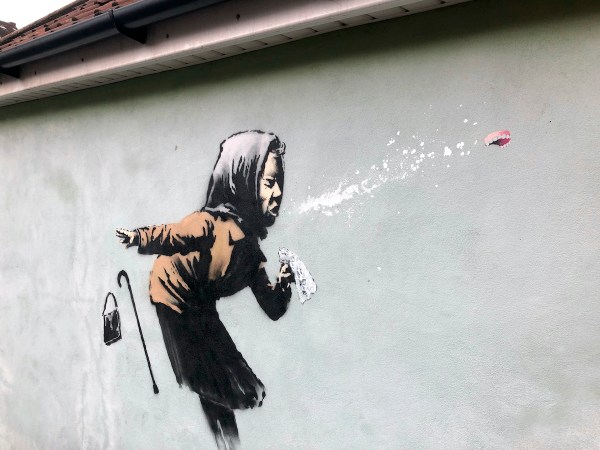 The street artist’s latest work has been met with excitement in Bristol.

I’m surprised that it would take any effort by the current owner. There are two sets of possible buyers: Those who want a Banksy, and those who don’t. To the former group, this increases the house’s value, and to the latter, it decreases it (because they would have to pay more to get it cleaned off or painted over). Thus, if the current owner sells it to whomever is offering the highest price, as is normal, it’ll end up going to someone who wants a Banksy. Who will then, of course, preserve it, because they want it.

Not really. There’s a lot of evidence pointing to one specific person, and who that person is is public knowledge. Anyone who particularly cares can look it up. That person hasn’t confirmed it, of course, because the mystery (or “mystery”) adds value to the artwork produced under both names, but there’s enough evidence that they don’t really need to.

How can you be so sure the owner commissioned it? And if the owner does, in fact, appreciate Banksys, what is wrong with that, or with the paintings’ artistic merits?

How can you be so sure the owner commissioned it?

How can anyone be sure it’s really a Banksy?

Banksy authenticates his own work through Banksy Pest Control, so if it is real then it should not be too hard to get it authenticated.
https://pestcontroloffice.com/faq.asp

In the meantime, the owners are complaining in interviews that they have had to pay for an alarm system and Perspex screen to protect the painting (an authentic Banksy is worth 10x as much as the house) and about the noise from all the tourists. In other words, using language that does not imply they asked for it.

If they tell you, they have to

Hey, it gives the local media something to talk about on slow news days…

For a graffiti artist, the fact that some people hate it is a feature, not a bug.

In the meantime, the owners are complaining in interviews that they have had to pay for an alarm system and Perspex screen to protect the painting (an authentic Banksy is worth 10x as much as the house)

Yeah given that their home investment value is now tenfold appreciated maybe not really such sincere complaints.

If I had a house and Bansky decorated it, I would probably want to sell, because owning a Bansky has no particular value to me, but I could get a lot of money for it from someone else. And yeah, I can see that selling a house when one wasn’t planning on doing so is a hassle and a nuisance (which would of course be offset by the money, but still a hassle).

But this is someone who was already in the process of selling their house. They had that hassle anyway. All that’s changing is that they’ll now get a whole lot more money for it. Yeah, I’m not seeing the complaint, there.

If he did that to my house, I’d paint over it. My artistic input should increase the value even more. He can’t complain.

PS, if I were a third party, and that scenario happened, I’d think the whole thing was a stunt.

The talk over the weekend among my friends (I live only a few miles from the house in question), based on media reports, was that the sale of the property had already been agreed but the owners had pulled out (presumably hoping for a much higher offer). But subsequent reports include a statement from the owner’s family that this is not true, and they have in fact spent money to protect the work: https://www.theguardian.com/artanddesign/2020/dec/12/owners-confirm-sale-of-bristol-banksy-house-going-ahead

Boy, that would sure show that annoying artist who just handed you a fortune.

If he did that to my house, I’d paint over it.

Here’s a better idea: Sell it to someone who wants it, and then burn the money you get. That would make a real statement!

Y’know given that Banksy had his art self destruct once and the shreds were likely of more value to collectors, maybe knocking down the wall and selling the rubble would be away to go!

Is there a guerrilla artist who specializes in rubble arrangement?

There was an incident a while back. One artist nailed up a banana, I believe, and then a rogue performance artist ate it.

You’d forego cashing in on tens (or hundreds) of thousands of bucks just to show contempt for a piece of art?

That kind of spite is really… something.