Bass Reeves and Judge Parker are an important part of my state’s history. Bass lived an incredible life. He is way over due for a movie of his life. 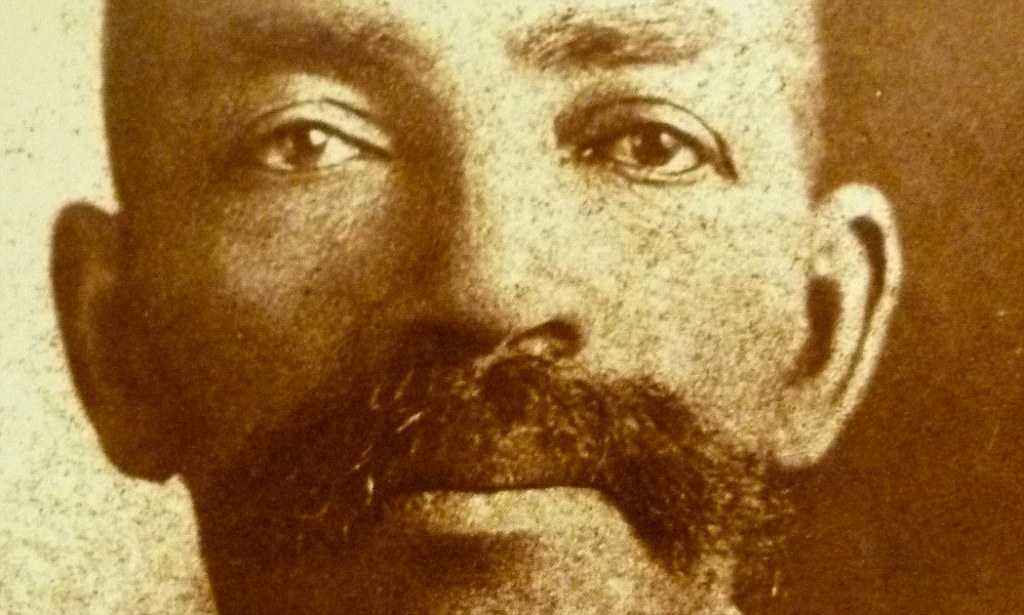 Bass Reeves, one of the first African Americans to become a Deputy U.S. Marshal west of the Mississippi River, could have been an inspiration for Quentin Tarantino’s fictional character Django.

Instead we get Quentin Tarantino’s Django. Five years from now it will be remembered as that movie that blasted the N word, the incredible profanity, and sickening violence.

Thank goodness Django isn’t a direct representation of Bass Reeves’ life. Bass deserves so much more. There was a real dignity to the way that man overcame slavery and accomplished so much as a lawman. I’d love to see a good western made that celebrated his accomplishments and not the violence or racial slurs.

Bass Reeves, one of the first African Americans to become a Deputy U.S. Marshal west of the Mississippi River, could have been an inspiration for Quentin Tarantino’s fictional character Django.

Reeves, who was born a slave, arrested 3,000 felons, killed 14 men and was never shot throughout his 32-year career as a federal lawman.

The fearless solider was born into slavery in 1838 in Crawford County, Arkansas, and eventually broke from his owner, George Reeves, to live among the Creek and Seminole Indians.

I’ve never heard Reeves’ name mentioned once in all the reading I’ve done on the movie and have no idea what you’re going on about.

As the article mentions there are similarities between the real lawman and Tarantino’s ex-slave bounty hunter character. Only Tarantino knows how much he based his character on the real lawman. Although, I’m so glad Django isn’t a direct representation of Bass’ life.

They did get an indie film made on Bass Reeves a couple years ago. Tarantino must be familiar with it.
http://blogs.indiewire.com/shadowandact/morgan-freeman-wants-to-play-famous-lawman-bass-reeves

Here’s some info I stumbled upon recently. It seems actor Morgan Freeman has attempted, for at least five years now, to get the story of famous lawman Bass Reeves to the big screen.

This guy lead such an incredible life and most people never heard of him. There are so many real life stories out there of blacks in the Cavalry, working as cowboys, farmers, and lawmen. Blacks were a vital part of developing the West.

Why did Tarantino make such a racist film?

Reeves was the first African-American inducted into the Great Westerners Hall of the National Cowboy Hall of Fame in Oklahoma City in 1992.

I don’t think Tarantino’s movie based on Bass Reeves any more than [del]Braveheart was based on William Wallace[/del] [del]Kubrick’s Lolita was based on the novel[/del] Inglourious Basterds was based on Wiesenthal (finally got it!).

If anything, this may help a Bass Reeves movie get greenlit, as a sort of response to* Django*/coattails flick.

I don’t see it. I mean, Django and Reeves are both free black men who shoot people, but that article doesn’t convince me of anything more. It looks like the Daily Mail is using Django as a hook to get page views … and hey, it worked on me! The only connections the article makes are in the headline and one sentence that says there are many similarities between Django and Reeves - similarities that the writer never makes clear.

That said, I would think Bass Reeve’s story might make an excellent movie. He sounds like an interesting character (and you have to wonder about accidentally shooting his cook while cleaning his gun). It doesn’t follow for me, however, that “Django Unchained” is any kind of ripoff or lessening of Bass Reeve’s story.

An excuse to vent about the movie?

Django the movie takes place in 1858, during slavery. The whole point of the movie is that it takes place during the slavery era.

There is no point at all to the OP.

I’d love to see a good western made that celebrated his accomplishments and not the violence or racial slurs.

Really? Then WHY DON’T YOU READ YOUR OWN LINK?

Bass Reeves’, a fictionalized film of the lawman’s life and military career was produced and released by Ponderous Productions of San Antonio, Texas, in 2010.

Therefore, Tarantino made a racist movie about your guy. QED.

You said ‘good’, not ‘widely-released’ or ‘well-publicized’; hence you were wrong in your original assertion. Admit that you were wrong and we can continue the discussion.

I rather focus on the positive. Hopefully the public will get interested in seeing a film about Bass Reeves. Morgan Freeman has been lobbying for years to get it made. Now it my happen. Sure hope so.

We need more positive films about black historical figures. Something kids today can look up to just like I watched John Wayne films.

My issue with Tarantino is the negativity. Spike Lee has been very critical too. It’s not exactly creative or original to repeatedly scream the N word in a period film. We all heard that stuff in real life not that long ago. It’s not shocking or thought provoking. It’s just an ugly racial slur used to sell movie tickets.

My issue with Tarantino is the negativity. Spike Lee has been very critical too.

He didn’t even watch the movie. He proudly admits he didn’t and has no intention of ever doing so. He’s basing all his statements based on his extrapolation of screenshots, trailers, news articles, and the products of his own fevered mind. He’s got zero credibility on the matter.

Actually, he and Samuel L Jackson have gotten into a bit of a public spat over it, with Jackson quipping that Lee hasn’t made a decent movie in years. Spike Lee isn’t some kind of “black voice” that represents African-Americans (or thoughtful, cogent argument, for that matter).

The article uses the movie as a hook and even uses the word “could” to justify it and promptly forgets the movie after the intro. As others have noted, there’s no connection, and it’s just a ploy to generate page views.

If your point is that a movie about Reeves should be made, there are better arguments than affiliation to an unrelated movie.

If your point is that Tarantino’s movie is offensive, there are better arguments than affiliation to an unrelated historical figure.

Your argument (whatever it actually is) is better served by figuring out what your point is before proffering a convoluted connection between role models, a Reeves historical movie, and Tarantino as writer/director.

We need more positive films about black historical figures. Something kids today can look up to just like I watched John Wayne films.

Missed the edit window, but this one is also a head scratcher. It’s not like every movie needs to serve some ostensible social purpose or further some kind of public agenda.

“The Searchers”
“True Grit” (and by extension, “Rooster Cogburn”)
“Three Godfathers”
“The Sons of Katie Elder”

John Wayne hardly plays people to look up to in any of those movies. Quite the opposite, in fact. And those are just the ones off the top of my head.

Why did Tarantino make such a racist film?

Have you seen Django Unchained, or are you basing that ridiculous question on what Spike Lee, who has not seen it, says?

I work with a lot of African Americans and all the ones who have seen it loved it, said they didn’t think it was racist, and rolled their eyes when I asked about about Spike Lee’s opinion.

In fact, reading comments around the web, the only people who are complaining that it’s racist, who aren’t going by what Lee says, are skinheads and other whites who don’t like how the slave owners/traders are treated. Are you a member of the KKK? Didn’t think so.

See it and make up your own damned mind before saying such things. If you HAVE seen it, go to the Django thread and lay out, point by point, precisely how and why you thought it was racist toward blacks. Something a little more indicative that you’ve actually seen it than “Tarantino used the N-word a lot.”

I wonder if Nat Turner’s life would make a good movie. I know I’d watch it.

An excuse to vent about the movie?

It seems that way

I wonder if Nat Turner’s life would make a good movie. I know I’d watch it.

A John Brown movie will be made before a Nat Turner one, I bet.

A John Brown movie will be made before a Nat Turner one, I bet.

I recently watched Santa Fe Trail – available for instant viewing on Netflix – with Errol Flynn as the heroic Jeb Stuart, fighting alongside Ronald Reagan as the equally heroic George Custer, against the villainous John Brown and his abolitionist ways. (It’s, uh, jarring, to say the least. But, hey, Olivia de Havilland!)