Batwoman Season 3 premieres on Oct 13. Note the change in schedule; the show now airs on Wednesday.

Most of the main cast remains with the show: Javicia Leslie as Ryan Wilder/Batwoman, Rachel Skarsten as Beth Kane/Alice, Megan Tandy as Sophie Moore, Nicole Kang as Mary Hamilton, and Camrus Johnson as Luke Fox/Batwing. Dougray Scott will not be returning as Jacob Kane nor will Wallis Day as Kate Kane.

Victoria Cartagena will be playing Renée Montoya; she previously played the same character in the otherwise unrelated Gotham. Robin Givens and Nick Creegan will play Jada and Marquis Jet. Bridget Regan will play Pamela Isley. There will also be a host of Batman-related villains, the casting of which has not been announced.

SEASON PREMIERE - As Batwoman continues to keep the streets of Gotham safe, Batwing joins in on the action, but Luke quickly realizes he hasn’t quite mastered his suit. Meanwhile, as Alice sits hopelessly imprisoned in Arkham, Sophie fully enjoys her freedom. When Ryan pays Alice a visit to ask about the bombshell she dropped - that Ryan’s birth mother is still alive - Ryan must decide if she should go down the rabbit hole of her past. As Mary prepares to finally graduate from medical school, she feels the absence of her family more than ever. But when an Alice admirer stumbles upon one of the missing Bat Trophies, Gotham and the Bat Team get mixed up in the madness, culminating in a shockingly gruesome graduation… and an equally shocking new partnership.

That was actually a promising start to the season. They’ve gotten rid of most of the Kate Kane baggage and jumped right into what appears to be the main plotline of the season – rounding up all the OG Batman villain gadgets and taking care of the lowlifes that happen to pick them up. Victoria Caragena as Renée Montoya is a fine addition to the cast.

Who the heck is Jada Jet? I was hoping Ryan Wilder’s mother would turn out to be Selina Kyle.

There’s a DC superhero Jet, a black Jamaican woman living in the UK. I don’t think that’s what they’re going for here. There’s also Jezebel Jet, ruler of a small African country. She may be closer to what we’re seeing here. 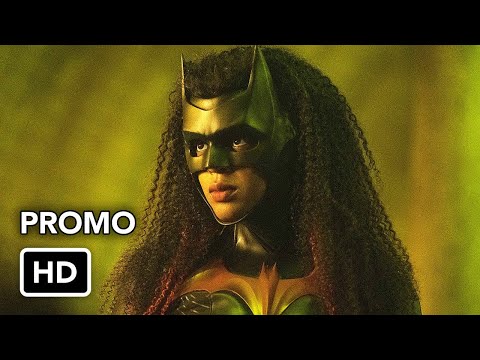 A BITING CHANCE - When a new incarnation of Gotham’s swamp slumming Killer Croc surfaces and starts racking up a body count, the inaugural team-up of Batwoman and Alice is put to the test. But Alice isn’t the only unwanted intrusion into Ryan’s life when Jada Jet shows up at Wayne Enterprises, insisting on meeting the company’s new CEO. Luke and Mary’s relationship is strained under the weight of a secret Luke is keeping, while Sophie finds herself becoming part of Ryan’s inner circle.