I was running an errand in another part of town yesterday when, without even thinking about it, I pulled over and ended up in a Bead Store. I’d never been in a place like this before; Beads everywhere! Mounded in baskets, rows of plastic tubes organized by color, and hanging from the wall in thick ropes of many strands. The lady asked if she could help me, but I’m sure she saw that newbie look in my eyes, which worried her.

So I decided I did need some beads, but didn’t have a specific plan. I wanted them all! First I collected an assortment of colors in plastic tubes, then I put them back. I decided on bigger beads that came in strands – earth colors instead of the bright ones in the tubes – and then changed my mind again. The lady handed me a straw basket and helpfully offered to put things back for me (she probably figured I was putting them back wrong, which would be a real nightmare in this place). Then she went back to the counter and fell back into bead lingo with the other bead lady. This bead store was different from, but similar in many ways, to the yarn store with the yarn ladies (I wrote a story about them, too).
I kind of wanted to belong; but not too much.

After my third question that was stupid, “Why does the price tag say $3 on one side and $10 on the other side?” (Turns out $3 is the price and #10 is the size of the beads), and my second question that made the bead lady uncomfortable, “Do you have any skull beads?,” she decided to just leave me to shop by myself.

Until she heard that sickening sound: **POIK! skudder skudder skudder **– a rope of bead strands exploding in my hand sending millions of tiny beads flying behind the wall racks and all over the floor. I apologized, but I didn’t offer to pick them up, so sue me. I decided it was probably best to go on ahead and finalize my purchases and get the hell out of there.

But on my way to the register, I thought of something else. “Do you have thread or something to string these beads?” Duh; a whole wall of string, line, thread and wire in a hundred sizes. She answered me in a different language so I just grabbed some white thread and then asked, “Do people use needles to string beads?” Back in the hippy days we just used fishing line which was stiff enough that you didn’t need a needle to string beads.

She looked me right in the eye and said, “Do you want twisted wire needles or English beading needles? What gauge and length?” Okay, now she was just fucking with me. “I think short needles with a large eye,” I said, which I thought sounded good for a beginner. Tubes of beads, thread and needles and, $76 later, I was out the door and discovered a little Thai restaurant next door. Mentally exhausted, I ducked in there and ordered a beer and some vegetable curry.

I spread my purchases out on the table and opened the intricately wrapped packet of needles, which were microscopic and seemed to be pointed on both ends, until I held one far enough away from my eyes to see that there was actually an eye on one end. Finally got it threaded, when the waitress brought my cold beer, curry and a bowl of white rice. Ate a couple spoons of rice while waiting for the curry to cool, then – how to get the cap off this tube of beads? Using my teeth it came off suddenly, filling my mouth with blue beads. The waitress showed up in time to see me spitting blue and white rice into my hand. (Later the cook peered at me around the kitchen door, so the waitress must have told him) I swallowed some of beads; had no choice.

Carefully, I poured little piles of each color of beads on the table and started to string them. This is fun! Until the waitress set a bottle of hot sauce on my table and the beads shot everywhere. I can’t handle these tiny beads! I still had a lot left, but my little piles were now scattered all over the carpet. A bus boy came by with a carpet sweeper, but the beads just scampered in front of the vacuum and spread out even more. They’ll never get them up that way. I thought for a minute about suggesting they go talk to the bead lady next door, who probably knows all about the best way to clean up bead spills. But for some reason I didn’t want the bead ladies to know what I had done.

Left a good tip and headed back out into the hot afternoon to finish my errands in the Heights. Last night I dreamed that I made intricate beaded Rasta hats and sold them in a European open air market.

It was only a dream.

Ah, beading shops. It takes willpower not to buy out the whole inventory. So pretty, all the colors…

I think one of the most dangerous things in the world is to go into a bead shop “for inspiration.” I usually only go if I’m looking for something specific. I’m a seed beader, and seed beads are particularly dangerous. “Eh, these are only a couple of bucks a tube.”

You might want to spend a few of bucks on a bead board. It has grooves so you can lay out your beads and fiddle around with the design without the beads rolling all over the place.

You used your teeth to pull something open while you still had food in your mouth?

What are you going to end up doing with the rest of your purchase? Or what were you going to do before the beads ended up all over the floor… so sad!

I love this story! Though I’m a low maintenance, low nonsense kind of girl, I have to admit a similar mania when faced with rainbows of beads or rainbows of yarn. I heard Rickey Gervais say “Women. So mysterious! I con’t understand them. They do all these strange and magical things, like puttin’ things in tiny box-es.” Yeah, sometimes we do.

A Dutch auction is a type of auction in which the auctioneer begins with a high asking price which is lowered until some participant is willing to accept the auctioneer’s price, or a predetermined reserve price (the seller’s minimum acceptable price) is reached. The winning participant pays the last announced price. This is also known as a so-called clock auction or an open-outcry descending-price auction.

“I’m a Dutchman”; “Dutch courage”, “Dutch treat”, etc all come from the time of the 17th century when the Dutch were hated military and commercial rivals of the English. Other examples are; “Dutch auction” (where everything is backwards), “double Dutch” (ie gibberish) and “to go Dutch” (ie to pay for yourself), a variant of Dutch treat.

I got a male pal hooked on beading. I sent him a semirandom selection of mille fiore beads, some semiprecious gem beads, some large format seed beeds, beeding wire, a pliers set and odds and ends for some dreamcatchers, wire mandalas and jewelry - probably $50 worth of stuff out of my assorted stuff for Christmas. His girlfriend is thrilled

I love this story! Though I’m a low maintenance, low nonsense kind of girl, I have to admit a similar mania when faced with rainbows of beads or rainbows of yarn. I heard Rickey Gervais say “Women. So mysterious! I con’t understand them. They do all these strange and magical things, like puttin’ things in tiny box-es.” Yeah, sometimes we do.

I’ve been in these stores because they’re often suppliers of specialty plastics. They seemed to always be filled with young women. I assumed a lot of them were art students or making jewelry for sale, but some of them probably just enjoyed making things. We have a store nearby now that has not only beads, but all small decorating items such as the little people on top of wedding cakes and endless little plastic figures to decorate whatever it is people decorate (I’m a guy, we dont’ decorate much, mostly we just mark things). I can see these places are wonderlands for the artistic creative types.

I want a bead store!!! I have stores that sell beads but no actual bead stores. Not fair.

I love beading. And jewelry making. I make almost all of my own jewelry now, and in the long run, I do save money.

I get most of my beads online, telling myself I’ll only go to stores to see colors, textures, patterns, etc. in person. Riiiiiiight.

I’m not as into it as I used to be due to limited free time, but I do recall having dreadful dreams about my beads spilling all over the apartment. Or being dumped together into a giant ziploc bag. Ugh.

I love beading. And jewelry making. I make almost all of my own jewelry now, and in the long run, I do save money.

I tell myself that I do - but no, no I do not. And that’s just beads - when you add in yarn, it’s a whole extra universe of not saving money.

The past few things I’ve made have been pretty cool. But one, I haven’t had the opportunity to wear (it’s perfect for someone else’s, much less casual lifestyle), one is in a colorway that clashes with all of my clothing, and I have a great concept for the materials I just bought, but I think that they’ll be out of proportion on me, so I won’t be able to pull it off well at all.

Then there are the ideas that were great in theory, but didn’t quite work in execution - I have a few things that would look great hanging on the wall of a bead store, but absolutely idiotic on a human being.

I tell myself that I do - but no, no I do not. And that’s just beads - when you add in yarn, it’s a whole extra universe of not saving money.

Oh, I’ve macraméd.
I even tat and have “saved money” buying the beads and strings for beaded, tatted lace. There is absolutely no use in 2012 for beaded tatting except as an excuse for why I needed to buy more beads.

now you can really get your crafty groove going. 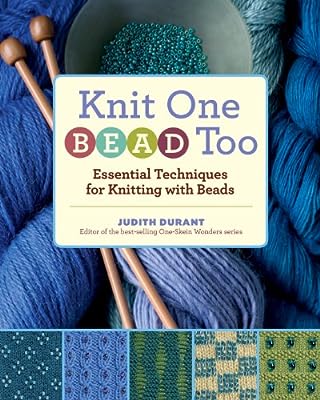 Knit One, Bead Too: Essential Techniques for Knitting with Beads

Oh, I’ve macraméd.
I even tat and have “saved money” buying the beads and strings for beaded, tatted lace. There is absolutely no use in 2012 for beaded tatting except as an excuse for why I needed to buy more beads.

I’d never heard of beaded tatting before this post.

I Google Image Searched it.