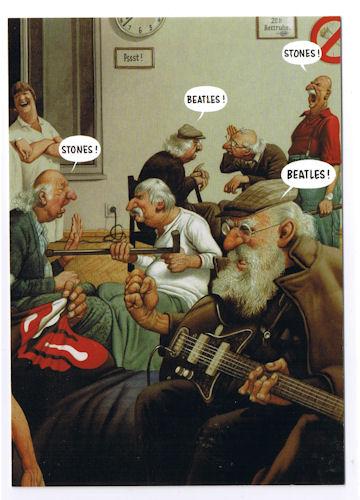 Also, it looks like the original art might be wider…I wonder if anyone can find it on-line?

Seriously. I often wonder if I’ll be the only one listening to Violent Femmes in the rest home.

Heh, the Beatles/Stones feud has been over for a very long time, at least since The Beatles broke up, if not well before. If (like me) you are really old enough to have been involved in that argument when it had some passion in it, by now you are nostalgic for the heyday of both bands.

There should be one geezer (maybe off in the corner) representing for The Dave Clark Five.

Oh come on. In the 70’s my sister found a dixie cup which read “What did The Beatles say during the rockslide?”

“Watch out for the rolling stones!”

I saw the thread title and thought of this song.