Buying a kettle, is there really a difference with the higher priced models?

I’m looking to buy a kettle to quickly heat hot water for tea, perhaps the occasional Starbucks Via, and use for those instant noodles that just require hot water.

I was surprised to see such a price range for a simple device. Is there any reason I need to spend money for an expensive one?

Here’s a sample of the price ranges.

I like the look of the red one. That handle might be a problem. My stove top kettle has a fold down handle it bugs me, sometimes.

My experience is that longevity is affected by price. I’ve gone through several of these. Here’s my latest purchase:

I am very happy with it.

One thing I would caution: Don’t buy one with a lid that operates with a push button. Those get gunked up and stop working way before they should. Get one with a manual removable lid.

It holds water, it boils water, it pours water. The scope for elaboration is limited.

There’s a bit of a difference in longevity and speed between the very cheap and the not quite as cheap- there’s broadly two different styles of heating elements, one’s more effective, but slightly pricier and some models do last better.

There are also fancy models that will, for example, heat to different set temperatures, rather than just to boiling; my former housemate bought one that had one button for boiling, and one that heated to a adjustable range, with an LCD display of the current temperature, it also had LED lights which changed colour when it reached the desired temperature. It was pretty easy to accidentally hit the wrong button, so you thought you’d turned it up, but what you’d actually done was put it in the mode to adjust the settings. I don’t recall anyone using it to heat water to any temperature other than boiling, except by accident, but it did look quite cool.

I’d recommend getting a metal kettle. There are many that are plastic, but there could be issues with chemicals leeching into the water and durability of the plastic from repeated heatings.

2 mins in a microwave will almost boil a mug of water.

Any longer and it will boil over.

I have a $17 Presto kettle that boils a quart of water.
Works great. I use it for guests when several mugs of hot water are needed. 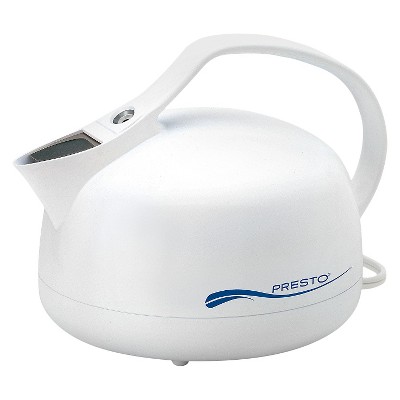 Free shipping on orders of $35+ from Target. Read reviews and buy Presto Electric Tea Kettle - 02703 at Target. Get it today with Same Day Delivery, Order Pickup or Drive Up.

I like the more upright design. The flatter kind, based on the look of a stovetop whistling kettle, often has the handle placed so that you scald your hand while pouring.

Whichever kettle you choose, if your water is hard, make sure you descale it regularly. I do it weekly, or I see flakes swirling in my tea. Ugh.