Calling educators-How to help with math

I know a 21 year old male who I believe is intelligent and above all has proven to be reliable and honest. His future however, if he choses to continue to work for me in my boatworks business is limited unless he can make a breakthrough in rudimentary math. I realize he was under pressure, but when asked to divide 70 inches into two was unable to respond. I knew he had difficulty with math and assumed whem left alone that he could muddle through but this latest failure has me really concerned. Any suggestions?

Get him a text book and have him do drills in whatever skills you think he needs.

Or did you mean divide seventy inches by two?

You could explain that his career is in jeopardy if he doesn’t learn math and recommend that he take basic math at the local community college. Additionally, the college may offer math courses specifically designed for people in construction/shop trades. Knowing that I wanted to go to grad school was a great help in easing math study.

If you want to tutor him personally, a good method is to show him how to do a problem. Remove it from sight and give him the same problem to solve himself. If he messes up, show him again and repeat. Make sure he takes all the steps, since shortcuts are lethal when taken too soon.

You could explain that his career is in jeopardy.

I think Ken Jennings has that sewn up

But seriously, I think the trade related math classes are a really good idea. That is common in other countries. I had a friend whose wife taught math to bakers in Germany.

I often recommend www.edhelper.com for parents searching for extra math resources for their child. The site contains material in all grade levels, and has games and vocabulary as well as basic worksheet type stuff. For your employee, something more visual may help him with concepts relating to fractions and division.

It’s worth a look. Access to the site is free; for $20 a year, you can subscribe and get answer keys (as well as multiple versions of worksheets). 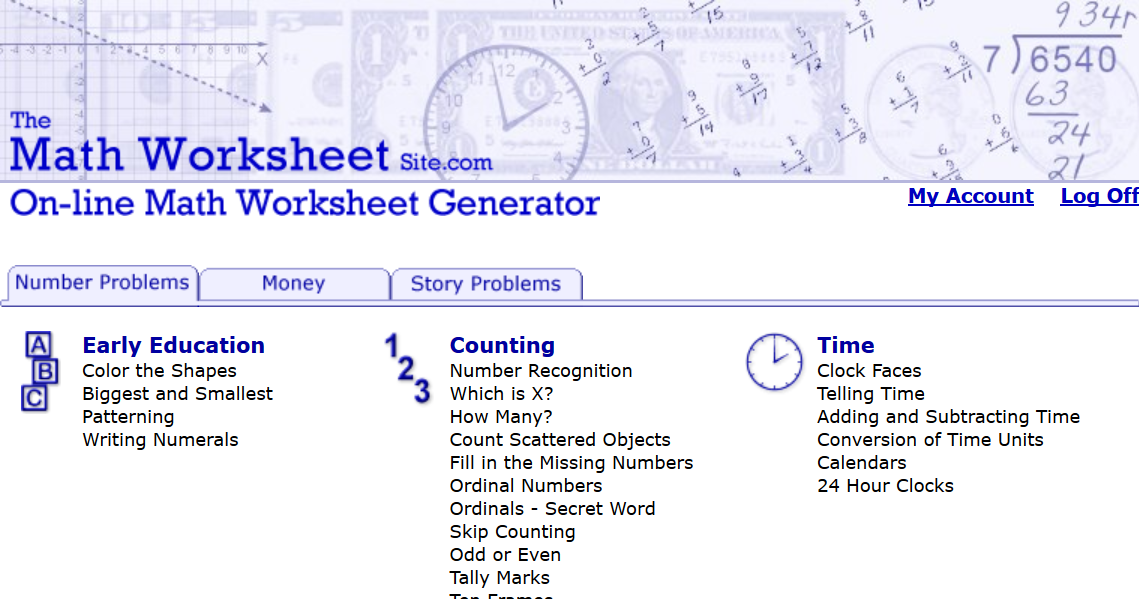 With The Math Worksheet Site you can create an endless supply of printable math worksheets. The intuitive interface gives you the ability to easily customize each worksheet to target your student's specific needs. Every worksheet is created when you...

This is a website I often use to generate special math worksheets for my kindergarten students. There’s a section called the five minute math drill with 100 single digit math problems you can create and then print out in subtraction and addition. My suggestion: give him both, time him, and see how he performs. If he misses more than 20 problems on each sheet, or takes significantly longer than 5 minutes to finish either, he may need help even a community college can’t provide.

what’s wrong with getting him a little calculator to use? It’ll work instantly, everytime, and while it looks bad for someone to have to use it for that question (although had you asked me that question, I would have said, 45, no 60 is 30, so 35, so you would have gotten a number of answers before you got the right one).

Is there something about boat building that disallows him to use a calculator? Or would that be too slow?

Larry Borgia was making a joke, but he may be onto something. Dependinding on how you stated the question, your employee may not have been at fault. My major was Computer Science so I can certainly do basic arithmetic. But if you had told me to divide 70 into 2 I would have hesitated also. 70 into 2 is 2/70 or 0.028571428571428571… and I had to use Windows calculator to solve that. I’m sure that you meant to say “divide 70 by 2” or “divide 70 into 2 parts” or something like that and that you were expecting the answer 35. If you did say “divide 70 into 2” then he may simply have taken you literally, hence the confusion. Do you recall exactly what you said?

I third the idea of making sure you stated the question correctly.

If it really is his problem, I might try to narrate how I figure out things like that (i had to make change in my head working at a gas station as a teenager).

Realistically, though, I’ve found in tutoring that if your student is the type to have trouble with 70/2, this explanation is very unlikely to know what you’re talking about. It’s going to take practice, and maybe lots of it.

People learn through practice, and things that are difficult are by definition learned through LOTS of practice.

Another person who wants to know how the question was stated. Math terminology changes. I am a smart cookie who has taken calculus and gotten a really good score on the GRE, but if someone asked me to “divide X into Y,” I wouldn’t know which number to divide by which. I only divide X ***by * ** Y.

Another person who wants to know how the question was stated. Math terminology changes. I am a smart cookie who has taken calculus and gotten a really good score on the GRE, but if someone asked me to “divide X into Y,” I wouldn’t know which number to divide by which. I only divide X ***by * ** Y.

Division is possibly the hardest operation to do (the problem understanding part). No Joke, in my Computer Science class I had to make a program (a math program for little kiddies), and I had to include division. Except it had to be in the long hand notation, but the output had to be in X/Y notation (like a fraction), which I took to mean 4/3 (four divided by 3, punching into calculator 4(->)/(->)3) as in four thirds or 1.3 or 1 remainder 1, however, that can also be interprited as if the 3 were under the long division divide sign, which would make the answer 0 remainder 3.

Long story short, I lost a few marks for doing division my way (which would have made sense if the kiddies were dyslexic or something, or interprited the long division sign as a fraction line)

I’m sorry for the hijack though. Believe it or not, in my HS Calculus class, I’m either tied 2 ways for second or 3 ways for first, but I can barely do mental math.

I understand where those who are concerned about my phrasing the question are coming from.

We were custom building a hardtop for a Campion Victoria 797. I’ve been on and on about the importance of symmetry, so I was demonstrating how to get the centre line point by taking a measurement and dividing by two. I knew he was slow in math, because he had problems determining percentages which is a skill that is quite helpful when working with composites. I am aware however that many people in my industry have this problem yet do get by if you don’t “harrass” them.

But the difficulty with the 70/2 problem really scares me. I did consider getting a calculator for him though.

I was hoping that maybe someone knew of a text that would be helpful to an adult to gain some rudimentary math skills.

A special thanx to Askia and Ruffian

Basic addition, subtraction, multiplication and division is driven home during 3rd grade, with more emphasis on memorizing rather than working the problems.

If he is a valuable employee in all other respects, I think a bit of a refresher course would help.

As a former homeschooling mother, may I recommend two things? First - flash cards. Second - this math book which focuses on the basics.

Perhaps as an incentive, when he brings each chapter of work completed to you, you could buy him lunch.

OOOoo. I am kicking myself for not thinking of flash cards.

Saxon math is an excellent series. Another good one is Math 4 Today.

Adoptamom_II is right about rote memorization in elementary math. But if you’re taught problem solving skills in the primary grades using manipulatives, you NEED to memorize those basic math so you can learn to compute two and three digit problems quickly and accurately.

I’ma little concerned that the materials we’ve suggested offer too much of a pedagogical approach for what is clearly an adult learning problem. Adults learn differently from children… so with that in mind, maybe a local community college is better equipped to offer remedial learning for adults than I was thinking earlier.

Thanks for the thanks, grienspace. Good luck.