Can a dim LED display in a coffee pot be repaired?

We bought a $150 Cuisinart coffee pot in Mid Jan. The most expensive drip pot I’ve ever bought. We were hoping for quality. Sigh … I should have known better. 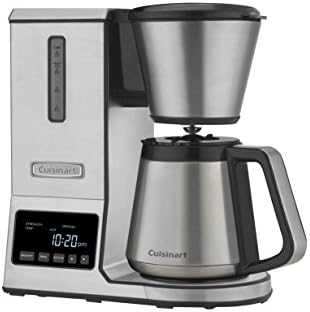 Ten months later the LED display has dimmed. I had to shut off the lights and close the blinds to read it. The display is crucial because we have to reset the brew strength and water temp after power failures.

First think I did was look for a dim option in the menu. Nope.

Does a led display require DC? I’m thinking maybe a bad capacitor in the power supply? The transformer would just fail. I don’t think it would just give lower voltage. I guess it could be the led itself but would it burn out after only 10 months? My hunch is it’s the DC power supply. I just hope it’s not sealed inside a plastic cube.

I’m hoping it’s a simple circuit on pcb and repairable. I serviced tv’s and stereo for 10 years.

We like the pot and would like to fix it. I don’t know what else to buy that won’t break any faster.

Complain to Cuisinart and ask for a new machine?

I am considering that. It’s supposed to have a limited three year warranty. If it’s bought from an authorized dealer.

I’ve heard there’s often warranty issues with Amazon. Companies like Cuisinart may not consider a seller on Amazon authorized dealers.

I think it’s too late to return to Amazon. We don’t have the box after nearly 11 months.

It’s due for a clean cycle. The icon is flashing. I wonder if that dims the display? I’ll run a clean cycle just for the he heck of it.

The company and/or Amazon can give an answer much better than internet randos. Try that first.

Less than a year old, fair chance of replacement by Amazon or Cuisinart.

If not, sometimes you can replace the display and sometimes it is just a bulb that needs to be replaced, though this requires soldering. Every device varies though.

Looking at the coffee pot from the link you provided, it might just be a bulb in this case. Are you comfortable opening up small appliances, using a multi-meter and soldering?

… It appears to be a LCD display, with a backlight. The backlight may be a LED array.

LED arrays dim with age: if this backlight has dimmed so much it is unusable after only one year, that’s a really crap design. Other possibilities are that the backlight or backlight diffuser has slipped out of place. or (my guess) that it has completely failed, leaving the LCD’s illuminated only by leakage from one of the other lights.

Because no backlight should fail after only one year, it is not normally a user-replaceable part.

Also, FWIW, I’d guess that it’s not the light that has failed. It’s either a wiring failure (corrosion?) or a power-supply failure. since the unit still works, not a full power-supply failure, just the part of the power supply that supplies the backlight.

They also have a 3-year from date of manufacture warranty: for that you don’t need to have original receipts, but you probably have to pay shipping. They may exclude devices sold overseas, but they don’t say that, and unless your device came with a strange plug, I wouldn’t think it would be a problem.

Do you still have the user manual with the phone numbers?

I have the manual. I’ll make some calls next week.

Not having the box may be a problem. I’ll see what Amazon says first. Then try Cuisinart.

I repaired a lot of tv’s and stereos in the 1980’s before shifting into computers. It’s been a long time since I actually replaced components on a pcb.

I’ve never had issues with not having the box. And for most Amazon sellers, it’s cheaper in the long term to trust you and send you a new one than to receive the broken one, and inspect for faults. If sending back items were a regular occurrence for you, this might change, but sounds like you don’t have any history of this.

Most consumer electronics these days are pretty much closed-system computers, so fixing is difficult anyways.

I had a Cuisinart toaster that failed within a year of purchase. I called them and explained what happened, and after taking my info, they just shipped me a new one.

They asked me to cut of the cord plug and send it to them, but I never actually did so, and didn’t hear boo from them.

Other than the annoyance of the toaster failing, it was a really lovely customer service experience.

Apparently, not an unheard of problem with this unit. In the reviews, I found a couple of similar complaints. After about one year (imagine that), one particular reviewer contacted Cuisinart, who offered to replace the unit for $10 if he returned the defective one. He spent over $40 shipping the old one back, but they did send a new one with a bright display. However…

UPDATE: The display on the replacement unit has now dimmed significantly like the original unit did. Rather than a defective unit I now know this is a defective design. Possibly poor quality display components. If being able to see the display in daylight is important to you then this is not the brewer for you. Even though it makes great coffee I also wanted a good clock in that location in my kitchen. My plan now is to use this one until the display completely dies than replace it with a better brand.

Unfortunately, modern electronics are not designed to be repaired. The TVs and Stereos of the 1980s weren’t really designed to be repaired, either, but they were designed to be assembled (and therefore, disassembled) by hand. Modern appliances are designed to be built by machine and are touched by as few human hands as possible. I suspect the display in this unit is a single, unitized module that is not practical to repair, so I’d imagine the OP will have no luck in repair attempts (although I’d love to see what he did if he is successful!).

If it was me, I don’t think I’d throw any more money at it. They might get me to send them $10 to ship a new one, but if they wanted the old one back, they would have to come and pick it up. I would go through Amazon instead of Cuisinart, though. My guess is that Amazon made more off this transaction than Cuisinart, so they can afford better service.