Can you identify this Roman/Medieval artifact?

My son picked this up for a few bucks at a flea market. The guy selling it seemed fairly honest about labeling stuff when he could identify it and letting you know when it was “something probably Roman” or “Likely medieval”, etc. Anyway, this was labeled as “Roman/Medieval” but he didn’t have any other info on it. I’m sure it got dredged up somewhere and sold in a bulk lot. 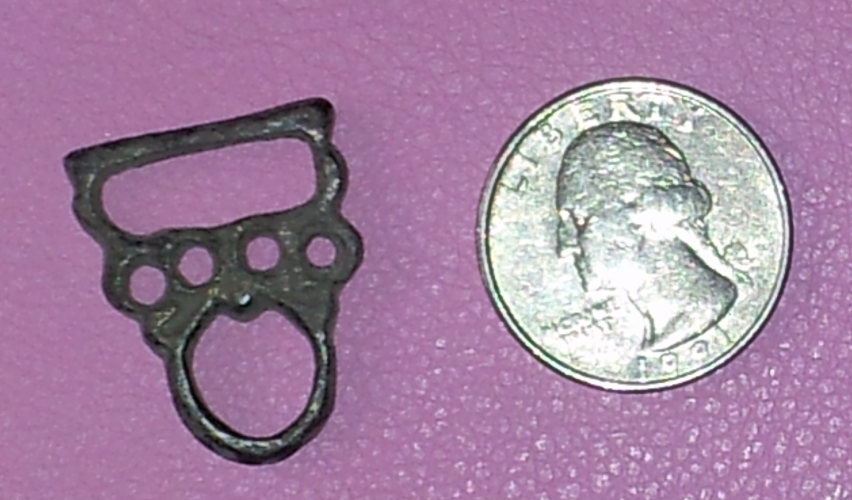 I’m pretty sure it’s bronze but, aside from that I’m at a loss. It could, of course, be some decorative bit like a pendant but I thought I’d throw it out there and see if anyone had a clue.

Could it be a shoe or sash buckle?

I sent the picture to a friend of mine who does this as a professional. I’ll report back when I hear from him.

Part of a clasp, the frog type, the other peice would have a rounded head that goes through the largest hole and hooks the other end, from the size of it for a clasp to a heavy leather type cloak. Without the other peice can’t be sure.

it looks like a ring/bottle opener from here, but the clasp idea is probably dead on.

a hobbit knuckleduster? too small. a buckle/clasp.

Seriously, it looks vaguely similar in scale to an old bridle buckle we dug up in our (Midwestern US) yard this summer, but the 4 holes wouldn’t make any sense for that. It also looks too delicate to be used with heavy strapping or for anything requiring great strength, so maybe a clasp for something made of fabric. In your photo, it looks like there is a decorative element cast into the piece (directly below the outermost holes).

Even if it didn’t start out that way, it would make a cool pendant :D.

He’s asking about the other thing.

He’s asking about the other thing.

Thanks, everyone. The clasp thing sounds the most logical but of course I invite any other ideas. Or lame jokes

Maastricht, thanks for soliciting the expert opinion! I look forward to seeing if there’s any extra ideas from it.

It’s not too small to be a small buckle/clasp.

Definitely a clasp or strap-end.

If it was scrounged off an old battlefield by a metal detector faddist, I would suggest part of the buckles holding armor together.

And I might point out that technically if it was collected by metal detector after 1971, it is considered looted unless it actually has the documentation with it.

I do not know what it actually is, but I seriously doubt that it is Roman, or even medieval.

It’s not too small to be a small buckle/clasp.

I was thinking bridle or harness fitting. Some of those buckles are teensy.