Can you install Windows 11 on a Samsung Galaxy Tab S8 Ultra?

The tablet has 16GB RAM and 1TB SSD for storage. I would like to run a particular illustration program and though an Android version exists it is much poorer than the one I use on my Windows laptop. Could I install Windows, perhaps on a separate partition?
Perhaps an emulation would be an alternative? The tablet’s specs seem to be quite powerful, could it handle an emulation and a complex program with big graphics?
Or will it be more trouble than it’s worth?
While I am at it: Why is file management on Android so bad, even compared with Windows? Is there an alternative?

My first thought is that you’d have to install it in a virtual machine. But I don’t know enough about the subject so I checked to see if I was on the right track. Oddly enough, I found a few recent articles saying that Win 11 can be run on a VM with Android 13.

One site also mentioned using a remote desktop into a Win 11 box, but I’m thinking that might not handle a graphics heavy program very elegantly.

Is there a Linux version of your the program you want to run? I feel like running an illustration program on linux in a virtual machine on an android tablet has a better chance of success than trying to stuff Windows 11 in there. But I could very well be wrong.

I am talking about Clip Studio Paint and no, there seems to be no Linux version available.

Thanks, sounds interesting if not encouraging, but am I missing a link?

I get the impression you have be a lot more of a hacker atm to get Windows 11 to run on a Galaxy Tab S8 Ultra (though I am sure people are working on it as well). What is described in that post is something else: getting Clip Studio Paint to run under Wine (assuming you can get Wine to run on your Linux or Android system)

Thanks a lot! After one quick glimpse I can say the guy knows better than me what he is talking about! Looks like work, but it is promising.
ETA: Of course I had never heard of Wine before. That is what looks like work.

While I am at it: Why is file management on Android so bad, even compared with Windows? Is there an alternative?

There are numerous file management apps for Android out there which expose the filesystem, but they don’t really solve the problem that other apps can only put their files in particular locations.

As for the original question, you might consider a cloud-based PC. It’s just renting a PC from someone else, and you can run an app on your tablet or otherwise to get access. It will cost some monthly fee, but you can get basic ones on the order of $10/mo. I’m not sure if your program has very high requirements, though. If you need more RAM, multi-core, etc., the rental fees go up.

Tthe Galaxy Tab you have is ARM based, like most tablets. In that case, I wouldn’t get your hopes up about Linux + Wine. Sure, there are ARM versions of Linux, but Wine depends on the x86 instructions to run x86 programs. And most Windows programs are x86-only.

There is technically a version of Windows for ARM, which will include an x86 emulator. However, it’s sold as OEM-only, and tends to require manufacturer support to get all the drivers and such for a tablet.

It’s not impossible, but it’s probably more trouble than it’s worth. (Especially since dual booting is a huge pain on tablets) The cloud computing option is more viable, if you’re willing to pay monthly for it. And you could set up your own PC to work similarly, assuming you have the upload speed to pull it off.

But, even then, it may not actually be worth it. If the app doesn’t have a good touch-based interface, the cumbersome aspect of usage may make you long for the lesser Android version. Maybe if you have one of those special pencil type attachments or something you could pull it off (and I don’t mean the weird little nubs).

The Galaxy Tab supports the “S Pen”, which seems like a pretty good fit for a graphics program. Android also supports just hooking up a Bluetooth mouse/keyboard. That is getting a little janky for a tablet, but I don’t know the exact use case here.

I was Googling the thread title to get the specs on the tablet and the first real hit was this video.

The TLDR version is to run Windows360 on it. The actual OS runs over the Internet with just a window on the tablet showing the GUI.

The Galaxy Tab supports the “S Pen”, which seems like a pretty good fit for a graphics program. Android also supports just hooking up a Bluetooth mouse/keyboard. That is getting a little janky for a tablet, but I don’t know the exact use case here. ⁢

Yeah, that’s the sort of thing I was thinking about. That might make the cloud services idea (including Windows365) into a viable option for the OP.

but they don’t really solve the problem that other apps can only put their files in particular locations.

I would say that a larger percentage of my apps let me choose file location than don’t.

It’s not impossible, but it’s probably more trouble than it’s worth.

That is what I fear.

That is the big advantage of the tablet vs. the laptop. And it has a detachable keyboard with a trackpad. It looks more like a laptop than like a tablet, but it is at heart a tablet: Android. But I saw 16 GB RAM and thought, if not for graphics, what can you use that for? Only graphics programs for Android look weak to me. The ones I know, at least. Even Clip Studio Paint is tuned down compared with Windows and iOS.

The TLDR version is to run Windows360 on it.

That sounds interesting and feasible. Even the accent is familiar! Thanks a lot!

Wow. That is a bit above my level, but it looks impressive. I love it when people have the knowledge to try out things like these and then put it on line. Reminds me of what the internet used to want to be.

I’ll have to take your word for it. Essentially none of my apps allow that. For instance, I have the folder /storage/emulated/0/Pictures/Screenshots. As you might imagine, that’s where screenshots go by default. However, Firefox does not allow downloading images to the Screenshots dir. In Google sheets, I can export a document to my Google Drive, but cannot access local storage at all. Adobe Lightroom can import photos from my Screenshots dir, but cannot export back out to the same dir. Etc.

Many, perhaps most apps have no storage access at all. All of their data is contained within their own private storage. If you’re lucky, you can share the data to some external source (usually not the filesystem) one at a time.

Of course, using a file browser like Cx File Explorer, I can see the full filesystem. Aside from dedicated file browser apps, I’ve never seen another app that just shows everything like that.

I would say that about half of the users encounter have no idea how to use a hierarchical file system. About 25% can’t find the start button.

I’ll have to take your word for it. Essentially none of my apps allow that.

It is common in the programs that I use often, and I didn’t choose them for that feature. For instance, my main photo editor (creatively named Photo Editor, not to be confused with the second photo editor on my phone that is named Photo Editor) not only allows you to navigate through the file system but requires it—no option to just have photos show up, not knowing where they come from. You always choose where to save your files with a file manager. (The other Photo Editor scans the system and presents a list of folders containing images, without showing the folder hierarchy, and doesn’t allow choice of save locations.) It is common (but not universal) in the media viewers to be able to choose the input and output locations for files from a hierarchical file manager, and for editors to offer the same for save locations, either set once in the settings or every time you view/edit a file. Moonreader + lets me choose ebook import folders and storage folders. Comicat lets me choose comic/manga folders. RAR has me choose location in opening and saving compressed files. Ffmpeg Media Encoder does the same for videos.

Here are screenshots from 8 of my Android apps: 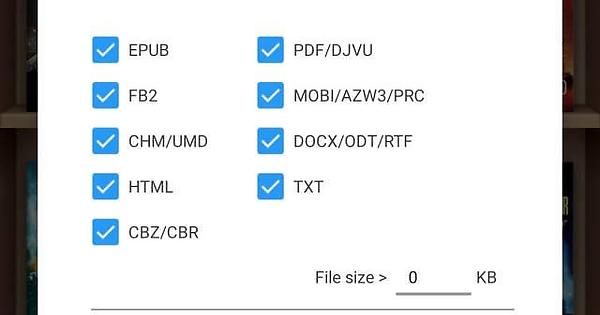 It is common in the programs that I use often, and I didn’t choose them for that feature

Maybe not, but it does seem like the types of apps that interest you are going to have that naturally. For instance, it’s not too surprising that a generic comic book browser might have a file browser. Without looking, though, I predict that the official Marvel or DC comic apps have no such functionality. Same goes for a generic e-reader. Something intended to view e-books transferred through diverse means would need a browser, but the Kindle app just uses its own database.

I suppose if I used my phone for anything important, I’d seek out programs with more functionality. But I have a PC and laptop for real work.