Just reported yesterday, so not much more known than in the initial news articles: 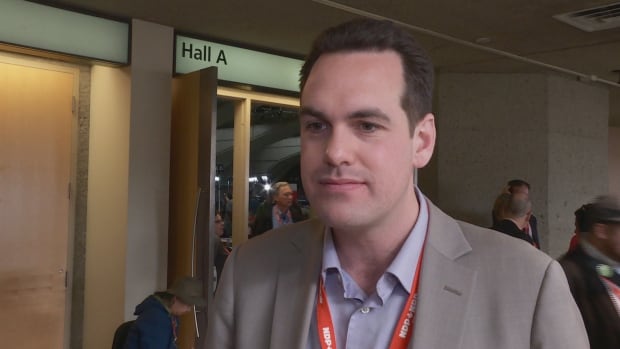 NDP Leader Jagmeet Singh announced there will be an independent investigation into an allegation of "harassing behaviour toward women" that has been made against NDP MP Erin Weir.

• Story is that Weir sent an e-mail to the NDP caucus, announcing his candidacy for caucus chair.

• Another NDP MP replied that as a woman, she would be afraid to be alone with him and did not think he should put his name forward.

• Weir says he thinks the allegation is politically motivated, doesn’t know what the complaint is about, and looks forward to clearing his name in the investigation.

Sounds like everyone in the party leadership knows what happened, but they’re going through the motions anyway for the sake of appearances.

Weir is our local MP so I’m following the story with some interest.

And he’s been expelled from caucus. He says it’s not becacuse of the harrassment allegations, but because he talked to the media before the formal announcement was made.

However, the NDP leader, Jagmet Singh, has released a statement saying that four complaints were substantiated by an outside investigator.

Singh is supposed to be giving a media conference soon.

Saskatchewan MP Erin Weir, who was under investigation following harassment complaints, has been expelled from the NDP caucus. But Weir says he is not being kicked out because of the report's findings, but for speaking to the media.

thought it was a woman. First time I’ve seen a man named Erin

The NDP leader said that after reviewing the findings of the third-party investigation, he attempted to pursue a rehabilitative process with Weir that would allow him to stay in caucus if he would take responsibility and complete anti-harassment training. Weir, in a statement, claims he agreed to this.

However, citing “recent developments,” Singh told reporters Thursday that approach would be “untenable,” as Weir demonstrated he was not ready to take responsibility, and as a result, has been removed from the NDP caucus.

On CTV’s Power Play on Thursday, Weir also emphasized that there were no allegations of comments that were sexual in nature, rather they were allegations about Weir’s physical proximity and engagement in conversations with others for longer than the other person wanted.

Weir has also said that he thinks the investigation process was deeply flawed, but at the same time made him aware he “was sometimes slow to pick up on social cues.” He has apologized to anyone he made uncomfortable.

Announcing his ouster from caucus, Singh said Weir failed to read nonverbal cues in social settings, resulting in “significant negative impact to the complainants.” Though, once told his advances were unwanted, Singh said Weir stopped.

IOW it’s a politically motivated put-up job. Some people don’t do non-verbal; I’m one. When he was asked to stop he did.

Sounds like everyone in the party leadership knows what happened, but they’re going through the motions anyway for the sake of appearances.

thought it was a woman. First time I’ve seen a man named Erin

Its a name like Robin, can be a boys or girls name.

Weir is our local MP so I’m following the story with some interest.

If he went independent or crossed the floor would you still concider voting for him.

I don’t talk about my voting patterns on the internet.

I don’t talk about my voting patterns on the internet.

No biggie. Of course, unlike the States, my partisan affiliation (if any) is not a matter of government record.

Right, the news now is that another NDP MP has been suspended from caucus pending an allegation into sexual harassment.

And the MP in question is the one who made the allegation against Weir that triggered the investigation and his suspension.

NDP Leader Jagmeet Singh has suspended caucus member Christine Moore from her duties while the party orders an investigation into allegations she behaved inappropriately toward an Afghanistan veteran five years ago.

Glen Kirkland told CBC the Quebec MP approached him after his testimony before a parliamentary committee in 2013 and invited him to her office, where she gave him alcohol, then followed him back to his hotel and later sent him explicit messages.

Kirkland alleges Moore, a nurse, offered him gin even after he told her he was taking antidepressants and painkillers, and was not supposed to be drinking.

He also claims the Abitibi—Témiscamingue member of Parliament continued to send explicit messages and in July 2013 messaged him that she’d arranged a trip to meet him where he was playing golf with friends in Saskatchewan.

It was during that visit, Kirkland said, that he told her “this is not happening.” He alleges she still turned up at his Brandon, Man. residence a few weeks later and he had to be “curt” with her.

NDP MP Christine Moore suspended from duties after being accused of inappropriate conduct - Afghanistan veteran from Manitoba says Moore “took advantage” of him after emotional testimony on Parliament Hill in 2013.

In an interview with the Star Tuesday morning, Kirkland alleged Moore “took advantage” of him after he delivered emotional testimony about his combat experience at a committee hearing on Parliament Hill. He said she invited him to her office to discuss his health concerns, because she was a registered nurse. Kirkland said she poured him gin as he told her about his medication and that he wasn’t drinking very much. She then “followed” him to his hotel when he left her office, he said, alleging he felt a “big power imbalance” because he was an army corporal and she was a member of Parliament.

“I’m not claiming rape or anything, it was just real — it’s disturbing,” said Kirkland, 34.

“I was an emotional mess then, and she totally — there’s no question about it — took advantage,” Kirkland said. “I thought I made it pretty clear that I wasn’t interested. But she kept pressuring me… It was very self-guided by her.”

Kirkland, meanwhile, said he was “sick to my stomach” when he learned Moore was the person that initially accused Weir of harassment. He said Moore pursued him even though “there was a lot more than just social cues for her to pick up on.”

“She was making the accusation on behalf of other people,” he said. “Who put her in that moral authority?”