Carbonated beverages - how unhealthy, and why?

Carbonated beverages are, according to many, unhealthy. Why? Is carbonation per se unhealthy, or is the problem that they are typically sugary water with a little flavor and maybe caffeine?

Is plain carbonated water - that is, a solution of CO2 in H2O with nothing else - unhealthy?

Carbonated water with salts added might be bad because of the salts, granted. The names for these different things seem to vary, especially regionally, so if you know something about “seltzer” or “soda water” or similar things, please specify exactly what it means, too!

I believe that, for one, the carbonic acid has a bit of an effect on the teeth. I know a lot of dentists that tell me to drink soda through a straw, and they never base it on the sugar content.

Carbonated beverages? Well, the full-on sugary and caffeine-laden versions are the bad guys, and with little argument about that point. Apparently, others have been implicated by association.

Some ‘experts’ don’t like diet sodas, as they feel they can affect one’s insulin levels (which cause hunger spikes).

The whole acid thing is open to debate, too.

Relatively speaking, it’s always safer to recommend water and non-sugary, non-acidic drinks instead. And when choosing one’s beverages, keep in mind that is a very solid argument against drinking any meaningful calories (one should not consumer calories via their drinks).

In the end, if you look at overall trends, lifestyles and cultures,** the sheer quantity of food available** to many people in developed nations, such as the U.S., overwhelms any point in looking for some magic bullet (Oh, sugary sodas are to blame!).

How can a bit of carbonic acid that is immediately sent to the (acidic) stomach damage the teeth? More, say, than some tomato sauce that, to some extent might, stick. If artificial sweetener really causes an insulin spike, I’d like to see a good cite.

Non-diet soft drinks are bad for your health for several reasons.

High caloric content/low satiety index - You can drink a lot of calories and still have room for more, meaning that soft drinks contribute to obesity. Nutritionists will often recommend cutting soft drinks from your diet as the first thing you should do to lose weight, as it is a huge source of non nutritive calories. 1 soda per day = 150 calories per day = 4500 calories per month = 54000 calories per year = about 15 pounds of fat per year.

Highly bioavailable sugar (eg high glycemic index) contributes to insulin resistance more readily than low glycemic index sugar. Granted, total sugar consumption is far more important than glycemic index. This bit is more speculative than the rest. Here is a cite, which is far from conclusive, in my opinion.

A low glycaemic diet improves oral glucose tolerance but has no effect on...

Together, our data suggest that the impaired glucose tolerance seen after a high glycaemic diet is not explained by altered β-cell function.

pH and chelating agents damage teeth - This one is pretty conclusive. There are two big ways soft drinks can go bad. Bacterial growth, and oxidation of volatile oil flavor compounds. Calcium is a potent catalyst for oxidation reactions. To prevent premature oxidation, manufacturers put citric and phosphoric acid into their soft drinks to chelate the calcium and prevent it from catalyzing the oxidation of volatile oils. The problem here is that your teeth have a lot of calcium in them as well, and the citric acid chelates that calcium just as well as it did in the can. The reason why fluoride is good for your teeth is that it forms stronger bonds than calcium does and resists this kind of decay. pH also acts in the same way.

How can a bit of carbonic acid that is immediately sent to the (acidic) stomach damage the teeth?

Your stomach is meant to be at a low pH. Your mouth isn’t. Conditions which cause chronic vomiting, such as bulimia, also cause tooth decay by means of repeatedly exposing teeth to low pH. It doesn’t take a leap of faith to see how exposing your teeth to soft drinks might cause tooth decay over long periods of time.

Here is a fun experiment. Take a tooth and put it in a glass of coca cola for one week. At the end of the week, it will be completely dissolved. Here is a video of a tooth spending one day in coke:

Artificial sweeteners are bad - FALSE (with some exceptions). There are a lot of sweeteners which have no media hype surrounding their negative health consequences. A short list would include acesulfame potassium, sucralose, and various sugar-alcohols. The big controversy regarding artificial sweeteners revolves around aspartame, which is a dipeptide consisting of aspartic acid and phenylalanine. Aspartic acid is an excitatory neurotransmitter which acts in a similar fashion as glutamate in the ventral spinal cord. High doses of aspartic acid can cause anxiety, headache, nausea, and vision problems. The problem is… is that you need a LOT of aspartic acid to cause these side effects. A can of diet coke contains about 130mg of aspartame. Only about 40% of that is aspartic acid, so there is roughly 50mg of aspartic acid per can of coke.

Whats the take home message? Soft drinks aren’t good for you. Regular soft drinks contribute to obesity and all soft drinks damage your teeth over time. That being said, soft drinks aren’t made of rat poison either and the hype about the dangers of aspartame is just bullshit. So go ahead and enjoy your soft drinks, but enjoy them sparingly.
Side notes:
Saccharin and cyclamate have been shown to cause bladder cancer in rats. Some problems with that finding is that the concentrations you need to cause bladder are much higher than one would reasonably expect in real life, and that rats are predisposed to bladder cancer to begin with. Even still, I personally avoid these sweeteners as there are good substitutes available.

Here is what coca-cola does to polyethylene terepthalate utensils: 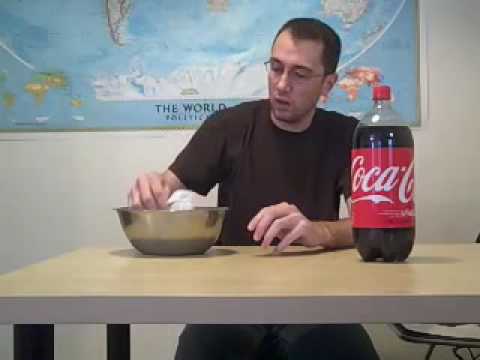 Great post, heavyarms553. Basically what I was going to say, plus a lot more detail.

Lotsa sugar == bad.
Artificial sweeteners == no big deal.
Too much acid can hurt your teeth over time.

>The dissolving tooth video is a scam.

>The am’t of acid in something like Coke is no more than citrus fruits/drinks.

> polyethylene terepthalate: isn’t that the stuff that plastic soda bottles are made from?!

Someone’s been scammed or is scamming us.

Is plain carbonated water - that is, a solution of CO2 in H2O with nothing else - unhealthy?

Since the flavored stuff (sugar-water = bad) has been covered, I’ll take this. Plain carbonated water will be acidic. Carbonated to typical soda concentration it will have a pH of 3.7 according to wikipedia. This compares to a pH about 2.5 for cola (due to the phosphoric and citric acids).

So even unflavored carbonated water will be acidic. A seltzer or something might be a little less carbonated than soda, so a little less acidic. Not nearly as bad, dissolving-your-teeth-wise as cola, but maybe not something you want to expose your teeth to 24-7.

>The am’t of acid in something like Coke is no more than citrus fruits/drinks.
.

Well, yeah, but sucking on lemons all day long will also damage your teeth.

Heck, your stomach is only a little more acidic than Coke/lemon juice, but just vomiting regularly is enough to damage your teeth (and there are case histories to prove it). I suspect people tend to hold vomit in their mouths for shorter periods than Cola.

Regarding artificial sweeteners, I read something not that long ago that suggests that they are worse from the satiety standpoint than regular sodas - they inspire you to ingest more calories. I think that was preliminary and don’t have a cite handy.

Here is what coca-cola does to polyethylene terepthalate utensils:
http://www.youtube.com/watch?v=5V0biBg7xzU&feature=related

So, coke dissolves it’s own containers?

That video is awesome.

I was jumping around looking for the guy’s mistake (figured he was using biodegradable utensils or something) and totally missed the joke the first time through. He’s even playing it straight in the comments.

He puts a bunch of forks and spoons in the bowl, and pulls out a spork and says “the utensils have bonded together, creating just one type of utensil.”

Isn’t it also the case that carbonation tastes sour, so the drink gets more sugar added to it than it would need without carbonation? I know whenever I’ve tasted flat soda it seems undrinkably sweet.

Yeah for the people who got whooshed, the last video was supposed to be a joke = ). PET wont dissolve in soda.

Link to Snopeson Coca-Cola and Teeth.

I once knew a lady who showed me a dead fish in a jar of coke. She was keeping it to impress upon her young son the corrosive dangers of drinking coke. Looking at that half-decomposed fish kind of put ME off soda for awhile. But I bet orange juice would have been just as effective.